Throughout the first half, Tennessee was seemingly banging their collective heads against the wall offensively -- lining up in obviously running formations, motioning receivers in towards the formation for crack-back blocks, then futilely running the football into the strength of the Alabama defense. It looked like a terrible strategy. However, with the aid of a few plays in the passing game in the second half, the Vols were able to control the clock by running the football, eventually possessing the football for much of the first 20 minutes of the second half. Had Tennessee been able to put points on the board during those two long drives, the outcome of the game might have been different.

The long drives were not possible without some ineptitude by the Alabama offense, however. On both of the first two possessions in the second half, the Tide offense was unable to pick up a first down, going three and out both times. The first drive even began with a great deal of promise -- the sensational 'Bama punt returner, Javier Arenas, broke two tackles after seemingly being boxed in near the sideline, then broke out to the wide side of the field for a huge return of 23 yards, aided by a 15-yard penalty on the Volunteers near the end of the run. The Tide began the drive inside Tennessee territory. 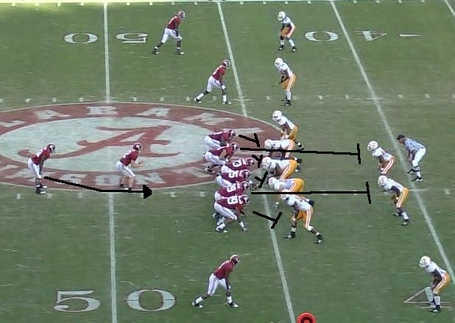 Alabama starts the second drive in the Pistol formation with Ingram lined up behind McElroy, two wide receivers split to the top of the screen, and one wide receiver and a tight end split to the bottom. As usual in this game, Tennessee lines up with one more defender in the box than Alabama can block (a five-man front with two linebackers), with only one deep safety and the cornerbacks lined up in what appears to be man coverage. This is a man blocking play clearly shown by the low hats and three-point stance of the offensive linemen. From the position there are in, the offensive linemen would have little chance to pass block. 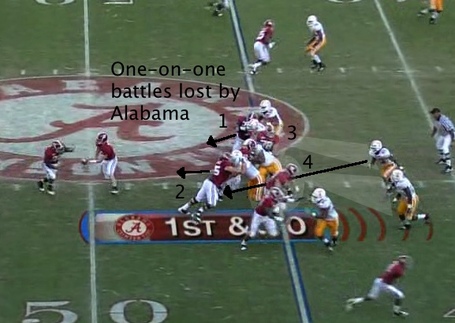 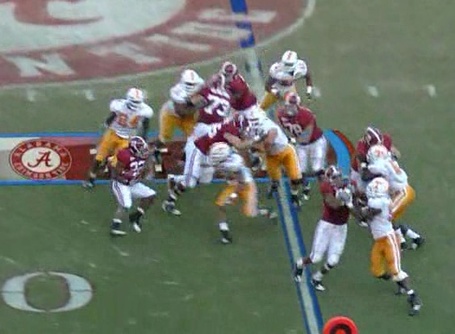 The penetration into the backfield keeps Ingram from getting through the line of scrimmage quickly as the linebacker flies through the open gap, forcing to Ingram lose his momentum and make a cut. Ingram gained no yardage on the play. 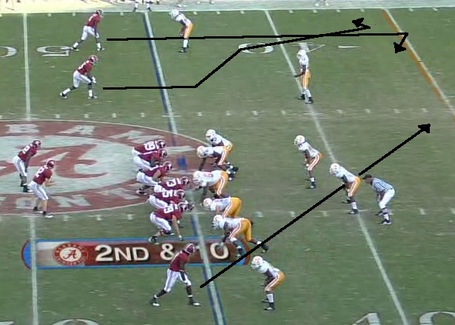 The Tide now move to a shotgun look with Ingram on McElroy's right and the tight end and two wide receivers to the wide side of the field, with Julio Jones as the split end to the bottom of the screen. There are now four down linemen for Tennessee with a safety walked up to the line of scrimmage to the strong side, with two linebackers once again and a single deep safety, with the cornerbacks appearing to line up in man coverage. 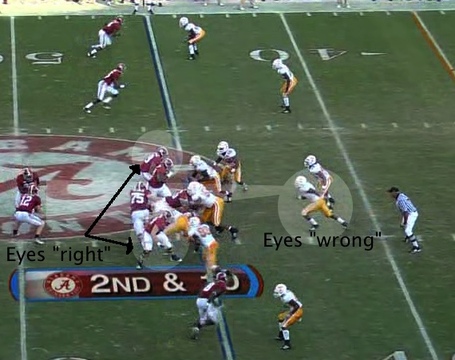 Alabama play-action passes, while pulling the right guard across the formation to block for McElroy as he bootlegs left. Notice that both linebackers bite hard on the play fake, looking at the running back instead of watching their keys -- either EMLOS (End Man On Line Of Scrimmage). Both of them are clearly pass blocking and the Tennessee linebackers get themselves out of position because of a lack of discipline. 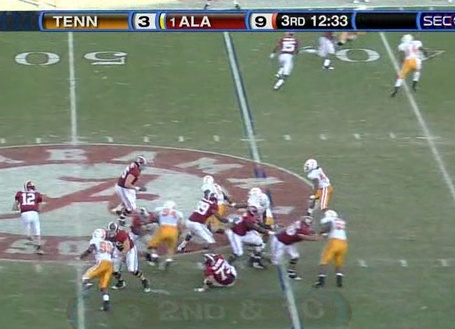 The outside wide receiver on the strong side, Marquis Maze, releases downfield, while the inside receiver Martin Hanks heads outside to get a rub from Maze, then heads upfield himself before running a hitch -- a difficult play to cover man to man.

McElroy sees Hanks all the way and makes a nice, accurate throw on the run moving to his left for an eight-yard gain. 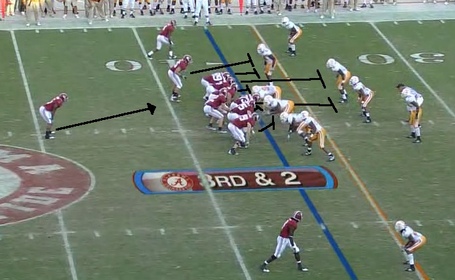 Now with a third and short situation in which they feel comfortable, Alabama lines up with McElroy under center and a tight end and receiver to the short side of the field, with an H-back lined up just wide of the tackle and behind the line of scrimmage and another receiver to the wide side and Roy Upchurch lined up as a running back seven yards deep. Tennessee shows a five-man front with three down linemen and two linebackers, with a safety deep and the other safety walked up to linebacker depth, once again with one more defender in the box than Alabama can block. The H-back comes motion from right to left across the formation before the snap. 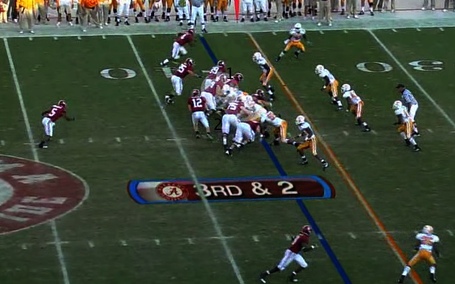 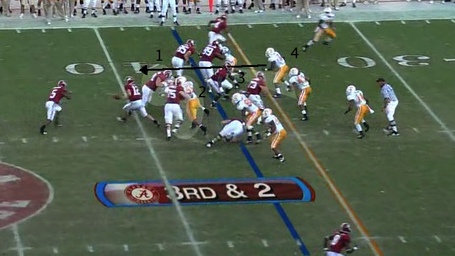 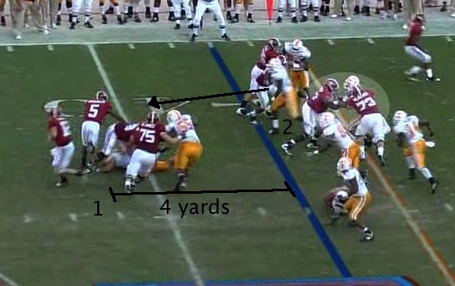 It may come as a relative surprise, but Alabama runs much less I formation than one might expect from a team with an identity forged around being a power-running team. Instead, Jim McElwain prefers to use two tight ends or a tight end and an H-back, while also playing a lot with three wide receivers. Likewise, while Alabama does like to run power, many of the running plays use a zone-blocking scheme -- though Ingram and Richardson are most certainly downhill runners of the most physical degree, the offensive line spends quite a bit of time reach blocking.

In an effort to stop the Alabama running game, Monte Kiffin repeatedly loaded the box with one more defender than Alabama could block, leaving one safety deep in coverage and putting his cornerbacks on islands in man-to-man coverage. It was a calculated risk, but one that generally worked, as Alabama was mostly unable to gash them in the passing game. Texas will almost certainly employ a similar strategy in an effort to stop Ingram and Richardson.

On this drive, the interior offensive linemen were not able to make their blocks, getting physically dominated at the point of attack. They ran the same play twice in three plays and the right guard got knocked backwards twice and the left guard once. In addition, the left tackle missed a block in space by making a poor decision. The major surprise is to see Alabama get physically dominated in a situation in which they supposedly excel -- third and short.

The tradeoff for Alabama with that play is that if the interior linemen don't hold their own, then the play can get blown up quickly. Lamarr Houston and Ben Alexander have to be salivating to go up against the guards and center for Alabama because they know that they can win some of those match ups. But, if the interior can hold up and two linemen can get to the second level and get blocks on the linebackers, then these plays can go for big gains and the Tide can get the running backs matched up against defensive backs, a major advantage for Alabama. Who really wants to see Blake Gideon or Curtis Brown attempting to tackle Ingram two or three times a game apiece?