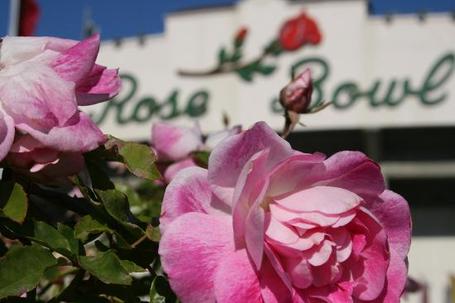 Tuscola is bursting with Pride.

The road sign on Route 83 that welcomes you to Colt McCoy's hometown needs updating because it states, "Tuscola, population 714."

"It's pretty neat how it's all worked out," McCoy said. "We've all worked pretty hard to get to this point. The Rose Bowl is the same point we started as freshmen. And that's pretty cool."

Earl Thomas is a musician. And he plays a little football.

At West Orange (Texas) Stark High, Thomas read both offensive schemes and music sheets on Friday nights, playing football before shedding his pads and joining the band for the halftime show.

"It was kind of embarrassing," Thomas said. "We were a small school, so there were maybe 30-35 people in the band. I'd take off my shoulder pads and helmet and march in my cleats."

Football is not the future the Achos envisioned for their sons.

The original plan called for the two to attend St. Mark's School of Dallas, a college prep school known for its academic focus, followed by an Ivy League school.

Then Sam Acho started to grow, from a stocky sophomore to a 6-3, 250-pound defensive end as a senior. TCU and Northwestern sent early letters.

The family was forced to make a decision. Family friends and people in the St. Mark's community wondered if a football career was the right direction. Sonny Acho, a psychologist and pastor, and his wife, Christie, a nurse, had strong academic backgrounds.

Mack Brown is finally comfortable in his own skin.

He is more relaxed than ever, less likely to yell, more comfortable in his own skin, less insecure about criticism. But he's not here in California to serenely enjoy the ride. He is grinding hard in preparation for playing Alabama.

But it never really ends for the Longhorn head coach.

Four years ago today, as Texas football coach Mack Brown left a news conference, he was stopped by a fan wearing burnt orange. It was the day after the Longhorns won the school's first national title in 35 years.

"You have a free pass for the rest of your life at Texas," the fan told him. As Brown and his mentor, fabled coach Darrell Royal, walked away, Royal said, "Hell, that ain't true. You got six months before you better start winning again."

We are in the golden age of UT football.

I remember thinking as a child how sad it was when old people reminisced about the "Good Old Days." I always thought maybe a good idea would be to recognize when the "Good Old Days" are actually happening and enjoy them then, rather than when you're missing all your teeth. That sure seemed like a better deal.

Well, if you are a University of Texas football fan (or basketball or baseball fan, for that matter), those good old days are happening right now. Regardless of whether the team wins or loses the BCS National Championship Thursday night, Longhorn fans should be soaking up every second of what's going on right now. Bless the football gods for sending us Mack Brown. The turnaround for UT’s football program under the UT head coach has been nothing short of remarkable, especially over the past six years. If Texas wins Thursday, they will be 6-0 in their last six bowls (including four BCS Bowl games) against other stalwart programs including Michigan, USC, Alabama and Ohio State.

Alabama has seen the film.

The Alabama defenders have done their best to downplay all the pressure Nebraska got on Colt McCoy a month ago.

The Huskers sacked McCoy nine times, 4 .5 of those by star tackle Ndamukong Suh, and kept the Texas quarterback on the run the entire Big 12 championship game.

Yes, the Crimson Tide have seen that film. Yes, they see their own opportunities to get after McCoy. No, they’re not really making a big deal of it publicly.

What a lovely thing to say. It is easy to like Alabama QB Greg McElroy.

"I always rooted for Texas in that game," McElroy said, "because I cannot stand Oklahoma."

And about all those rumors are going to swirl around when there are job openings...

"It seems people have a hard time with someone liking where they are," Will Muschamp said. "I've had opportunities to be a head coach. I'm not a guy who wants to just put head coach on my table and say I'm the head coach. I want to be a head coach at a place where you can win it all, and I think that's Texas. I'm not looking for any other job. I like the one I've got."

Now things can get going. Bevo is in LA.

A good day for Bevo really doesn't have anything to do with football or stadiums.

No, according to his owner Betty Baker, a good day for the 2,000-pound steer involves plenty of green grass to eat, balmy temperatures and his longhorn buddies around him.

It is official. We will win. Well, according to Bruno...

If you own an iPhone, you need this.

Beat the hell out of Bama.