Throughout the first half, Tennessee was seemingly banging their collective heads against the wall offensively -- lining up in obviously running formations, motioning receivers in towards the formation to into crack-back blocks, then futilely running the football into the strength of the Alabama defense. It looked like a terrible strategy. However, in the second half, the Volunteers, with the aid of a few plays in the passing game, were able to control the clock by running the football, eventually possessing the football for much of the first 20 minutes of the second half. Had Tennessee been able to put points on the board during those two long drives, the outcome of the game might have been different.

The long drives were not possible without some ineptitude by the Alabama offense, however. On both of the first two possessions in the second half, the Tide offense was unable to pick up a first down, going three and out both times. The first drive even began with a great deal of promise -- the sensational 'Bama punt returner, Javier Arenas, broke two tackles after seemingly being boxed in near the sideline, then broke out to the wide side of the field for a huge return of 23 yards, aided by a 15-yard penalty on the Volunteers near the end of the run. The Tide began the drive inside Tennessee territory.

When Alabama finally got the ball back on their second possession of the second half, it was with much less advantageous field position pinned in their own territory. Not only that, but it was also after having stood on the sidelines for nearly eight minutes of game time while the Volunteers ran 13 plays, but remarkably only picking up 30 yards after a sack and a false start penalty knocked them backwards from the edge of field goal range. 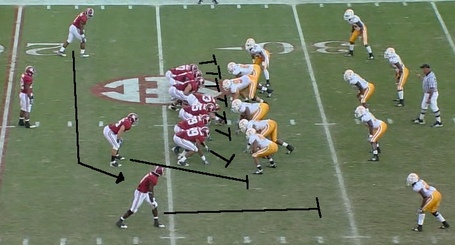 In an attempt to jump-start the Alabama offense, Ingram lines up in the Wildcat formation with Trent Richardson coming in motion from left to right across the formation for the first time in the game, with features two tight ends and an H-back on the strong side of the formation with Julio Jones as the only wide receiver, on the strong side with the H-back and a tight end. Unlike in the first half, when Tennessee inexplicably attempted to defend the formation with two deep safeties, Kiffin brings nine men into the box with no deep safeties. All 11 Volunteers on defense are within five yards of the line of scrimmage and the two deepest defenders are within several yards of the tackle box. 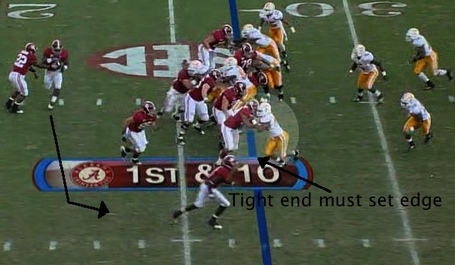 It's the Steeler play of Wildcat fame. Richardson takes the handoff from Ingram and heads toward the edge, which the tight end must set. 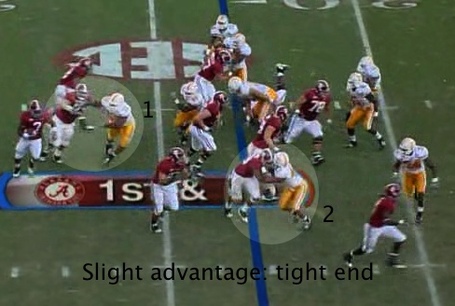 Initially, the tight end locks in on his assignment, but needs to be able to flip his hips and get outside the outside shoulder of the defender to seal him inside. 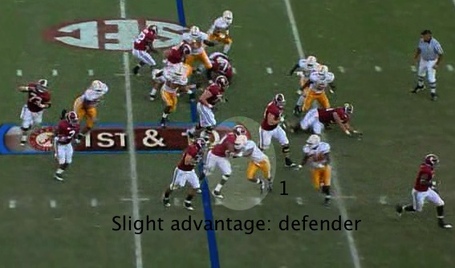 However, the defender starts to slide his inside shoulder past the outside shoulder of the blocker, beginning to gain a slight advantage. If the H-back can throw a block on the pursuing defender, Richardson can take the corner and pick up a nice gain. 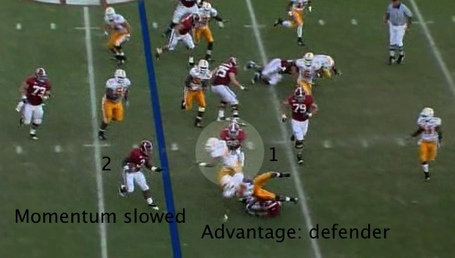 The defender works his whole body past the blocker, freeing himself to make a play on Richardson, who is forced to slow down and make a move to avoid the defender. 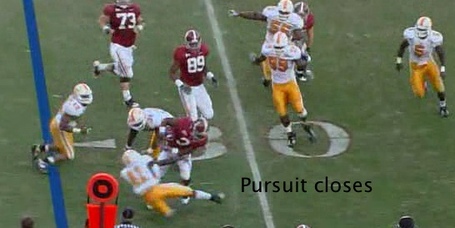 The edge defender does not make the tackle, but he does his job of forcing Richardson to not only slow his momentum, but also to cut back towards the pursuing defense, limiting the gain and allowing the other defenders to make the play. 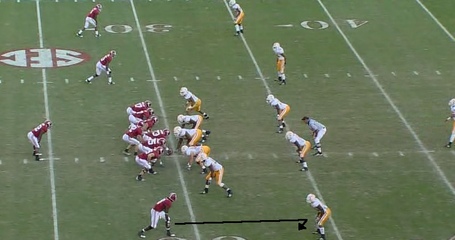 On second down, McElroy returns to the field, with two receivers split wide to the top of the screen and a tight end to the strong side and one receiver to the bottom of the screen, with Ingram five yards behind McElroy, who is under center. Tennessee outnumbers Alabama with seven in the box, three down linemen and another two defenders on the line of scrimmage. All three defensive backs are giving the Alabama receivers roughly five yards of cushion. 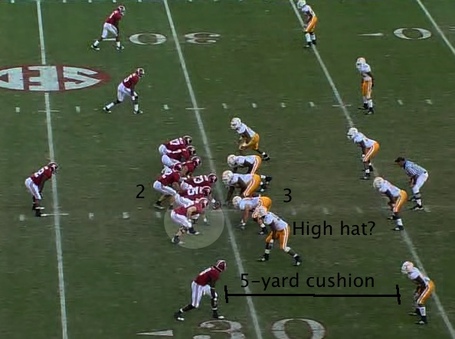 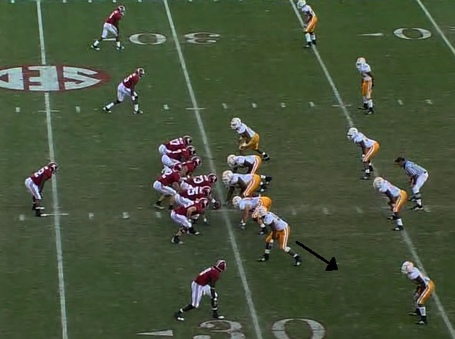 It's possible that this pass is a sight adjustment by McElroy and Jones checking out of a called running play, similar to the Texas scheme of using short hitches as an extension of the running game. It's also quite possible that Tennessee purposely gave Alabama this defensive look in hopes of getting McElroy to check into the hitch. Hence the defensive end bailing out in coverage and playing the flat. 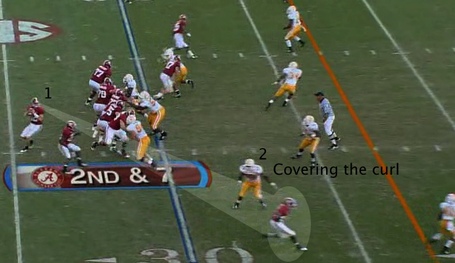 McElroy delivers the pass, putting it where only Jones can catch it along the sideline for a six-yard gain and manageable third down. 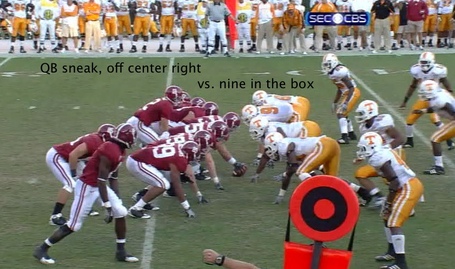 On third and short the Tide come out in a power-rushing formation, with Ingram in the game and two tight ends and an H-back and Julio Jones the only wide receiver. Because Alabama quick-snapped the ball, it's difficult to tell the Tennessee defensive alignment, but most of the defenders were within several yards of the line of scrimmage. 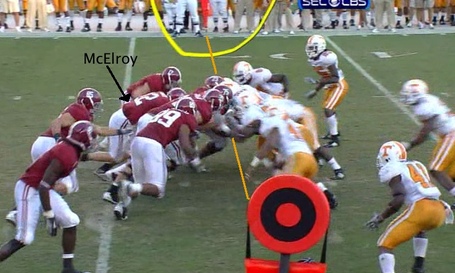 It's a quick-snap, quarterback sneak for Alabama with McElroy. After a brief initial surge behind the center, the Tennessee defensive line holds and a last defender comes into the play late to keep McElroy from picking up extra yardage spinning backwards off the pile. 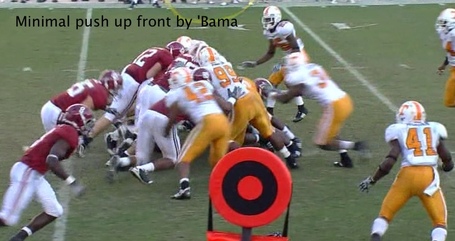 A Tennessee defender comes in late to make sure that McElroy does not pick up the first down on a second effort. 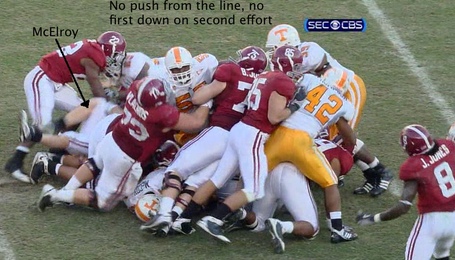 The officials mark the ball short of the first down, forcing an Alabama punt.

For the second straight drive, the Tide fail to pick up a first down, even after a completed pass on second down set up third and short, supposedly the bread and butter of the Alabama offense. Once again, the Tide fail to convert, this time as a result of the interior of the offensive line failing to get their pads lower than the Volunteer defenders, resulting in a lack of push.

After watching film on Alabama, as tough as their running backs are as runners, most of the offensive linemen for Alabama seem to be more comfortable blocking in space rather than moving the pile when drive blocking. That's not to say that they can't drive block effectively -- it's just that it's not their strength as a unit. McElroy, for his part, doesn't quite have the strength or size of a bigger quarterback to force his way forward far enough for the first down.

The first down play was mostly a result of good defense rather than a poor block by the tight end, but it is possible that Alabama didn't run Stealer much out of the Wildcat in this game because Richardson, while reasonably fast in his own right, doesn't have the pure speed of a Felix Jones or DJ Monroe, making it difficult for him to take the corner against a speedy Tennessee defense.

On second down, Alabama was able to complete the pass, but Tennessee had the perfect defense called. It's possible that the play was a sight adjustment between McElroy and Jones seeing the cornerback giving him the big cushion. If that's the case, then Monte Kiffin anticipated that adjustment and dropped the defensive end into coverage to take away the curl.

These two drives illustrate several important lessons -- 1.) the Alabama line is not invincible and Ingram capable of running through multiple defenders in position to make the stop, 2.) Monte Kiffin put a high priority on putting an extra defender into the box to stop the Alabama running game, and 3.) Alabama is not impossible to stop on third and short.

In terms of the offensive line, the interior linemen did not get a good push on the quarterback sneak -- it's possible that both guards are the weaker links of the offensive line, not hard to believe since that is where the weakest players normally end up on the line. Lamarr Houston and Ben Alexander should have some opportunities to get into the backfield and blow up some plays.

The second takeaway is that Kiffin was not particularly worried about Alabama burning him with the deep pass. As a result, Tennessee played almost the entire night with only one deep safety and the other safety up at or near the line of scrimmage to help play the run. It would be a major surprise if Will Muschamp does not follow the same formula, especially in primarily using three down linemen, with Sergio Kindle and a linebacker in two-point stances on either end of the line of scrimmage, much as Texas did against Nebraska. The question, then, is whether Christian Scott or Nolan Brewster will replace Blake Gideon in the lineup to help play the run, leaving Earl Thomas as the deep safety, or if Muschamp decides to make another adjustment, which could possibly include only one safety and three linebackers or simply staying with the base defense using Thomas as the run-support safety.

If Alabama truly is Goliath, these two drives at the start of the second half against Tennessee were an exceedingly poor impersonation. Even if they are, this David will be bringing an automatic weapon instead of a slingshot to the fight, defensively at least. Feel better Longhorn fans?