As mentioned here previously, in watching of the Alabama defense, there are basically no glaring weaknesses that jump off the screen. Stout run defense. Strong pass defense. Excellent in getting off the field on third down.

However, there are several areas of hope for the Longhorns to move the football and perhaps even break off some big plays, particularly in the passing game. 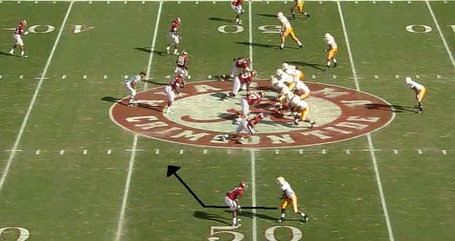 There isn't anything complex or exotic about this route -- it's a simple, man-beating slant. Notice that the cornerback here is #3, Kareem Jackson, up in press coverage against the Tennessee wide receiver, Denarius Moore. Jackson is not playing to take away either the outside or inside release -- he's pretty much head-up on him, just as a nose tackle is often head-up against a center. 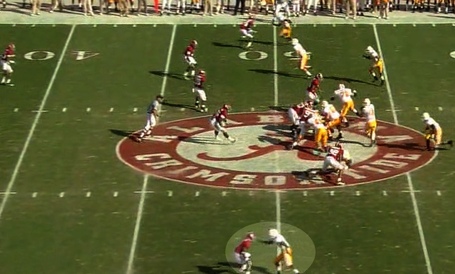 Look at how Jackson, for whatever reason, does not use his hands to slow down the progress of Moore, who uses his inside hand to make sure that Jackson does not get his hands on him. 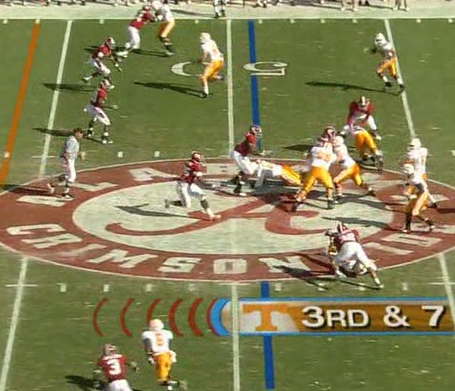 As a result of Jackson not getting his hands on Moore, the Tennessee receiver gets a clean inside release and picks up a step on Jackson in the process -- he's open and Johnathan Crompton need only deliver an accurate pass for a nice gain and rare third-and-long conversion against the Tide defense. 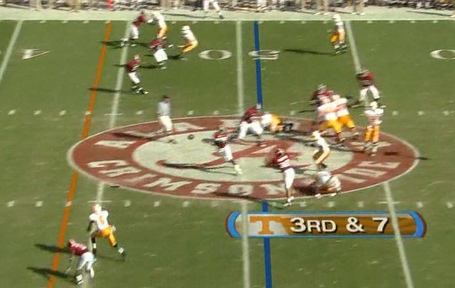 To compound the problems for the Alabama corner, he also slips on the play, allowing Moore to pick up another step.

Crompton delivers the pass in rhtym and on target and Moore picks up a big gain for the Tennessee offense.

One play does not a trend make, but what is heartening for Texas is that this exact same thing happened at least once more in this game with Jackson, who is not a bad cornerback per se, but does seem to have some problems in press coverage with not using his hands well to jam the receiver -- that may be part of the Alabama scheme or it may just be a weakness for Jackson, but things like this particular play seem to happen fairly often for such a good defense. This is an area to exploit and one of the few chinks in the Tide armor.

When the Longhorns run a slant, they like to use a common slant concept (remember, there's little "exotic" here), where two receivers on one side of the formation both run slants -- the double slant concept. It's an excellent way to beat man coverage and can often put the defense in a bind, as the safety on that side of the field can only help out in one place (assuming that there are less than five receivers on the field) -- one receiver should be open.

It helped the Longhorns score their only touchdown of the game against Oklahoma. However, Goodwin did also fail to step in front of a Brian Jackson late in the game on the exact same route -- the absolutely only thing the receiver cannot allow to happens, as the receiver must always break his route in front of the defensive back. Always. Only Colt McCoy's subsequent tackle saved the game and the season for Texas. 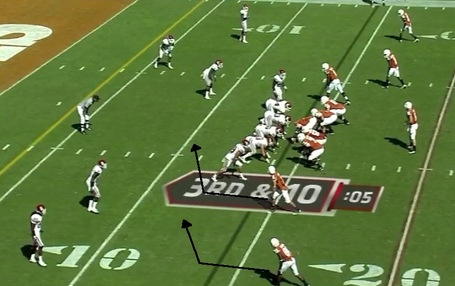 The Longhorns are in their empty set, with the receivers important for this analysis on the bottom of the screen -- Jordan Shipley inside and Marquise Goodwin outside. Notice that Goodwin has an advantageous match up against a safety -- Quinton Carter, known more for knocking out teammates in practice than being a great safety in coverage. As a result of being in the empty set, there are no deep safeties on the play. OU has six men along their front -- the linebacker on the right side of the line will come on a blitz, while the defensive end on that side will drop back into coverage in an attempt to take away the slant from Shipley. 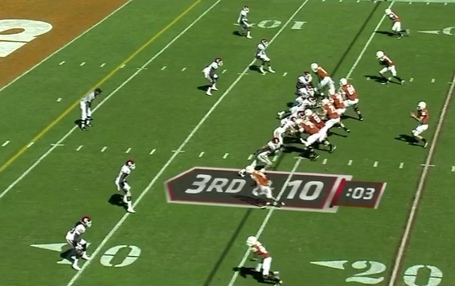 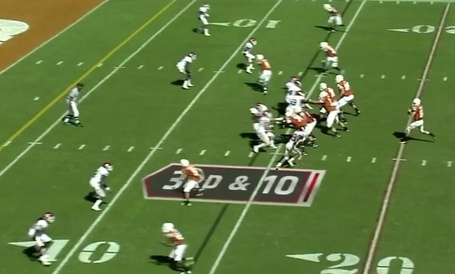 The defensive end drops back into coverage just as Shipley breaks inside -- he is not open on the play. Were the safety covering Goodwin on this play pattern matching, he would be aligned to notice that Shipley is breaking inside and perhaps recognize the route concept and jump it. Instead, he is not taking away the inside release. 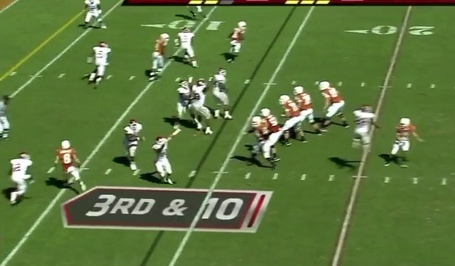 This is a remarkable picture -- as McCoy releases the ball with Travis Lewis levitated in his face, the entire Oklahoma defensive line has dropped back into coverage to try to take away the passing lanes.

Goodwin beats Carter by a step and catches the ball on the run. However, Carter is still in position to make the play and represents the only player who can keep the world class track star from his first collegiate touchdown.

Carter gets his hands on Goodwin and attempts to use his weight and momentum to drag him down from behind. Notice that Goodwin is relying solely on his right leg to keep himself upright, as the other is underneath Carter.

Here's the look from the original angle: 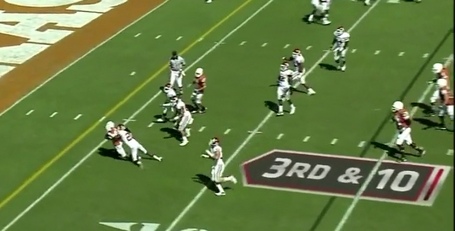 Goodwin uses Carter's momentum against him, making himself small and impressively shedding the OU defender.

It may not be a great idea to use much of the empty set against Alabama because they will almost surely blitz in those situations and attempt to force a quick and inaccurate pass while taking away the hot routes. However, the concept is sound from 10 or 11 personnel as well and could get the ball in the hands of a playmaker like Goodwin or Malcolm Williams.

There is, however, an even more dangerous way to get the ball to Goodwin on a slant concept, this time even helping him operate in more space and virtually guaranteeing a completion even if the defensive back takes the pass away, courtesy of LSU: 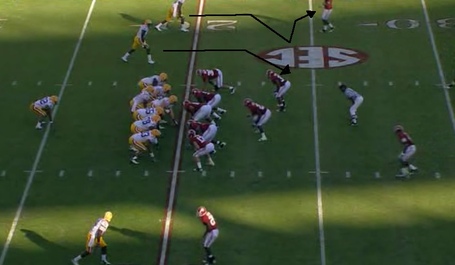 The flanker to the top of the screen is Terrance Tolliver -- apologies that he has no head, that's courtesy of the CBS producers -- running the outside of the double slant concept. Notice that the cornerback is our buddy Kareem Jackson, now off in coverage. 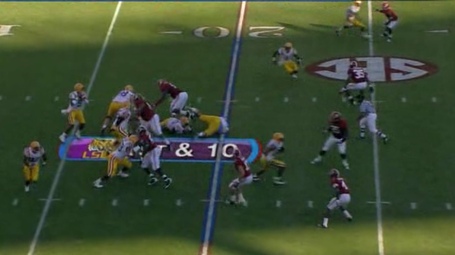 Jackson's position in coverage allows him to break on the pattern and he does -- breaking on the inside release. But the LSU quarterback Jordan Jefferson probably knows he's going to do that from his pre-snap read and he's ready for Jackson's break. 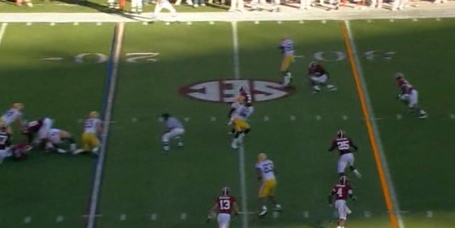 Instead of leading Tolliver right into Jackson and either a deflection, bit hit, or interception, Jefferson intentionally hits Tolliver on his back shoulder. Jackson's now caught inside and off balance, while Tolliver can spin and take the corner.

To top it off, Jackson slips once again as Tolliver accelerated. Notice as well that the safety on the play also bit inside on the double slant concept, leaving him out of position to deal with an accelerating receiver. 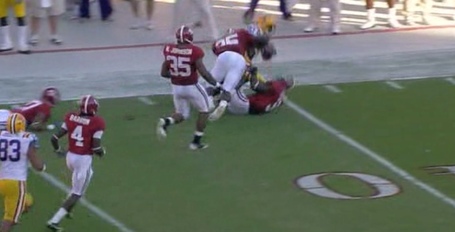 It's about 30 yards until the Alabama defense catches up with Tolliver.

Now, imagine Marquise Goodwin running that same route. I don't know how fast Tolliver is, but I know that the Tide defense wouldn't catch up with Goodwin after 30 yards. Or 40. Or any amount of yards that there could possibly be on the football. Yeah, the Tide defense is fast, but remember that Texas possesses the two fastest players in the game. And it's probably not even that close.