Alabama will be extremely well coached about Longhorn tendences on offense, just like Nebraska and Oklahoma. Alabama's defense will be much more like what Oklahoma did against Texas than Nebraska -- the Huskies are pretty base in what they do, while Saban's defense is the very definition of multiple.

Texas must break tendency against the Tide and use the defense's aggression against them using double moves in the passing. For that, the Longhorns must protect the quarterback well to allow time for throws downfield. If the offensive line can hold, a double move represents a chance for a game-breaking touchdown. 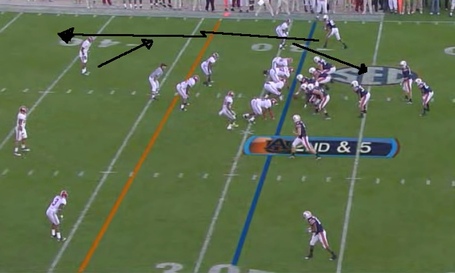 That's Darvin Adams at split end for Auburn at the top of the picture. Javier Arenas is going to come on a cornerback, leaving the deep free safety Mark Barron to rotate over in coverage. 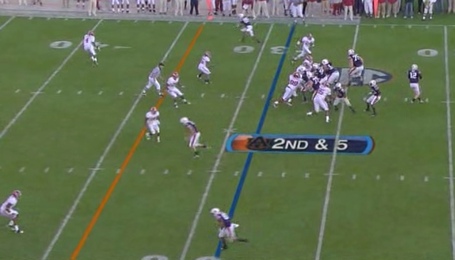 The Auburn offensive line does an excellent job of reading the blitz and shifting their protection responsibilities -- the right tackle only assignment know is to block Arenas on the edge. 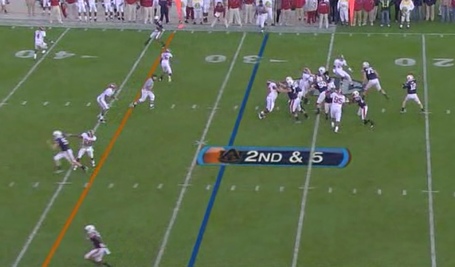 Arenas is forced to slow his momentum to work around the right tackle, eliminating any chance that he will be able to get to the quarterback before he releases the ball, even though it is a double move. Meanwhile, Auburn quarterback Chris Todd will give a pump fake for the benefit of the rotating Barron, just as Adams fakes the hitch or comeback route. 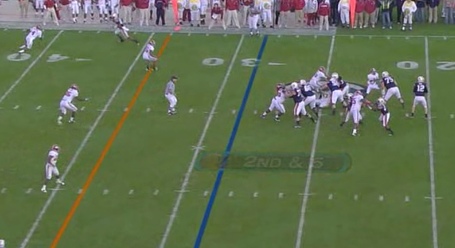 The linebacker responsible for that route gets out there in coverage enough to take away the hitch -- Barron loses his responsibility as the deepest man on the field even though his teammate has the route covered.

It's a major mental meltdown for the Alabama safety and the consequences are immediately apparent. Tood delivers the pass on time and on target and Adams has nothing but grass in front of him for 50 yards. 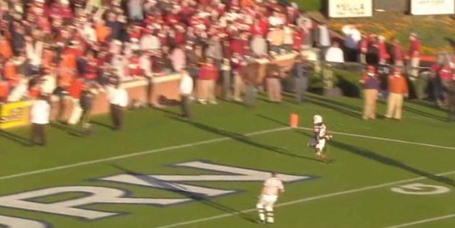 Do It, Work It, Score

This is how you change games. Max protection. Watch for a blitz from Arenas or overplays. Hit the game-changing play.