While the rest of my colleagues left our office early on Friday to drive to San Antonio for the annual firm retreat, I left for the Austin airport to fly to Nebraska.

The Lincoln airport being a three-gate non-entity, like most everyone else going to the game I flew in to Omaha, an hour's drive away. A dozen of our friends had rented a party bus to shuttle them from Omaha to Lincoln, but they weren't going until Saturday morning. My friend Jimmer and I wanted the full Lincoln experience, including the Friday night pre-game festivities. Already in Omaha for business, Jimmer was to pick me up from the airport in his rental car and off we'd go...

Friday night at the bars in Lincoln. Saturday tailgate and game. Saturday night party bus back to Omaha with the rest of our friends.

There is something particularly gratifying about flying to a true road game. You feel it when you book your trip, when everyone asks you throughout game week about your plans, and especially when you board the plane and encounter that smattering of other fans who also care enough about Texas football to fly some city you'd otherwise never see.

As I settle into my seat on a United flight to Denver, that feeling is especially acute. Texas has lost two in a row, the fan base is demoralized, and Nebraska has looked near-unstoppable, especially in a curb-stomping of Kansas State. Only the truly dedicated are going to this game. Or the truly stupid.

"Headed to the game?" I ask the man in the burnt orange pullover sitting across the aisle.

I nod. "Figure it's my last chance to see us in Lincoln."

A man a row behind us explains that all but one of the five friends in his group had bailed and sold their tickets, figuring Texas was headed for a beating. With Huskers fans paying $500 just to get in the gate, I suspect they aren't the only ones.

After flying a 737 from Austin to Denver, I'm surprised to find my connecting flight from Denver to Omaha is the larger 757. It's a full flight, and eighty percent of the passengers are wearing Huskers gear of some sort, including the gentleman seated next to me -- a doctor in his 50s wearing a white polo with a red N emblazened on the front. We share a pleasant conversation across the 80-minute flight, during which he gives me some helpful game-day pointers, wishes me a good trip, and expresses his doubt that Nebraska will be able to blow out Texas, as so many seem to think.

This proves to be a running theme of the trip: the older fans are unfailingly polite, generous, and modest. They aren't shy about expressing their desire to win, and clearly think that Nebraska will do just that, but they make a point of not making it personal, and insist that the game will be competitive.

In Omaha, Jimmer picks me up from the airport and sets out towards Lincoln, an hour to the west. He's been spending two to three weeks out of each month in Nebraska for business, and I ask him for the rundown on the state. There are about 1.7 million people in the entire state of Nebraska, and Omaha -- pushing a million residents -- is by far the largest city. The state has been steadily losing population for decades as young people no longer grow up and stay on their family farms but move away looking for work in growing cities.

Upon arriving in Lincoln, we quickly check in to our hotel, call for a cab, and head for the city center. This is not as routine as it sounds, thanks to Lincoln's utterly insane laws related to taxis which make it illegal for cabbies to pick up hailing passengers.

"How about you give us your cell phone number?" I ask our driver after he finishes explaining why it took so long for him to arrive.

"What is this, Russia?" Jimmer quips.

"Everything has to go through dispatch," the cab driver apologizes.

As we pull in to downtown and see thousands of people milling about from bar to bar, it's clear this is going to be a problem.

I look over the passenger seat for the driver's permit tag and find his name. "Russell, my friend. Do you suppose a substantial tip might make you forget to check in with dispatch at around, say, 2 a.m.?"

"I suppose it might," he quickly agrees. I offer two twenties and Russell hands me a card with his number on it.

Having found the Haymarket district near-empty, the cab had dropped us on O Street, where all the students party on weekends. Without any idea where to start, we stop a tall brunette and ask her for a recommendation. It turns out she's on the volleyball team and she gives us the rundown of the bars, suggesting we check Duffy's first.  We thank her for the tip.  Prematurely, it turns out.

We cross the street and join the line out the door, then immediately get out of line when we're close enough to sneak a peek inside. It looks like a scene from Jersey Shore: Farmville. (Which is why I laughed uncontrollably on Monday morning when I saw Shaggy Bevo's THujone posted this Not Safe For Work illustration of his own visit to Lincoln.)

We cross the street again to try a bar called Sandy's and find better results -- a straightforward college bar with normal-ish looking fans. I order four bourbon and sevens for us and we begin to wander around the bar, examining the patrons with curious amusement. Seemingly every group has a large tea pitcher filled to the brim with orange juice and drinking straws.

"What's in the pitcher?" Jimmer finally asks someone.

"Orange juice and six different kinds of liquor!" a peppy co-ed exclaims. "You have to get one."

"Smells like roofies to me," I say, holding my hands up to say no. I tell Jimmer about my trip to the 2007 Holiday Bowl with 54b, the first and last time we accepted open drinks from fans wearing different colors.

Instead we drift over to a pocket of fans in burnt orange and introduce ourselves, and wind up having a grand old time with their group, accepting their invitation to tailgate on Saturday.

Then, just as we're about to leave Sandy's, it happens. A group of Nebraska students challenges one of their own to down an entire pitcher of the alcohol-saturated orange juice.

And he accepts. One, two, three, four chugs and he's barely made a dent in it, but he just keeps chugging -- eight, nine, ten... It takes him a full twenty seconds of chugging to knock it all down, every second of which our jaws are on the floor. 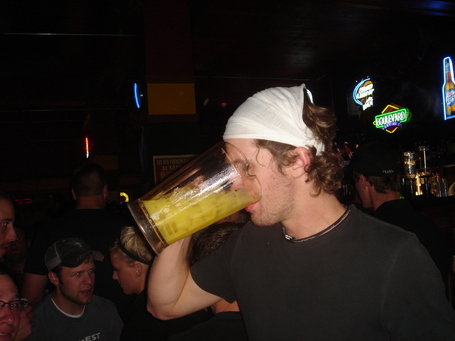 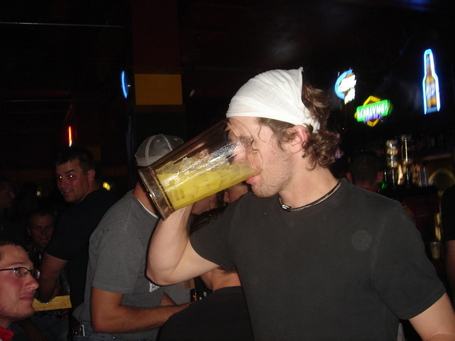 Thanks to David F. for the photos.

"I assume his friends already called an ambulance?" Jimmer asks, only half kidding.

"I'm never having kids," is all I can manage to say.

We bar hop until the bars close at 2:00 and are grateful to have Russell's number, as hundreds of students stand on corners on cell phones, trying to book cabs.

Back at the hotel, we exhaustedly flop into our beds.

"We gonna win tomorrow?" Jimmer murmurs before passing out.

"Yes," I reply, turning out the lights. "We're playing Nebraska."