The debut of the top 10 players in the state for 2012. As the process moves along, the list will be expanded to 25.

1. Mario Edwards, Denton Ryan DE: He's 6-5, 250 pounds and made big plays as a receiver last season as a sophomore. And he does backflips. And he's a vicious tackler.

2. Johnathan Gray, Aledo RB: The swarming Lake Travis defense and poor field conditions at Cavalier Stadium mostly kept Gray in check in early September. When the game was on the line, though, it was Gray picking up tough yardage when everyone in the stadium knew he was going to get the football and showing off his balance and straight-up will to win on a late third-down catch and run. Capable of carrying the football 20 or more times a game, Gray has a fantastic combination of toughness, vision, and the speed to take it the distance.

3. Malcolm Brown, Brenham DT: Easily the best defensive tackle in the state, Brown has both a high motor and violence with his hands that make him able to impact plays up and down the line of scrimmage. Further thoughts here.

4. Cayleb Jones, Austin High WR: As time moves along, concerns seem to be growing about the ability of Jones to make plays after the catch and the fact that he doesn't have great speed. In a lot of respects, though, those concerns probably result from Jones appearing so early on the radar that there has been plenty of time to start nitpicking his skills set. Evaluations here and here. And then there is this, of course: 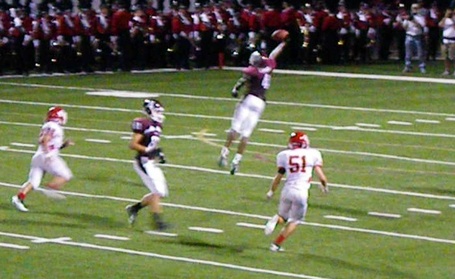 5. Derek David, Rockdale LB: From a talent perspective, David is as good as any linebacker to come out of the state in recent years. Concerns about his ability to qualify may keep the soft Texas Tech commit from being pursued seriously by Texas, even though Will Muschamp reportedly is highly infatuated with the rangy, hard-hitting prospect.

6. Curtis Riser, DeSoto OT: A mauler with a nasty attitude who gets a ton of reps in pass protection and also has experience run blocking from a two-point stance, Riser is by far the best offensive lineman in the state. Considered by many to have more upside than either Marcus Hutchins Evan Washington, two other DeSoto alums who were highly rated in their own rights.

7. Bralon Addison, Missouri City Hightower ATH: There may be questions about whether the high school quarterback will end up on the offensive or defensive side of the ball in college, but there are no questions about his supreme talent and athleticism.

8. Javonte Magee, SA Sam Houston DE/DT: A massive kid at 6-7, 273 pounds, Magee's stock is rising and it's no wonder considering that he possesses a combination of size and athleticism that is matched on the defensive side of the ball only by Mario Edwards in the class. Here's the recent scouting report from Jeff Howe.

9. Thomas Johnson, Dallas Skyline WR: A high ankle sprain has kept Johnson off the field for much of this season, a disappointment because Johnson is transitioning from playing quarterback at the TAPPS level to playing receiver in big-time Texas 5A football. Admitted he had some problems with his hands trying to make the move to receiver. Further thoughts here.

10. LaDarrell McNeil, A. Maceo Smith S: A flat-out striker and excellent athlete, McNeil is probably a safety all the way in college. On film ($), his instincts look excellent and he shows an ability to play the football in the air, come up in run support, and make pass catchers pay for going over the middle. Kid is an enforcer.