We're going to move a little bit quicker through day two here, both because I'm behind in a busy week and I want to spend some time talking about the game play itself.

Jimmer and I headed to the stadium at about 11 a.m. and began the long walk to the baseball stadium, adjacent to which was our tailgate. Like at UT, the tailgating scene at Nebraska spreads out like vines from the stadium, filling every available parking lot, underpass, and any other open area that can host a tent or vehicle. The overall atmosphere was festive, energetic, and generally impressive.

Not impressive? The fans under 30 years old, a substantial number of whom were wearing anti-Texas garb. Now, I get the urgency Huskers fans felt for a win in this game, but it is absolutely inconceivable that any Texas crowd could be as anti-opponent as they were pro-good guys. And yet there we were, surrounded by every imaginable anti-Texas shirt imaginable.

"Screw Texas and the Steer They Rode In On!"

And worst of all, red shirts with the Longhorns logo... upside down.

Congratulations, Nebraska. All you're missing is the "Saw 'Em Off" shirt and male cheerleaders. 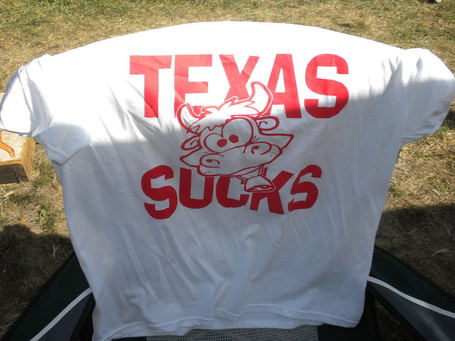 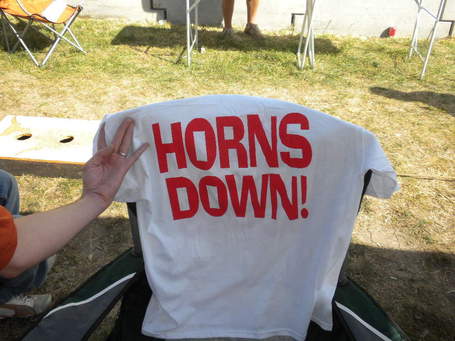 You forgot the W, noob!

We finally made our way to the tailgate of the friends we'd made the night before and began pre-gaming, finding them in the middle of an intense game of flip cup. 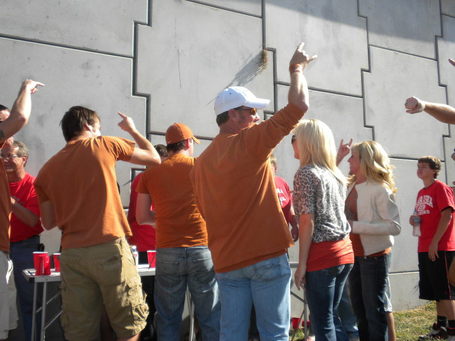 Other pictures from the tailgate: 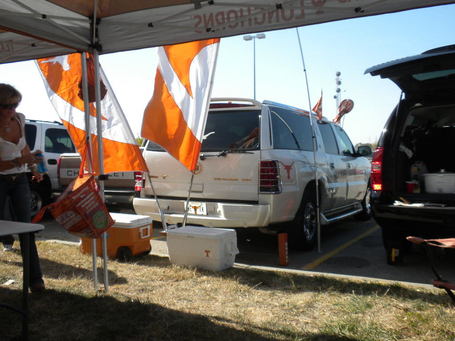 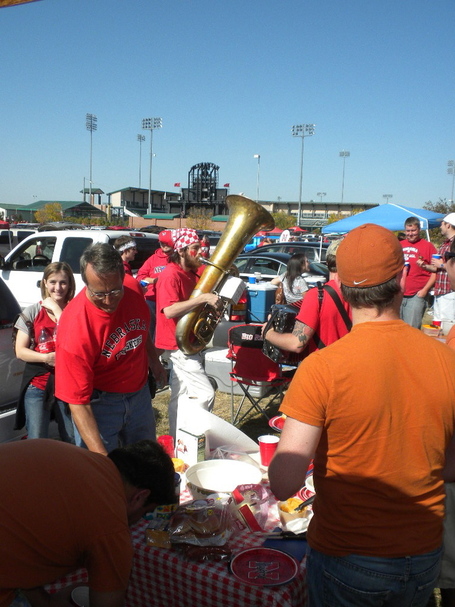 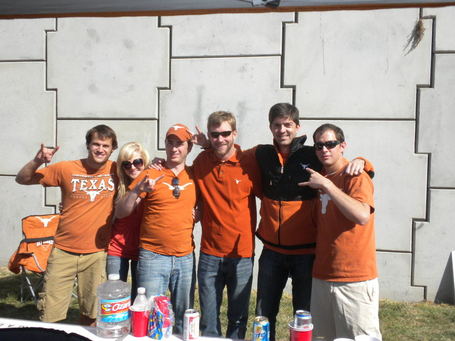 About 40 minutes 'til kick off, we thanked our comrades for the hospitality and headed for the stadium. 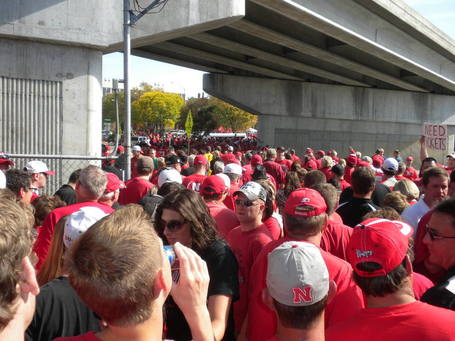 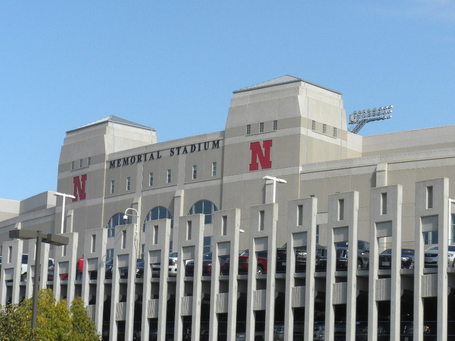 Finally, about 20 minutes before kick off, we made our way up the elevator and into Section 127, where we would be sitting. We'd originally planned to sit in the Texas section, but were able to give those two tickets to Texas fans at our tailgate in need because the morning of the game Jimmer had gotten a call from his company's local counsel, who wanted to thank him for his business with a pair of tickets to the game.

And not just any two tickets to the game. Club level seats. 50 freaking yard line. 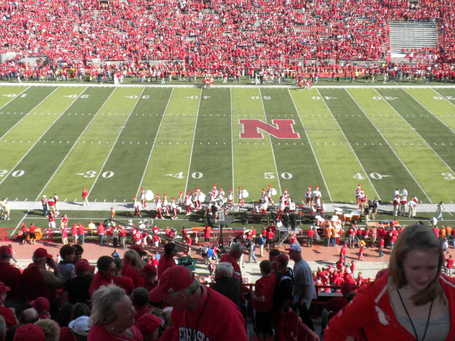 The view from our seats.

We were literally the only two Texas fans for four sections. Totally alone, in a sea of red, in seats Nebraska fans dream of. Though we'd also been invited to the Governor's Tailgate at the governor's mansion and had the good courtesy not to show up to that decked out in burnt orange, we weren't going to pass on these seats, and prepared ourselves for the gasps of horror as we 'excuse me'd our way down the row past horrified Huskers fans.

"How on Earth did you get these seats?" the man next to me stammered.

I seriously contemplated telling him that Paris Hilton owed me a favor, just to send him over the edge, but politely explained that a business colleague had been a late scratch and passed them along as a favor.

As you'd expect in such nice seats, the fans around us were mostly older and, as was a theme, very well-mannered and polite. We were treated well, and everyone around us was wearing Nebraska gear - as opposed to anti-Texas.

The pre-game hoopla was impressive and the crowd was as loud as any I've heard. The roar when Nebraska charged out the tunnel was deafening, the energy in the stadium electrifying. On that count, Nebraska fans deserve lots of credit, but they were in other ways a disappointing crowd that did not live up to its reputation.

For starters, the Nebraska fans were absolutely obsessed with the officials, and though the anti-Texas anxiety didn't manifest itself in clothing amongst the fans in our section, it most certainly did with the way they cheered in the game. Every single call or non-call, questionable or not, was booed with bizarre intensity. I'm not some kind of zealot when it comes to these kinds of things, but when you boo every single call like you got hosed, it belies a hidden insecurity.

It quickly became bizarre, being amidst this swirling morass of angst. Nebraska fans literally could not bear the thought of being outplayed, of losing. And they lashed out. First, at the officials. And then, at an injured Texas player, and that's when I lost it.

It was sometime early in the fourth, when Texas was already playing Phillips and Hicks, and racking up terrifying injuries to key players left and right. And then Jackson Jeffcoat goes down, and while Jimmer and I are looking on in horror, praying he's okay, the Nebraska fans start booing like madmen.

"Why is everyone booing?!" I holler at the man next to me. I'm wondering what I missed - another wave of anger at the officials? Nebraska had just picked up a first down, so I couldn't imagine what was wrong.

"They're faking injuries to kill our momentum!" he yelled back angrily.

I laughed, and then just turned to Jimmer and said, "Screw these guys. I'm looking forward to singing the Eyes of Texas on this damn field."

Probably most pathetic of all, though, was the final five minutes of the game, when Nebraska fans headed for the exits early. That's right, a good 10,000 fans missed the punt return for a touchdown, bailing on the team in a two-score game.

Texas held on, we sang the Eyes, and Jimmer and I left Memorial Stadium amidst an overrated fan base. They'd sold out - sold out for this game, for a win, and embarrassed themselves. Walking back to our bus, the old fans remained polite, but the younger ones put an exclamation point on it.

"Sorry," I snickered. "It'll cost you that Redemption t-shirt off your back."

Something tells me we won't be invited back any time soon. I'm glad I went.