Did you know punting is sexy?

What happened to the hated rugby punt?

It's still here. It's just not so hated anymore.

In fact, the old rugby right punt just got sexy, thanks to Texas' Justin Tucker.

The two most overlooked plays in the win at Nebraska had to be plays that didn't even involve the offense. The Longhorns added a wrinkle to Tucker's rugby punt by having him roll to his right as usual, only this time he kicked the ball back to his left, diagonally across the field, as opposed to the regular rugby punt, which is straighter.

It will be a homecoming for several Iowa State players.

Wherever he went around town, he saw burnt orange and saw the hook-em horns hand sign.

"Honest," he said. "I’ve never been to games there. Saturday will be a first for me and my family."

They keep things simple in Iowa.

It has been two very tough weeks for the Cyclones.

After losing the last two games by a combined 93 points, Cyclone football coach Paul Rhoads believes it’s just as important for his staff to ensure his team doesn’t dwell on the recent losses as it is for ISU (3-4, 1-2 Big 12 Conference) to prepare for No. 22 Texas (4-2, 2-1) on Saturday (11 a.m., Fox College Sports).

"You can see it in their eyes," Rhoads said. "You can see it in their actions. They came to work like they always do, but when you keep coming to work and you are met with a 52-0 defeat (to No. 3 Oklahoma last Saturday), sometimes you start scratching your head and asking questions, and that’s our job as coaches to not get to that point."

Mack Brown supports changes that would make the game safer for players.

Brown also said he would bring back the controversial ‘halo rule.’

That rule said that defenders had to give a player receiving a punt a 2-yard cushion while that player attempts to catch the punt.

UT and OU are pretty savvy at saving money when firing coaches.

Of the nine contracts available for this column, six were written with language more favorable to the university than Gill’s. Not surprisingly, the University of Texas and Oklahoma University stand to save the most via buyouts should they ever elect to dump football coaches Mack Brown or Bob Stoops before the end of their contracts. In addition, Oklahoma State would save 25 percent of its contract with coach Mike Gundy should OSU can Gundy without cause and Iowa State would save nearly 50 percent if the Cyclones hand Paul Rhoads his walking papers.

Columbia will be the center of the college football universe on Saturday. Missouri is excited about playing the Land Thieves.

"We're excited about playing Oklahoma, a very good Oklahoma football team. They're always good. Bob Stoops does a great job there, I have great respect for Bob. We're excited about playing in "The Zou" here in Columbia. It's a great opportunity for us. Other than that we're just going to work hard to try and improve and get better this week and play our best football game."

Missouri has lost seven straight and 19 of the last 20 in this series and hasn't beaten Oklahoma since 1998. Overall, the Sooners hold a 66-23-5 advantage in the series, including a 31-15 edge in games played in Columbia.

My intuition is that offensive efficiency is not as valuable as defensive percentage. I’m not sure why. Maybe it’s because a one-sided game — Texas Tech 52-17 over a truly awful New Mexico team; OSU’s 65-17 beatdown of hapless Washington State — can skew the numbers more than defensive dominance. You dominant a team offensively, and the sky’s the limit. Dominate a team defensively, and a shutout is as good as it gets. Absolute zero.

So what's the story behind Taylor Martinez's benching?

"He forced some decisions," Watson said. "That led to some of his problems and our problems. Being eager in a big setting to make a big play and those are things we've got to grow through."

And while Martinez, "comprehended" NU's halftime adjustments, bad field position – and Martinez's inability to execute an alternate plan – played a role in his removal.

I'd keep that to myself, if I was you.

"It's no different, I called just about every play in the games a year ago," Sherman said. "I didn't my first year [in 2008]. I wanted to get settled in as a head coach. But last year, I called every play."

Sherman added that if anyone is to blame for the unit's problems, it is the play caller himself.

"Anything you want to blame, blame it on me, because I call the game," Sherman said.

This game should be fun to watch.

Texas A&M and the Kansas Jayhawks are struggling because they've made too many mistakes against opponents that have done little wrong this season.

The Aggies, smitten by nine turnovers in back-to-back losses to Oklahoma State and Arkansas, didn't commit one last week against Missouri. It was of little solace as A&M allowed a season-high seven sacks and committed eight penalties in a 30-9 loss.

The Cornhuskers are finally relevant again! And now they are leaving.

Now that you're turning back into something resembling the Cornhuskers. Now that you seem capable of sharing the heavy lifting that Oklahoma and Texas have been doing for a decade. 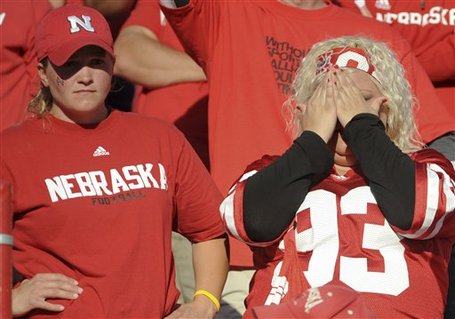 For all of our Cornshucker visitors...Now do you feel better?

Reviewing the tape of Mack Brown’s post game at Nebraska, he likes the Cornhuskers to emerge from the North Division.

"Whoever wins the South will most likely see them again (in the championship game) because they’re really good," Brown said.

BDR doesn't endorse any of the rubbish that is out there, we just link to it. If you happen to find something on the interwebs that might be of interest, please send the link to dimecoverage@gmail.com.