Samsung has been kind enough to sponsor a series of posts across the network over the next three weeks, focusing on the intersection of sports and technology. Now, I'd love to be able to sit here and tell you how much I love my Samsung HDTV, but unfortunately I'm still living in the late '90s with my 24-inch, decidedly non-HD TV. It's a piece of junk (probably because it's not a Samsung! Like what I did there? Eh? Eh?).

What I can tell you is that if I had the money, there's no question every Saturday would find me glued to one of the new Samsung Smart TVs that feature web-connected aps and the ability to stream shows and movies, as well as connect with social networking sites like Facebook and Twitter. What better way to appreciate the game than that? Maybe one of the 3D models. Point is, I'd never leave my couch!

Moving on from GoBR's fantasyland (brought to you in stunning high definition!), the intersection of sports and technology now allows the average fan to break down plays in much greater detail than ever before. High-speed internet allows users to download games onto their slick Samsung laptops, pull screenshots from the game, then add illustrations to provide breakdowns on a level normally reserved for the profesionals.

The only forced turnover of the game by the Texas defense early in the fourth quarter didn't allow the group much time to rest or recuperate -- on the following play, right tackle Britt Mitchell barely got out of his stance quickly enough to get his hands on Superstar For A Day (just add Britt Mitchell!) Jake Lattimer, who forced a fumble recovered by the Cyclones.

Back on the field with the sudden change, the Texas defense did not respond well. At the point of attack, Kheeston Randall was unable to force double teams and Iowa State smartly ran several different zone read looks to guarantee two offensive linemen heading to the second level to take on the two Texas linebackers, Keenan Robinson and Dustin Earnest. Forcedd to beat blocks one-on-one the 'Horns defense was unable to do so.

On the first three plays of the drive, Cyclone running back Alexander Robinson picked up six, seven, and seven yards, gashing the Longhorns and threatening to take a three-score lead against the home team. Iowa State faced a 2nd and 3 from the Texas 20 yardline.

Desperate to find something to slow down the Iowa State attack, Will Muschamp decided to change his strategy in an attempt to keep his best linebacker free of blockers. 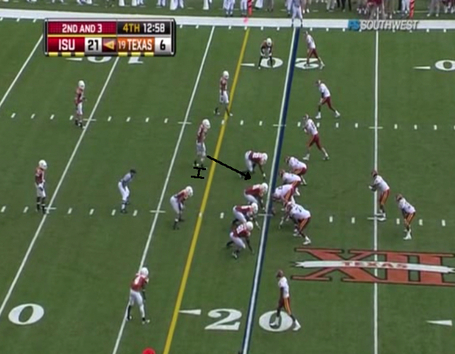 Cosmetically, the only thing that looks different from the previous plays before the snap is the positioning of strongside linebacker Dustin Earnest, who is lined up outside the box instead of over the uncovered Iowa State right guard. Robinson and the defensive line are all in their normal positions, with both defensive ends on the outside shoulder of the tackles, a three technique defensive tackle (Alex Okafor), and Kheeston Randall lined up over the center at the nose tackle.

Texas should be in good shape on this play -- with Earnest run blitzing into the right guard, the defensive line will be 5-on-5 at the point of attack, with the team's best linebacker in Robinson free to clean up the play if it makes it through the line.

Iowa State lines up in their base 10 personnel package (though the inside receiver on the strongside is basically a tight end) with trips right and Alexander Robinson lined up on Austen Arnaud's left side in the shotgun. 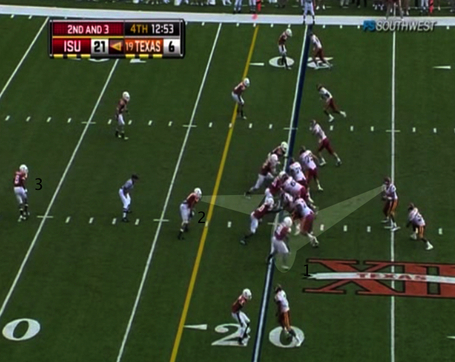 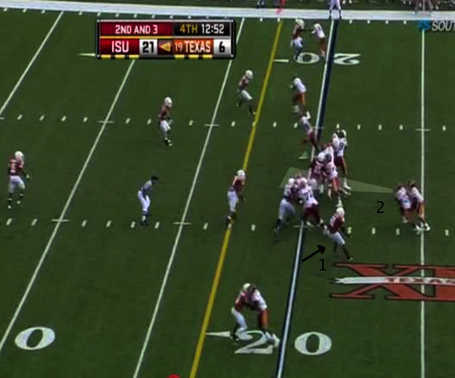 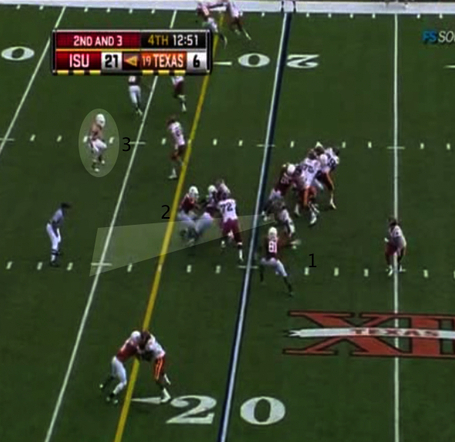 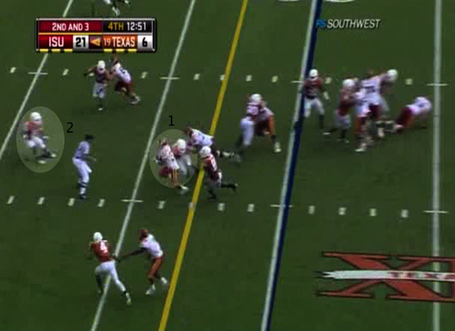 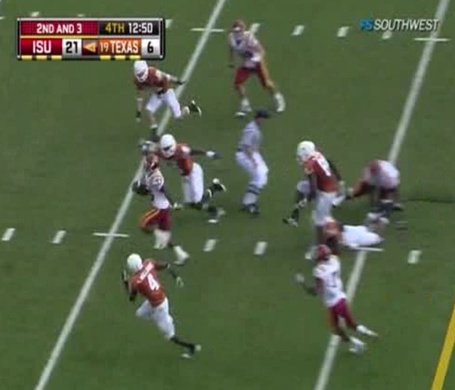 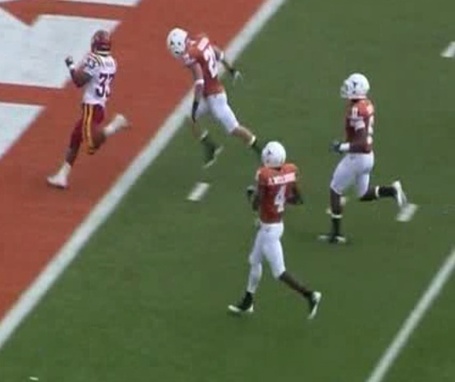 It's hard to blame Muschamp for the playcall here -- after all, the Longhorns weren't able to stop Iowa State in their base defense, leaving him little choice. The problem is that the option game gave the Cyclones the ability to become 5-on-5 in the box and Texas was not able to win any of the individual battles and get off their blocks. Ultimately, that falls on the players.

By the end of the game, it was clear that Randall and Okafor were both tired, as neither had much impact on the game. In addition, Dustin Earnest is miscast as a 4-2 linebacker, much better suited instead for playing in the middle of a 4-3. The loss of Emmanuel Acho and lack of overall depth at the position clearly had a a major impact on the 'Horns' ability to stop the Iowa State running game. Jordan Hicks didn't play in the game, which was extremely costly, as he has only been trained to back up Keenan Robinson.

The play also highlights the spotty contributions by the safeties this season, particularly Christian Scott, who has made no positive impact in the passing game and showed off his athletic and mental deficiencies by recognizing the play slowly, taking a poor angle, and then not having the lateral quickness or explosiveness to give himself a chance to make the tackle.

In a lot of ways, this play sums up the Texas football season so far -- the players are mostly where they need to be, mostly doing what they need to be doing, but slight mistakes by several players adds up to a back-breaking touchdown. Frustrating.