It can't possibly get any worse, right? Have we hit the bottom?

No, the really gnawing part is that the ultimate humiliation didn't come as a random strike out of the blue. It was more like being submerged in quicksand. The Longhorns had already ceded their claim on the Big 12 South to Oklahoma, their home field to UCLA and their poll position to Iowa State. Brown spent the last week calling out everyone who'd ever worn burnt orange, coaches through water boys. This was a desperate team, not a distracted one. Texas wanted and needed to beat Baylor. It just wasn't good enough.

A bold prediction about Greg Davis?

I'm on record as saying that I think Greg Davis will look to step down as offensive coordinator of the Longhorns. Will it be voluntary or will he be pushed out the door? I don't suppose it matters one way or another. We can debate how much culpability Greg Davis has in this disaster of a season for the Longhorns offense, but the perception around most Horns is that Davis is THE PROBLEM and that perception could be enough to hasten the move for a new offensive coordinator.

Watch any of this, if you dare.

As far as we're concerned, there is no best.

The official game notes at Texassports.com say that this was the 62nd consecutive sellout at DKR Texas Memorial Stadium.  Isn’t that great.  Seriously, it’s a wonderful thing, and entirely due to the success Mack Brown has brought to the University of Texas football program.  This is an important thing to remember as you read through the rest of this week’s GBU.

The official game notes also made sure to note that this was the 2nd straight game (2 in a row!) that the Texas offense managed to total more than 400 yards of offense, and that the offense piled up 25 first downs to a mere 17 for Baylor, bringing our two game margin to a princely 50-33 over the leviathans from Aimes, Iowa and the Wacoan metropolis to the North.  You will no doubt hear Mack using those two tidbits over and over again this week in his ongoing efforts to justify keeping his OC employed.

It works perfectly on the whiteboard...

The Pokes have found redemption.

The defense set the tone on a day that OSU's offense, for the first time all season, simply could not get going.

"Obviously, our defense ... I could go on and on about them," said Gundy.

The Cowboys forced three turnovers and Johnny Thomas returned an interception for a touchdown late in the fourth quarter to nail down a 24-14 victory on Saturday at Bill Snyder Family Stadium.

ESPN's West Coast broadcast team, including former Oregon coach Mike Bellotti and former Washington quarterback Brock Huard, nearly ran out of adjectives in describing OU quarterback Landry Jones' performance against Colorado.
After showing a montage of Jones' four touchdown passes, Huard said, "If you want to talk about accuracy, all four of those receivers didn't have to flinch."

No one wants the Buffs.

Romanticism for the OU-Nebraska series — Big Eight-era meetings often decided who would be playing for national championship stakes — is so high that it may be revived as a miniseries. Athletic directors Joe Castiglione and Tom Osborne indicated they are considering a home-and-home series in 2020-21.

Castiglione said the Sooners appreciate their history with Colorado, but he isn’t aware of any outcry to maintain a series with the Buffs.

What's ahead for the Land Thieves?

"Have you ever heard me gush like this before?" said Stoops, who is in his 12th season at OU.

Stoops has indeed raved about several newcomers. But the infusion of quality young talent also has created a dilemma on this season's team and that could grow in the near future.

Iowa State beat Kansas 28-16. The Cyclones are one win away from going bowling.

This isn't to say Texas didn't, but Baylor lined up and straight-up beat the Longhorns -- in Austin. Most surprising: No one was really surprised. The Bears didn't play fantastic, but they played well, and that's all they needed to beat Texas. The Longhorns have been average at best this season at home, but they have as much talent on defense as almost anyone in the country and they needed this game badly to salvage their season. Instead, they were firmly denied, setting up a suddenly huge game for Baylor next weekend. Was there a soul on the planet who thought Oklahoma State-Baylor in the first week of November would be between a pair of ranked teams? Shows what we media members, who picked the Cowboys and Bears to finish fifth and sixth in the league, know. We live in a strange age of Big 12 football, folks.

Nebraska's sophomore linebacker Eric Martin was suspended for one game for a hit on an OSU player. NewsOK's Berry Tramel wonders if the problem has trickled down from the NFL.

Martin popped Oklahoma State’s Andrew Hudson with a blindside block last Saturday that virtually knocked out Hudson and almost certainly caused a concussion. The play resulted in no penalty, but Big 12 commissioner Dan Beebe deemed it a helmet-to-helmet hit.

Shatel correctly points out that the most controversial thing about Martin’s hit was his reaction. He stood and posed over the fallen Hudson, then while Hudson was wheeled off the field, Martin was shown laughing on the sidelines. Bad, bad form. 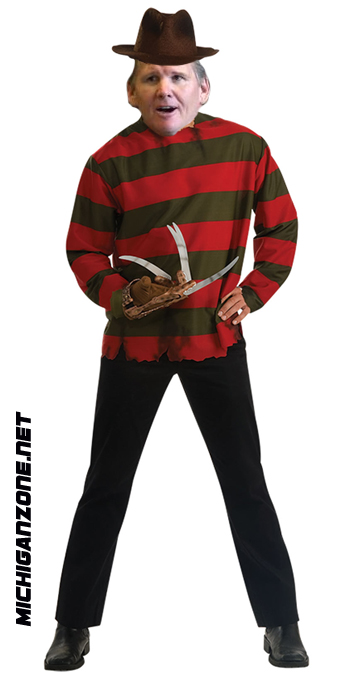 Take a look at the BCS top 10 and you won’t see a lot of true blue-blood programs (Alabama and Oklahoma) but rather a string of either traditionally solid, but rarely great major conference programs or flying-high upstarts from outside the game’s power circles.

Auburn, Oregon, Boise State, Texas Christian, Michigan State, Missouri, Utah and Wisconsin are all part of a new money rush toward the top.

For some schools it safer to stay home.

This Texas high school football game must have set some sort of record.

The Nacogdoches Dragons and Jacksonville Indians started Friday’s District 14-4A game playing for a playoff berth.

As it turned out, they played long into the night and set what is thought to be a national record for overtimes.

Jacksonville’s Rodrigo Carreon hit a 19-yard field goal in the bottom of the 12th overtime to give the Indians an 84-81 victory over the Dragons Friday night on Dragon Stadium.

BDR doesn't endorse any of the rubbish that is out there, we just link to it. If you happen to find something on the interwebs that might be of interest, please send the link to dimecoverage@gmail.com.