Truthfully, the most recent team that this year's Longhorns compare to is a 2009 team.

But there are more similarities than differences .

This season isn't much of a gift.

As defensive coordinator Will Muschamp said last week, "you can't point to one little thing and wrap it in a bow."

Mack Brown targets three areas for improvement. And about that consultant rumor?

"We had 101,000 consultants," Brown said, noting the attendance at Royal-Memorial Stadium. "None of them were paid."

And he is not burning down Belmont.

After a loss to Baylor dropped the Longhorns to 4-4 and sealed the end of their nation-leading run of nine consecutive 10-victory seasons, the call for Brown to make radical adjustments is louder than ever.

More problems for the offensive line.

If there was one thing the Texas Longhorns could hang their hat on, it's that the offensive line and Garrett Gilbert appeared to be getting better during the past two weeks.

But the offensive line took another hit Monday as the Longhorns announced left guard Michael Huey will miss four to six weeks with a right knee injury.

Did anyone ever think you would see a reporter write this?

Five Big 12 teams enter November bowl-eligible. Defending champion Texas, which played in the national title game last season, is not among them.

The good news is that we have eight chances.

Well, at least we are still on the national media's radar.

The Aggies switched QBs and things are looking up in College Station.

Nebraskans who think the Huskers' clubbing of Missouri created a clear path to the Big 12 championship game need to take notice of a starting lineup change made last Saturday in College Station, Texas.

The switch puts a whole new heartbeat into Aggie football, making A&M (5-3, 2-2) more of a threat in November than anyone imagined, including Nov. 20 against Nebraska.

Maybe Mack Brown should get some advice from Mike Gundy.

Whenever the Cowboys' offense arrives in the red zone, opposing defenses must make a choice: Either stack the box to try to keep Kendall Hunter, the Big 12's leading rusher, out of the end zone or provide help on the outside where Justin Blackmon, the Big 12's leading receiver, is consistently winning one-on-one battles with cornerbacks.
OSU ranks No. 2 nationally in red zone scoring this season, having scored on 35 of 36 drives inside an opponents' 20-yard line (97 percent). The Cowboys have scored 25 touchdowns (69.44 touchdown percentage) and 10 field goals (27.78 field goal percentage).

Another Cornhusker hit is under review.

Midway through the fourth quarter of Missouri's 31-17 loss to Nebraska on Saturday, Huskers safety Courtney Osborne blitzed off the edge of the line toward Missouri quarterback Blaine Gabbert's front side. He was left unblocked and delivered a huge hit that had Gabbert slow to get up.

The Cowboys currently use the same sort of lifts that are common for many college football teams. One tipped over at Notre Dame last week in gusty winds, resulting in the death of a student camera operator.

Gundy says that accident scared him, and convinced him that permanent structures should be built. He says it's common for winds to be steady at a reasonable speed during practice, and then a stronger gust will come out of nowhere. 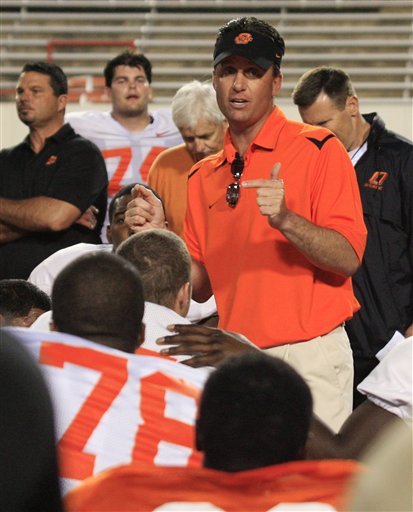 Gundy should have patented the look.

The Post originally broke the story of Big East's interest in seemingly unlikely expansion candidate TCU. The interest turned out to be reciprocal. If you believe that college football is trending toward the mega-conference, then schools need to get into a BCS conference before the window of opportunity closes.

There are some strange names atop the BCS standings this season.

Back in August, no one pegged Auburn and its star quarterback Cameron Newton -- a transfer student whose page in the 2010 Tigers Media Guide was smaller than the long snapper’s -- and Oregon, a squad whose expected starting quarterback was dismissed just months prior to the start of the season, to be the nation’s top two teams come the start of November. Even fewer pundits had the rest of the pack -- in just about every FCS conference and division -- to be so tightly crammed together following the Halloween weekend. September may be baseball’s month for pennant races, but this November is sizing up to give it a run for its money in terms of down-to-the-wire conference and divisional races.

Someone paid good money to find his out?

According to a 2007 study by the University of Texas, football game days are among the heaviest days for alcohol consumption. Starting this football season, TxDOT is taking the lead in tackling this issue by raising awareness of the dangers of game day drinking across the state.

Mark you calendars. FoxSports has the bowl schedule.

The NFL creeps further and further into your kid's daily existence.

This Georgia coach shows character and poise during their game with Florida.

The Four Dudes and their mid-season report.