Can you just make some decisions before next August?

"I have a lot of work to do here," Brown said. "There's no timeframe on it, no timetable."

It would appear that Missouri will be skipped by the Cotton Bowl in favor of Texas A&M and end up in the Insight or Holiday bowl. Is that fair?

So it doesn't matter that Mizzou at 10-2 finished with a better record than A&M or trounced the Aggies 30-9 in College Station. The decision as to which bowl game it goes to will once again come down to an unfair backroom deal.

The Dallas Morning News has a source that confirms the Aggies have accepted a bid to the Cotton Bowl.

2. Big 12 (LW: 3): It makes the jump this week past the Big Ten. Four teams here with 10 wins and another with nine. That's a more competitive top tier than the Upper Midwest league can boast. Also, it has the best record vs. other BCS teams. The downside? The 12 teams combined to play only a dozen games against other BCS-league programs.

The boys over at Facebook are really messing up recruiting.

On Monday, November 15, 2010, Facebook made the NCAA recruiting rules obsolete. No one would have argued the rules were perfect before that date, but they still worked well enough. And one company didn’t do all the damage overnight. This was just the straw that broke the camel’s back.

Because on that Monday, Facebook introduced a new messaging system that blends email, text messaging, instant messaging, and social networking. And with that announcement, the NCAA membership is forced to come up with a new paradigm for how we regulate recruiting.

The coaching carousel. Mark Richt plans to stay in Georgia, Pitt may hire a moving van for Dave Wannstedt, and no one has called Les.

UConn wants their shot at a BCS bowl.

Connecticut isn't making any apologies for putting itself in position to receive a BCS bowl berth.

The four-loss Huskies have been a Division I program for less than a decade, but will earn at least a share of the Big East title, and the conference's automatic BCS bid if they beat South Florida (7-4, 3-3 Big East) Saturday night.

"I know that people were giving Boise a lot of stuff, and Boise's a great team, they can play, but why not give us a shot as well," quarterback Zach Frazer asked. "We have a right to be there, if we win out."

Bill McCartney's past could hurt his future.

McCartney, 70, has openly lobbied to become Colorado's coach, replacing Dan Hawkins, who was fired earlier this month. It's a job McCartney held from 1982-94. 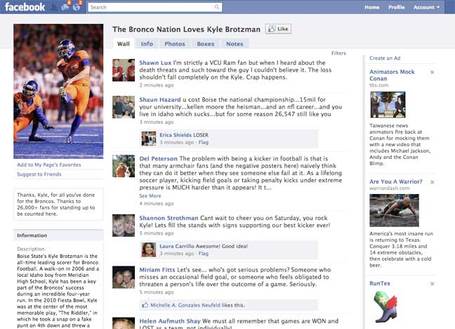 Is the Big East relevant again?

The Big East took a major step its rebound to football relevance Monday with the announcement that Texas Christian University would be joining the conference. TCU, ranked third in the Bowl Championship Series standings and both major polls, instantly gives Big East the football powerhouse they have been sorely lacking since the defections of Miami, Virginia Tech and Boston College in 2003. The Big East, in turn, gives TCU an elusive automatic BCS bid, and, by the 2012 season—which is when TCU will move all of its teams to the conference—will showcase the Horned Frogs on a much bigger stage than they were featured on with the Mountain West. Never before has the prospect of a horned frog and giant orange joining forces generated more talk.

First item on the Big East agenda? Do some research on the TCU mascot.

Dick Vitale sums it all up:

But then I ask you a very simple question: In today's modern thinking, do you think TCU's wrong joining the Big East? Obviously, no. I think they're just frustrated with the fact that they can't be part of the BCS, basically. And now they are. It was driven obviously by football. I think basketball is going to have a very tough time. And I think what people don't understand and really comprehend, they say all sports. What about academics? We always hear everybody talking about these presidents, 'academics, we got to care about the kids, care about class time.' Well, if they're going to do all sports, you start talking about tennis and golf and all that, traveling. They're not going to travel like the football team: fly in, play their game and fly back, etc. I mean give me a break. It is done very simply ... dollars, dollars, dollars. Uncle George Washington, piles of it and that's what it's all about. It's all about dollars. It mine as well be a professional league rather than a collegiate league."

But here's the thing about the Frogs migrating to the Big East: it gives the appearance that the Big 12 is content with only 10 teams, and that is bad news.

The conference-championship game is a money grab.

After managing for decades to choose their champions without title games, the conferences began expanding their memberships and staging the games during the 1990s to milk money out of TV networks and traveling fans. Quite often, these games don't even turn out to be good: Fewer than half of them have been decided by 10 points or fewer.

I'm sorry the guy lost his job, but this is pretty funny.

The staffer was a part-time employee, according to UA Public Relations Director Debbie Lane, but has not been named by the university. Two of the pre-Iron Bowl song choices were "Take the Money and Run," by The Steve Miller Band, and "Son of a Preacher Man," recorded by Dusty Springfield in 1968 and later by recording legend Aretha Franklin.

(In case you aren't familiar with the other song. It's a classic.)

It is Land Thieves Appreciation Week here at BDR...Checking in on the Sooners.

The Sooner no-huddle is no joke.

But certain offensive minds in college football – initially the architects of the run-and-shoot, then "Air Raid" inventors Hal Mumme and Mike Leach, and now Chip Kelly – managed to seamlessly integrate the no-huddle approach with an emphasis on plays run instead of time of possession.

Oklahoma offensive coordinator Kevin Wilson is at the cutting edge. He made the shift before the 2008 season with quarterback Sam Bradford, and produced an offense that averaged 51 points and 547 yards per game and 6.9 yards per play. OU has been running the offense ever since, with varying degrees of success.

Injury report. Everyone is cautiously optimistic about DeMarco Murray's return for the title game and Taylor Martinez's status is day-to-day.

Coach Bo Pelini is not disclosing much information about the health of Taylor Martinez, the Huskers' injured starting quarterback who missed Friday's game.

Martinez took a couple of reps in practice Monday, but he is suffering from turf toe on his left foot and a sprained ankle on his right.

No interceptions? No problem.

The interceptions have not piled up for Prince Amukamara this season.

The senior cornerback, without an interception this year, was named a first-team All-American on Monday by the American Football Coaches Association. He's among three finalists for the Thorpe Award, presented to the nation's top defensive back, and more honors are sure to come Tuesday as the Big 12 coaches unveil their postseason honors and all-conference team.

“It's not about stats,” NU coach Bo Pelini said Monday. “People realize he's playing his butt off, and he's been playing that way all year.”

A match up of old Big Eight rivals.

It seems fitting that No. 13 Nebraska will end its tenure in the Big 12 Conference by playing a longtime nemesis in 10th-ranked Oklahoma.

The bitter rivals will clash at 7 p.m. Saturday at Cowboys Stadium in Arlington for the Big 12 championship, the Cornhuskers' final game before moving to the Big Ten.

"It's just fitting that it's us two here at the end," said Oklahoma coach Bob Stoops, who grew up an Oklahoma fan. "I grew up as a kid all the way up in Northeast Ohio and I can remember as a young kid in grade school following the Steve Owens and Greg Pruitts and Joe Washingtons, and couldn't wait for this game.

It just isn't all it is cracked up to be. The Cornhuskers are really excited to see Bob.

Almost as annoying as all the roommate references. Another touchy-feely stoy about the Stoops' and Pelini families, Youngstown, Ohio, and Cardinal Mooney High School.