Jai Lucas could be insurance for the Horns.

He did, and Lucas made 2 of 4 three-pointers in the second half against Rice on Saturday, helping the Longhorns to a 62-59 victory.

Lucas, a reserve, could come in handy this season, especially when the Longhorns face zone defenses, as they did against Rice.

He played 30 minutes, his longest stint as a Longhorn, contributing eight points and three assists against no turnovers. He averages 18 minutes, eight more than last season.

Barnes summed up Hamilton's changes in a word.

"Maturity," he said. "And you'd expect that. He's been terrific in terms of things we've asked him to do."

Hamilton gives part of the credit to Los Angeles Lakers forward, Ron Artest, whom he met this summer.

"He told me to be patient and work hard on and off the court," Hamilton said. "People might not like him because of his antics, but he's a good dude. I appreciate him giving me input on some things I need to work on."

Brown wants to announce the changes in one fell swoop and not have to do the piecemeal approach with one change — and one bad headline — at a time. The other reason is Brown hates controversy and probably figures if one or two or more of his assistants retire or resign, he doesn’t have to fire them. He hates firing assistants and has let go only two in the previous 13 seasons.

Speculation is rampant about who’s coming and who’s going with no solid news. I was told Tuesday that Brown spent individual sessions with all of his nine assistants on Sunday and told some of them their jobs were safe. Running backs coach Major Applewhite and tight ends coach Bruce Chamber were the only two offensive coaches who appear to be returning for sure. Otherwise, anything is possible.

Huh? Did the NCAA do what I think it did? Did it basically rule that a father and a third party can actively, brazenly and with impunity shop a player around for hundreds of thousands of dollars -- and the worst thing that happens is the father has to lie low and the third party has to disassociate himself from the programs in question?

Did it just get embarrassed by a rules loophole the size of Jordan-Hare Stadium, the gist of it being: Your old man and another guy can put you on the open market, but as long as you don't know about it, you're good to strap it up for the next big game?

The answers: yes and yes.

Damn Land Thieves. If Nebraska is looking for a conspiracy, they might check this.

It is official. The Aggies are going to the Cotton Bowl. Missouri isn't complaining.

But I don’t believe you’re going to hear any complaining out of Missouri officials or players whether the Tigers wind up in San Antonio for the Alamo, Tempe for the Insight or San Diego for the Holiday this year.

And consider that the possible opponent – as I’m hearing today – might be Iowa, Penn State or Michigan (all 7-5 in the regular season).

It is Land Thieves Appreciation Week here at BDR...Checking in on the Sooners

It is a bitter pill to swallow.

In addition to keeping his fan base happy, OU's coach now has nine Big 12 schools and the entire Stoops family depending on him to whip Nebraska in Saturday's Big 12 championship game.

While it might be difficult, even bitter enemies like Texas and OSU better cheer hard for OU. The Big 12's pride is at stake, and it's up to Stoops' team to prevent the turncoat Cornhuskers from winning the championship contest, a postseason event they helped kill.

It is just so exciting.

Coach Stoops spoke recently about what playing a team like Nebraska in such a big game means to his team, "One of the most special rivalries in all of football. It's really fitting that the last time we're in the conference together to have, I like to say, one more go at it. It's really kind of exciting for everybody."

Brent Venables is an intense guy.

On the bus ride back to Norman after Oklahoma's defense kept Oklahoma State's high-powered offense out of rhythm much of the game, OU defensive coordinator Brent Venables wasn't celebrating a Bedlam win.
"He had his laptop out and was already thinking of ways to scheme Nebraska," said linebacker Travis Lewis. "That's how intense a guy he is."

Here are five things you need to know about the OU-NU rivalry.

Is Nebraska the new Oakland Raiders?

The head coach had a near meltdown, unleashing his fury on the referees and his quarterback, then chasing after one of the officials before going to the middle of the field for the postgame handshake.

The big boss called out the coach in the media before having a do-better talk with him.

It's actually the Nebraska Cornhuskers.

Bo Pelini is a sideline maniac.

Bo Pelini is college football's reigning sideline maniac. He stole the crown from Mike Stoops. Who took the status from his brother. 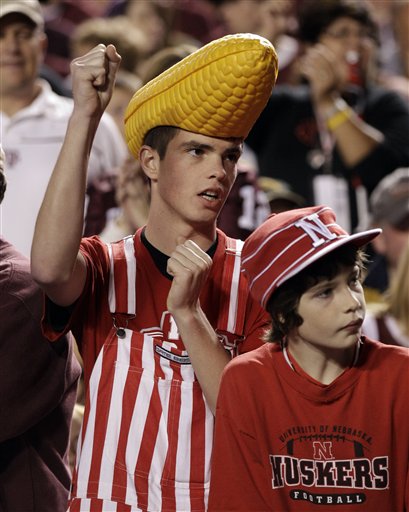 They should arrest those people for wearing corn hats. Now the police are involved.

Big 12 Conference Commissioner Dan Beebe has gone to authorities with what he has said were threats against him and his family by Nebraska football fans.

The Dallas Police Department is investigating a report of multiple harassing telephone calls and letters to Beebe's Dallas home as well as to his family's former residence, a department spokesman told The World-Herald on Tuesday.

Some of you just want a meteor to land on JerryWorld Saturday night. Here you go.