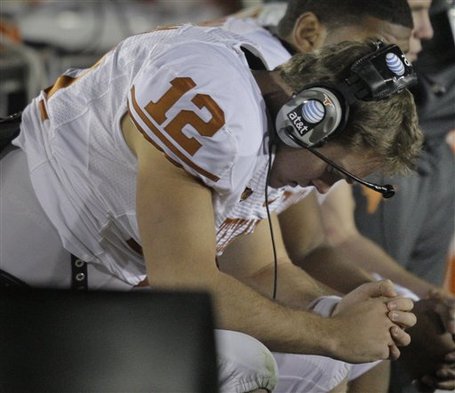 For the next week you are going to be inundated with every manifestation of best/worst of 2010 you can imagine. I've put together my own.

I learned I don't like losing. It's been 20 years since I haven't been to a bowl. - Mack Brown

9. Kansas State beat the #1 Horns in basketball. You know the story of the rest of the season.

8. The basketball team losing in the first round of the NCAA Tournament in OT.

6. Losing to Baylor in basketball and football. Baylor, for cripes sake.

5. The 2010 offense debacle. It was just all bad and I refuse to look for videos.

4. Texas losing to TCU in the super regional tournament and missing out on the CWS.

2. Losing the MNC to the Crimson Tide.

This song by Kelly Clarkson sums up our relationship with Texas. It is a twisted and dysfunctional union, but we can't live without the Horns.

Your life could actually be worse. You could be a graduate of OU.