Share All sharing options for: Bevo's Roundup: Just a few more days of 2010 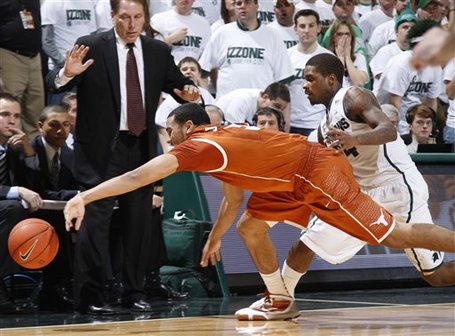 UT officials declined to comment on the report, which said Kennedy's hiring at Colorado will be officially announced next week.

And they believed him? The Badgers aren't worried about losing their offensive coordinator.

Chryst gave a nice hint about his football philosophy when he said he would rather have an offense that was good at a few things rather than one that was average at a lot of things. Folks in Austin would settle for being good at two things, as long as scoring a lot of points was one of them.

How about another? Mack Brown to the Titans. 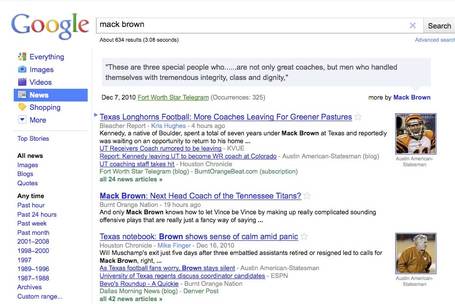 It's in a Google news search so it must be true.

Need a quick tax write-off before the end of the year? Bellmont needs your money.

We need a new conference name. Any suggestions?

The pressure is on.

So we have to rely on bowls for clarity on conference supremacy. In theory, evenly-matched games on neutral fields. The best kind of football.

With that said, the Big 12 is in trouble. Missouri’s 27-24 loss to Iowa — which was completely avoidable; Blaine Gabbert’s needlessly-thrown pass which was intercepted and returned for a touchdown in the fourth quarter gave the Hawkeyes a life preserver — puts the Big 12 in a hole and makes today very important.

But nothing angers Snyder, a self-proclaimed control freak, more than a change of plans.

So the Wildcats’ trip to New York, for Thursday’s Pinstripe Bowl against Syracuse at Yankee Stadium, hasn’t been the most stress-free outing of his life.

"He’s pretty religious with his schedules," senior guard Zach Kendall said. "And we’ve been at the mercy of bad weather and traffic since we got here. I think it’s made him a little antsy."

Land Thieves prefer the beach. People want what they can't have.

At least the Bears didn't have to travel very far.

The outgoing Oklahoma State offensive coordinator doesn't exactly seem like the greeting card type — he has been known to rip into his guys after they score touchdowns — but if there was ever a time to be a little touchy-feely, this would be it.

Holgorsen wouldn't be the next head coach at West Virginia without Blackmon and Weeden.

Everyone has issues. That domestic disturbance had absolutely nothing to do with Tech DC James Willis' decision to leave.

The Red Raiders put out the injury report for the bowl game.

Will Mike Sherman stick around?

Kansas State on that leadership thingy:

People often make the mistake of assuming a team's best player doubles as the leader, but that's not always true. Take Kansas State from last season, for instance. The best player was Jacob Pullen, but the leaders were Denis Clemente and, to a lesser extent, Luis Colon. Clemente and Colon are now gone, and KSU is leaderless. Even worse: Pullen and Curtis Kelly are currently suspended because of NCAA violations, which leaves (fill in the blank) as the only option. Hopefully, you didn't fill in that blank with Jamar Samuels. Because when he was asked if he could be a leader after Tuesday's loss to UNLV, this is how he responded: "We'll try that leadership thingy Frank is talking about." Leadership thingy? Yikes.

What's even more intense than Nebrasketball?

Nebrasketball about to embark on its swan song through endure one last blanket party from the Big 12.

Yes, payback is a bitch, and Doc Sadler's about to suffer a tenfold return on the goodwill spread by the Pelini brothers this year.

We appreciate the love, Matt. Big 12 Hoops has the power rankings.

What Matt Says: True to my word I moved the Longhorns to the top of my rankings this week after a great true road win over Michigan State.

It just breaks my heart when Scott Drew has a bad day. There's some bad news for the Bears.

Baylor got a reality check this weekend.  They have only played three legitimate games, and they lost all three.  Gonzaga was desperate for a win, but Washington State and Florida State were two different stories.  All three are quality teams, but that's no excuse for a team picked in the top 25 (and in some cases the top ten) this season.

The Wall Street Journal has a list of the most coveted college football coordinators.

Since college football is going through its annual coaching merry-go-round, there's no shortage of assistants eyeing a promotion. Chances are they're offensive or defensive coordinators spending too little time with the family and too much time watching game film and eating takeout. So who are the next headset-wearing geniuses?

If you are going to cheat, go all out.

And that's all you need to know about KSU's situation.

The players got hooked up at a store, got caught and now they're paying a price while our shopped-by-his-father Heisman Trophy winner continues to prepare for the national title game, and, yes, there's something hilarious about that.

They just wanted to look good.

Far as I know, this isn't a "booster" problem or "agent" problem as much as it's a "take advantage of this hookup at a local store" problem, and good luck trying to convince young people to not do that.

In fact, good luck trying to convince anybody to not do that. I mean, I'm offered extra benefits -- not those kind of extra benefits! -- all the time, and I'm just a stupid sports writer who also happens to talk on the radio for a living. So you can imagine what it's like for a famous college kid in a college town.

Hear no evil, see no evil.

The stereotype of the big, dumb jock is not dead. The NCAA is telling us this loudly and boldly.

From the organization that gave us Cam Didn't Know comes Five Football Student-Athletes From Ohio State Who Didn't Know.

Incredibly, that was the NCAA's explanation for not suspending for the Sugar Bowl five Buckeyes who sold their souls -- or came darn close. They didn't know it was wrong to sell their jerseys, trophies and keepsakes. As it stands, the five players will miss the first five games of the 2011 season for selling awards, gifts and uniform gear and getting various extra benefits. A sixth must sit out the first game of 2011 for lesser violations.

That bowl game had absolutely nothing to do with Ohio State's lenient punishment. None whatsoever.

On Tuesday, after the apologies, Sugar Bowl CEO Paul Hoolahan had no problem letting everybody know that he pressured Ohio State to fight as hard as it could to keep the players eligible for the game, and have the suspensions put off until next season.  Apparently Hoolahan first heard about the suspensions on December 7, a full two weeks before they became public.

"I made the point that anything that could be done to preserve the integrity of this year's game, we would greatly appreciate it," Hoolahan told The Columbus Dispatch. "That appeal did not fall on deaf ears, and I'm extremely excited about it, that the Buckeyes are coming in at full strength and with no dilution."

Take a quiz! Match the cheater with the punishment.

You just figured this out?

The NCAA has turned college sports into a hotbed of hypocrisy.

As college sports continue to increase in popularity, everyone and anyone is cashing in on the games. Everyone, that is, except the young athletes who make those games so compelling.

Call us sticklers, but as long as the BCS is around, its bowls should host only top-notch matchups. And that demands one more tweak to an infinitely tweakable system: If a team fails to finish in the Top 20 of the BCS rankingsUConn was unranked -- it can't play in a BCS bowl. It's odd that we even have to suggest this. After all, what do BCS rankings count for if not to decide who gets to play in BCS bowls?

It's fun to mess with a kicker. Calling time out can really work.

Nadav Goldschmied, an adjunct professor at the university’s psychology department, examined field goals over six seasons, 2002 to 2007. He identified 273 attempts that he considered "pressure" kicks, those attempted in overtime, or with one minute or less remaining in regulation when the kicking team was tied or trailing by 3 points or fewer.

Of the 163 field-goals attempted when a timeout was not called before the kick, 80.4 percent were successful. But in the 110 cases when the kicker was iced, the success rate dropped to 66.4 percent, a difference that Goldschmied — and probably every coach in the N.F.L. — considers significant.

Not surprisingly, kickers were more successful when their team called the timeout (83.3 percent), than they were when the opposing team did (64.4 percent). That is an indication that it is the element of surprise and disruption to the routine, not merely the extra time to think about the stakes, that causes the difficulty for kickers. The study found the success rate after icing was not affected by home-field advantage or the kicker’s years of experience.

What school wins the bowl ratings?

When Southern California is in a bowl game, TV viewers tune in. Same goes for Florida State, Miami, Notre Dame and most teams in the Big Ten. Nebraska and Oklahoma surprisingly don't move the needle, though. And a few big-name schools—including LSU, Clemson and Georgia Tech—actually move it in the wrong direction.

Football has quite a following in Israel.

As popular as the N.F.L. is in the United States, past attempts at spreading American football internationally have had limited success. Leagues like N.F.L. Europe, which shut down in 2007, have had problems drawing fans. But in a country so closely tied to American politics and culture, Israel is quickly gaining a football following. New players are joining each week, and crowds, though small, are steady.

"What we’re seeing is the beginnings," said Uriel Sturm, the commissioner of the I.F.L. "In Israel, there are two major team sports: soccer and basketball. After that, it’s almost bare. We’re trying to take American football up to that next tier of sports."

Arizona lobbied for a a bid to the Alamo Bowl.

A TCU Rose Bowl Championship shirt was nowhere to be seen on the website, and is not among the 72 items for sale on TCU's team page. An ESPNShop customer service representative said he did not believe they had TCU championship shirts for sale.

Another quiz. Are you smarter than a football player?

Your bowling guide. Plan the rest of your week accordingly.