The last time we spoke, Texas baseball was fresh off the most thrilling postseason in team history. In case you forgot, the Horns had the longest, gutsiest performance in college baseball history, then they played another month of awe-inspiring baseball. Over that span there was a series clinching walk off grand slam, a super regional win in Austin, a walk off walk, a magical comeback, a prodigious clout, and one of the finest pitching performances you'll ever see on the biggest stage in college baseball. Texas finished one win shy of another national title and returns to action this spring as the #1 team in the nation in a number of polls.

Defections to the pros are a fact of life in college baseball and the 2010 squad will have its share of losses to deal with. Postseason heroes Preston Clark and Austin Wood graduated, junior 1B Brandon Belt as well as a number of talented would-be freshmen made the leap to the pros. But enough of what was lost. The Horns added several new freshmen and newcomers Jonathan Walsh (one that GOBR was rightfully very afraid would be gone), Cohl Walla and Josh Urban are the ones most likely to make an impact in 2010. Part I will take a look at the big questions facing the Horns as they look to make it back to Omaha. Part II will look at the pitching, Part III will look at the offense, and Part IV will check out the defense. So join us after the jump for a look at the big issues for 2010. 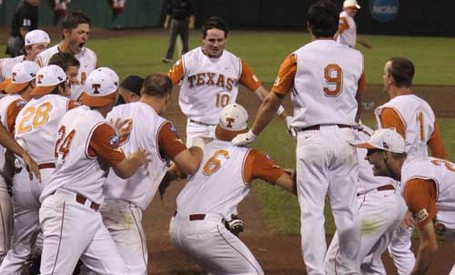 1) Can the pitching really get better?

The 09 Horns gave up a full 1.5 fewer earned runs per game over the 08 Horns, bringing their ERA below 3.00 (2.95) for the first time since 2005. We wouldn't expect for the team ERA to drop another point and a half, but the Horns bring back the entire 2009 starting rotation of Chance Ruffin, Cole Green, Taylor Jungmann and Brandon Workman (who sits #8 in at least one MLB Mock Draft). Ruffin has been moved to closer, a switch that could make a whole lot of sense thanks to his fiery temperment. Freshman sensation Austin Dicharry returns and junior College transfer Paul Montalbano, junior Stayton Thomas (who we really like as a reliever), sophomore Sam Stafford (he of the rocket arm), and freshman Josh Urban are likely to see action as relievers.

Green pitched brilliantly in the postseason and probably will start out as the Saturday starter. Ruffin seemed to run out of a bit of steam in the postseason and we figured he'd be the Saturday starter until the switch to closer was announced. That Ruffin would've been the Saturday starter says nothing about his ability, though, and everything about the capabilities of Jungmann. All you really need to know about Jungmann is to remember back to his game two performance against LSU in Omaha. Complete game, no earned runs, nine strikeouts (not to mention his 5.2 IP, 2 hits, 6 Ks against ASU). That's why Ruffin isn't the Friday starter anymore. Workman will round out the pitching rotation as the Sunday starter, at least to start the season, and may be the most talented Sunday starter in the country. We'll talk more about the pitching in Part II, but suffice it to say we're REALLY excited about the starting rotation. The weekday starter is a bit tougher to predict but Stafford, Urban and Thomas are good candidates for weekday starts at this point.

Brandon Belt was a three year starter and consistent performer at 1B. You knew you were getting a tall, athletic, decent hitting giraffe every day for three years. Now he's gone and former RF Kevin Keyes is taking over. If it works then you've put your best hitter in a position where he won't need a defensive replacement in late innings. If it doesn't then you could have a year of strife at one of the most important defensive positions and no certain place for one of the only guys on the roster that really scares opponents with his power. Beyond Keyes the pickings are slim as far as finding a 1B with college experience. Tant Shepherd played some first base in the first exhibition game, sophomore Sam Stafford has to fit in somewhere and he's a big guy, or maybe freshmen Cohl Walla or Jonathan Walsh could give it a try. Regardless, Keyes to 1B working just makes things so much easier. Well, Augie has spoken. Shepherd will be playing 1B and Keyes is going back to RF. Shepherd is probably less of an experiment defensively but more of a risk offensively. It adds to the logjam in the outfield but Keyes is certainly a better option for RF than Kyle Lusson.

4) Which Russell Moldenhauer will we see?

Moldy hit .278 with 6 homers in 144 ABs as a freshman. He hit .355 as a sophomore and appeared to be breaking out before getting hurt in the 2008 postseason. Moldy wasn't doing much as a junior, but then June happened. He tied a CWS record with 4 homers (his only 4 of the season) and would've likely been CWS MVP had the Horns been champs. If the preseason is any indication, 3 HRs against Baylor and Texas State, then Texas may have a seriously good DH and a lineup with some good pop.

5) I want to know what's the fella's name in left/right field?

On Opening Day 2009 the starting left fielder was Tant Shepherd. By the end of the season we had seen David Hernandez, Tim Maitland, and Kyle Lusson take a shot at the job before former starting catcher Preston Clark took over in the postseason. Right field was nailed down most of 2009 by Kevin Keyes, and apparently will be again but his (hopefully successful) move to the infield leaves a void there as well. Connor Rowe will be in center, but it seems like there will be a free-for-all for the left field spots between Kyle Lusson, Sam Stafford, Cohl Walla, Paul Montalbano, Tant Shepherd and Tim Maitland. There's a lot of talent there but not a lot of experience.

Those are our top five big questions for 2010. Overall they're good questions to have, much better than 2007's "do we have a Friday starter?" and 2008's "I can field a grounder, can I play 3B?". Join us for Parts II-IV for detailed looks at the pitching staff, infield and outfield.