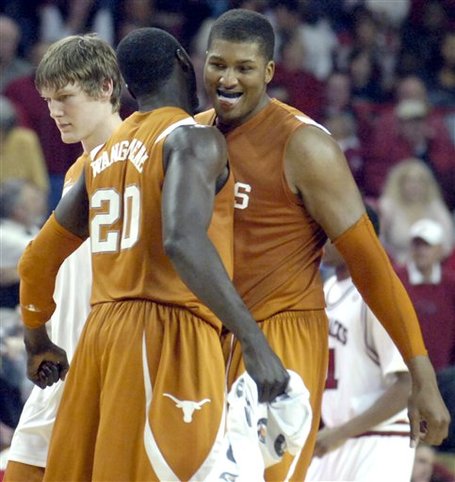 Rick Barnes has the deepest team in the country, but that doesn't amount to much if the Horns continue to struggle offensively, and while the Texas basketball coach struggles to keep this unit afloat, the one part that can bring it all together is hard to miss.

He's 6-feet-10-inches, with a terrific wingspan, a winning smile and a game that's sunk to levels that would disgust a seasoned plumber.

Dexter Pittman is lost in this offense, and Texas' struggles have coincided with the struggles of the Longhorns' enigmatic post, who has gone from lotto to squatto in the last couple of weeks.

It's not an effort thing. Pittman is playing hard enough. He's just not producing.

No kidding. Texas needs to find some answers.

In the span of 21 days, Texas has gone from No. 1 to just another one.

"Rick will figure it out," Kansas coach Bill Self said.

So much for those new uniforms.

We are not being paranoid. Someone is out to get us.

Texas athletic director DeLoss Dodds says the Longhorns football program was 'singled out' by a new NCAA rule that drastically limits recruiting by defensive coordinator Will Muschamp, the Longhorns' head-coach-in-waiting.

You've heard this before. Sooners arrested.

The Oklahoma Sooners earned its biggest win of the season Saturday afternoon beating Texas, shortly there after two of its players were arrested. Stephen Pledger and Andrew Fitzgerald, both freshman, were arrested and cited for petty larceny.

Everyone gets a fresh start at Tech this year.

But like all coaches in new jobs, Tuberville needs players first and allies second. The Mike Leach mess won't touch him but a slow start will. James was The Pirate's problem. To Tubs, he's a potential asset with 32 career catches. Besides, Tuberville has been in a lot worse situations. He arrived at Ole Miss in 1995 with only 55 scholarship players. At the end of his 10-year stay at Auburn, his position became untenable with the administration and a mega-booster who thought he ran the university.

Really, it's true... The Cornhuskers may actually have a quarterback next year.

The lone quarterback recruit in the 2010 Nebraska signing class unveiled last week, Carnes didn't get heavily involved with the Huskers until last month — when his commitment of more than a year to South Florida ended after the school fired coach Jim Leavitt.

It just so happened that the Huskers needed a QB after Tyler Gabbert did like big brother Blaine, backing out of a long-standing pledge to NU in favor of home-state Missouri.

The turn of events may make it seem like the Carnes-Nebraska marriage was one of convenience. But by all accounts, the Huskers did not sign Carnes just to get a QB in the class. In fact, in the end, they may have come away with the best prep quarterback in Florida.

Kirk Bohls knows why Lane Kiffin offered a scholarship to a 13-year-old.

Don't understand all the big fuss over Lane Kiffin getting a verbal commitment from a 13-year-old, seventh-grade quarterback from Delaware. Don't you think the USC football coach needs to have somebody around of his own intelligence level he can communicate with? Mike Garrett, Mr. AD, have you cleaned out your desk yet?