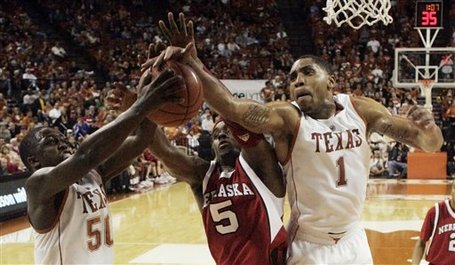 Spring football. Some players need to be replaced and the position battles are on.

The bad news for Texas defensive coordinator Will Muschamp: star defensive end Sergio Kindle and tackle Lamarr Houston departed for the NFL draft. The good news: ends Sam Acho and Eddie Jones, who combined for 15 sacks in 2009, are both coming back. Jones might be the leading candidate to replace Kindle, but he'll have to hold off Russell Carter and promising sophomore Alex Okafor. Replacing Houston's productivity might be more problematic. Sophomore Calvin Howell, who had four tackles and one sack in 2009, was the No. 2 tackle at season's end.

The NFL Combine is two weeks away.

It is the off-season and everyone is bored.

The reports come daily now—the Big Ten wants Texas, the Pac-10 wants someone times two, and, in sum, college sports sits on the brink of another expansion era.

Get used to it, old-schoolers.

Welcome to the major story line of the next 12 months.

We are THE BIG FISH.

The news that Texas, according to the Lawrence Journal-World, has had discussions with the Big Ten should be viewed as potential landscape-changing news. So much so, that almost immediately, Nebraska athletic director Tom Osborne told the Lincoln Star-Journal that his school would listen to a phone call. Nebraska would be a coup, a big fish to land. But Texas is not just a big fish in The Great Conference Fishing Expedition of 2010. The Longhorns  are THE big fish.

Kirk Bohls says no way, no how.

I'll put this as succinctly as possible: Texas isn't joining the Big Ten. No way, no how. So put down your Ohio State pompoms and that JoePa pennant.

Richard Justice has already packed his bags for road games.

First, as a personal aside, I'd be trading Waco for Madison on my travel schedule. Don't cry for me, Argentina. I'd manage. I'd rather have an annual trip to Berkeley, and maybe it will be on the table before this is done.

Lubbock for Columbus? Check. College Station for Ann Arbor? Don't ask. As for giving up Stillwater and Manhattan, well, it would be a struggle, but the Twin Cities is way nicer than any Big 12 city.

It is too far away.

But the money would be good. And the Big 10 is on par with us academically.

Not surprisingly, money would be a big motivator for the Longhorns. The St. Louis Business Journal recently reported almost all Big 12 schools would receive an extra $10 million windfall, with most of that coming from Big Ten Network revenue. And with the addition of certain markets and a conference championship game that expansion would create, the $10 million figure could rise by several million. The Big 12 also divides its television revenue unequally based on television appearances, while the Big Ten divides revenue evenly among all schools regardless of success, so a steady revenue stream also could be attractive to Texas.

Texas would also stand to benefit academically from a move. In the latest U.S. News rankings, five Big Ten schools are ahead of or tied with Texas' No. 47 ranking, and all Big Ten schools are within the top 71. Meanwhile, the only other Big 12 school in the top 71 is Texas A&M at No. 61. So while none of Texas' peers in the Big 12 could match the Longhorns' research capabilities, the Big Ten would be full of possibilities.

Here's your laugh for the day. Texas wants to go to the Big 10 because we are trying to get away from Kansas State.

There's no way Cal, Stanford, Oregon and UCLA are going to invite a school as conservative as BYU into their conference. They can dress it up with talk about research institutions and market-sharing and Sunday games, but fact is the league from the Left Coast doesn't want conservative BYU, period.

It makes things too complicated.

But if Colorado goes to the Pac-10 along with Utah, as speculated, BYU could join the Big 12. If I were in charge, I'd kick out Baylor, just because it didn't belong there in the first place. For good measure I'd fill that vacancy with TCU or Houston.

How would the Big 12 react to losing Colorado and Missouri?

If Missouri or Colorado leave, the Big 12 would go get TCU from the Mountain West. While that would wound the MWC, the league would most likely then invite Boise State.

If both Colorado and Missouri left, the Big 12 would get TCU and, maybe, Houston? Either way, the Big 12’s TV stature would shrink.

Oklahoma State and A&M moved their game to Sept. 30.

Texas A&M will get some prime-time love from ESPN for its Big 12 football opener.

The Aggies have moved their first conference game at Oklahoma State to Thursday, Sept. 30 from Saturday, Oct. 2. The game will be televised beginning at 6:30 p.m. The shift gives the Aggies and quarterback Jerrod Johnson, a potential Heisman candidate, some exposure. It also moves the game away from the same day as the AT&T Red River Rivalry between Texas and Oklahoma in Dallas.

Mike Sherman has made a few more coaching hires.

The school announced Saturday that Sherman offered three assistant coaching positions to Steve Steve Kragthorpe (wide receivers), Dat Nguyen (inside linebackers) and Nick Toth (outside linebackers). All three have accepted, but their contracts do pend approval of the Texas A&M University System Board of Regents.

Dr. Saturday has the conference expansion mess figured out.

Maryland was not happy with the NCAA's new rule about the head-coach-in-waiting.

The University of Maryland said Thursday that it should not be bound by a new NCAA rule subjecting offensive coordinator James Franklin - coach Ralph Friedgen's designated successor - to the same recruiting restrictions as a head coach.

The rule is designed to ensure that assistant coaches who have been named "head-coach-in-waiting" don't enjoy recruiting advantages over those who have not, according to an NCAA legislative manual.

Maryland athletic director Debbie Yow said Maryland and Texas - which has named defensive coordinator Will Muschamp to succeed Mack Brown - are joining to combat the rule.

Ruffin McNeil is settling in at ECU.

Not much time has passed since McNeill reunited with his alma mater, but already the new East Carolina head football coach said he’s unloaded all of his Texas Tech gear, some of it going to Goodwill and some going with McNeill’s wife to church to be handed out.

Blame it on Thug U.

The memories have faded more than a little since the glory days of the 80s and early 90s. But the game is still paying a price for Miami's long-gone swagger. That had to be the conclusion when the rules committee endorsed a rule that would penalize teams for taunting on the way to the end zone.

Beginning in 2011 -- if the rule is rubber-stamped by an oversight committee -- points would be taken off the board if a player is flagged for a "taunting gesture" on his way to a touchdown.

Will the NCAA basketball tournament expand?

People who argue that the NCAA should fix the football postseason before tinkering with March Madness operate under the mistaken assumption that someone out there cares what they think. The BCS makes money, so it stays. The NCAA Tournament could make more money, so it expands.

Would an expanded tournament water down the product? Of course. Would you watch it? Probably, which means you're part of the problem.

It's February so it must be the Westminster Kennel Club show. This New York Times article shows what it takes to get a WKC Best In Show win.

A UT cheerleader made SI's Cheerleader of the Week. Don't say I never did anything nice for you boys.