Roddrick Muckelroy is getting ready for the biggest job interview in his life.

When you were a two-time All-Big 12 selection, led the Texas Longhorns in tackles for two consecutive seasons, notched an interception and a tackle for loss in the Big 12 title game and posted a 17-tackle game in conference play, you shouldn't need much training or guidance moving on to the next level of football, right?

Not even close. Every player, and that means every player from Tim Tebow to Colt McCoy, needs all the help they can get to earn that big paycheck when the NFL Draft rolls around in April.

Sergio Kindle just wants to be loved by everyone.

In four seasons as a defensive end in Austin, Kindle was credited with 148 tackles, one forced fumble and 16 sacks. Kindle said he fits in a 3-4 scheme and doesn't want to know which teams want him until draft day.

Colt McCoy will be throwing at the NFL Combine next week.

Despite a nerve injury to his throwing shoulder that knocked him out of Texas' BCS title game loss to Alabama, Longhorns QB Colt McCoy plans to let it rip at the NFL scouting combine next week.

"I see the doctors every week," McCoy told the Austin American-Statesman. "I go through the rehab process every day. I'm healing much quicker than normal."

Is McCoy the next Drew Brees?

"I think it opens some eyes. No question about it," said Gil Brandt, the former Dallas Cowboys director of player personnel and current personnel analyst for NFL.com. "To me, Colt is Drew Brees on the field and Drew Brees off the field. But he's about two and a half inches taller and he's faster."

The Texas Longhorns are at it again.

Less than two weeks after signing the No. 2 class for 2010, Mack Brown and his staff now have more than half of the Longhorns' 2011 class after receiving 13 verbal commitments, including eight members of the ESPNU 150 Watch List, over the course of 72 hours.

The Orange-White game will be played on Easter Sunday.

Texas is making a big mistake and showing a lack of sensitivity by playing its orange-white spring football game on Easter, April 4. That's a day that should be reserved for family and set aside for those who consider that the most blessed religious holiday of the year. Of course, Mr. Sunshine, Chris Hall, has graduated.

Case McCoy made the perfect decision.

Kevin Durant has some advice for Rick Barnes and company:

"It's all just about how you bounce back," Durant said.

Just two days away. The Horns are picked to win the Big 12 and a few more. Sophomore Taylor Jungmann will pitch Friday night’s season-opener against New Mexico.

Donald Sloan could be leading the Aggies right into the NCAA tournament.

Sloan is the conference's fourth-leading scorer (18.2 points per game) despite assuming defense of the opposition's best perimeter player, a chore that previously fell to Roland. With an 18-7 record (7-4 in the Big 12), Texas A&M is tied for third in the league, nearly upset national No. 1 Kansas Monday night and, barring a collapse, is a near-lock for the NCAA tournament thanks to an RPI of 13.

Is the Big 12 the toughest basketball conference in the country?

— Tough to navigate? "On any given night anybody in our league can beat anybody." — Rick Barnes, Texas.

— The best league in the country? "Open and shut case." — Scott Drew, Baylor.

— Good enough to get teams with losing conference records into the NCAA field? "Our league should not be discredited because teams are beating each other up." — Frank Martin, Kansas State.

Bo Pelini got a raise.

Bo Pelini’s new annual base salary is $2.1 million, a jump from last season’s $1.851 million, according to contracts released Monday by the NU athletic department.

Nebraska is open to offers.

"We haven't entered into any formal talks with anybody right now," Osborne said. "We're focusing on the Big 12. But I don’t think that means if somebody wanted to pick up the phone and call us, that we'd hang up on them. You listen."

Mike Sherman is banking on all those new coaching hires to make the Aggie football program competitive again. And we all know what has happened to the banking industry.

Nothing good happens after midnight. In Missouri or Oklahoma.

The reports of our death have been greatly exaggerated. No, the Big 12 isn't dead.

We'll believe it when we see it. The NCAA may make life uncomfortable for USC.

USC, facing allegations of wrongdoing in football and men's basketball, goes before NCAA Infractions Committee on Thursday. Veterans of the process say it will resemble a judicial proceeding, and USC officials could feel like they’re on the hot seat.

Here's a unique idea. Bet the Big 10 didn't think of that.

Ok, yes, I’m aiming right between the Big Ten’s eyes because of their apparent insatiable lust for Big 12 schools. There are now rumors of Texas being asked along with Missouri. And, even Colorado. I say, let the Big 12 go after the lowly Big Ten. In fact, let’s do even better than that. Let’s break up the Big Ten.

With all the expansion talk, what conference will get hurt the most?

There has been speculation that Utah may be one of the schools going to the Pac-10, and perhaps TCU eventually ending in the Big 12. And BYU wouldn’t hesitate to jump if some league could make room for the Cougars.

And as one would imagine, the league that would be hurt the most is the Mountain West.

The BCS should leave the NCAA?

If the leaders of the nation's top revenue-generating athletic programs want to save the bowl system, if they want to avoid a Justice Department investigation that would destroy the BCS on antitrust grounds, if they want to make oodles more money with minimum interference, they'll forget about trying to move a few chess pieces around the board and realize they need to start playing an entirely different game. 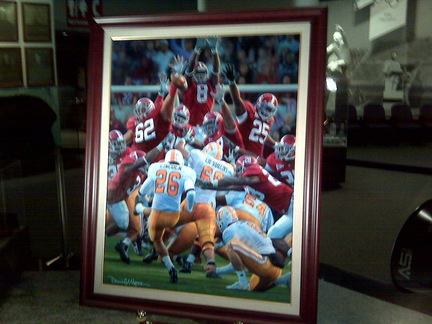