The Horns beat Tech, but their struggles aren't over.

"Escaped" is the operative word here. Draw no conclusions.

But the Longhorns (21-6, 7-5) are still struggling. It looks as though they will stumble toward March without their assist leader. And for the time being, the player who only two games ago was given the chance to lead the Longhorns the rest of the way is only peeking out the doggy door.

With 14:51 left in the first half, Balbay made an awkward move to the basket and collapsed. After the game, he left the locker room on crutches with an air cast on his left knee and said the knee "twisted and popped."

It's time to talk football. The Statesman starts their spring football preview with a look at the quarterbacks.

Should we stay or should we go?

Any excuse to hear The Clash.

The Horns could make a big exit.

No matter what happened with the Hogs, the SWC was doomed. With its unique, if highly flammable makeup of big state schools and four small privates as well as eight from one state, what’s remarkable is that it lasted as long as it did.

And the clock is ticking on it, too. Just a matter of Texas.

The Big 10 hired a research firm to look into expansion. The team came up with a list of possible schools and someone didn't make the cut.

It was reported recently that the Big Ten and Texas had begun preliminary discussions about the Longhorns leaving the Big 12 for the Big Ten.

"In our initial study, there wasn't anything on Texas," Alvarez said.

The Big 12 and Texas are rreally, really good for each other.

Dodds said the Big 12 has worked "probably better" than he hoped when he and then-Oklahoma athletic director Donnie Duncan put the league together 15 years ago.

"Geographically, it works. It works politically, and it has to work politically. It works competitively. It’s worked financially.

Mel Kiper has dropped Colt McCoy down his draft board.

"I think [for] Colt McCoy that's a little early," Kiper continued. "I think maybe second round, third round, or fourth round is not out of the question. Dan LeFevour from Central Michigan has moved ahead of McCoy based on my board and some people in the league I talk to. So I think LeFevour might be more viable for the second round right now than McCoy is."

But those same doubters motivate McCoy.

McCoy will use the chip, which has grown since the national title game, to stay motivated through the combine, and then at the Longhorns' pro timing day on March 31, and then the draft itself, which starts April 22.

"If there is a positive from that (national championship) cloud," Dunn said, "that's it."

Colorado could jump ship this summer.

The possibility of Colorado trading the Big 12 for the Pac-10 was the hot-button issue Tuesday during an afternoon roundtable with athletic director Mike Bohn, who said if any move happens, it would likely come this summer.

Bohn was asked about recent comments made by Nebraska athletic director Tom Osborne, who said that he is concerned that "the center of gravity" in the Big 12 is shifting south into Texas. Bohn said he understands how administrators and coaches of north division teams can feel that way in the Big 12.

"I think that mostly has to deal with the fact that the Big 12 Conference has made a commitment for the next several years to explore keeping the championship game for football in Arlington (Texas)," Bohn said. "I think that`s where that comes from."

The Indiana University student paper has some thoughts on Big 12 schools joining the Big 10:

Texas is the lone player that doesn’t have much to gain from joining the Big Ten. As an extremely successful perennial powerhouse in the Big 12, Texas earns the most revenue of any Big 12 school. However, that number could increase significantly if the Longhorns switched conferences. It’s very hard to argue with that $242 million mark.

The entrant must also be able to benefit the conference as a whole. Texas is obviously the best choice to that end, with its top-tier football, men’s basketball, baseball, and ... Well, it’s hard to find a sport the Longhorns don’t have success in.
Academics are also called into play, and the admissions standards for UT are comparable to those of Big Ten institutions. Obviously, Texas would be the best "get" for the conference.

Mizzou is a strong school athletically, but its admissions standards are not as rigorous as those at Big Ten universities, nor does it have nearly as many reputable academic programs. Nebraska, a big football school, is also not as strong on the academic side and has little to offer the conference in terms of its market size when it comes to televised games.

Who will be the most improved football team in 2010?

Dez Bryant has moved on.

"The whole thing wasn't fair but at the same time, I feel like in my mind, I didn't do anything that bad to hurt myself," Bryant said. "That's why I moved forward. I'm not worrying about the situation anymore. I'm just worrying about finally coming to my dream to get to play in the NFL."

Kansas football fans will see some slight changes in the football uniforms starting in the 2010 season.

For the first time since 1981, players' last names will not be on the back of their uniforms. A Jayhawk logo will appear in the location instead.

A word of advice to Austin Box, the Enid High School graduate now playing for the University of Oklahoma football team: It’s time to grow up.

Box, 21, made statewide headlines again over the weekend, and not for his athletic prowess. No, for the second time in a year, he was caught by police urinating in public. 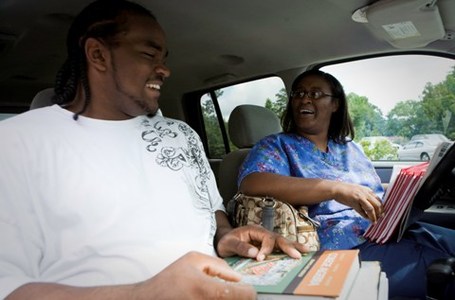 Jamarkus McFarland: Thirty-seven thousand people, and it's all football-based. We've had some great players out of there, like Dez Bryant and Jorvorskie Lane. Over time, we've had some guys get into trouble, too. So all eyes are on me, and what I'm going to do. Am I going to hold up or follow the trend? That was a big part of me coming here. I was looking at Texas and USC, those are big-time cities or the capital city in the state. I thought it would be harder to focus there. But there's not any temptation here from the community. There's nothing big downtown. It's video games and movies. Good, clean fun and lots of work.

The Omaha-World has a Q&A with Cornhusker offensive Coordinator Shawn Watson.

Carl Pelini's job at is changing.

His duties as defensive coordinator are changing and evolving, but Carl Pelini doesn't exactly have a written job description handy to help him explain it.

There will be more responsibility, something Pelini said he has sought since returning to Nebraska to work for his brother, Bo.

The adjustment won't change how NU game-plans and calls defenses. Both Bo and Carl said those processes will continue to be a combined effort of the staff. Because of the prep work involved, Carl said there usually isn't much question as to what's called on a certain down or specific situation in a game.

Reggie Bush doesn't have time for this stuff.

The NCAA's Committee on Infractions is investigating allegations that former USC athletes Reggie Bush and O.J. Mayo received extra benefits for playing for the Trojans. Reporting from Tempe, Ariz., and Vancouver, Canada - Athletic Director Mike Garrett, former football coach Pete Carroll and running backs coach Todd McNair were among the members of a USC contingent that was on the hot seat Thursday in Tempe before the NCAA's Committee on Infractions.

Meantime, former USC tailback Reggie Bush, the focus of many of the allegations that landed USC in the desert for its long-awaited hearing, was at the Winter Olympics in Canada, preparing to take in a hockey game and some ski races.

Not everyone is buying into all the expansion talk.

It's still too early. It will be months before the Big Ten and Pac-10 even solidify IF they will expand, let alone which teams they will expand with. There has been an inordinate amount of speculation regarding whether the interest of those two conferences will have a trickle-down effect on the ACC, but as of right now, that's all it is -- speculation.

Nobody with any clout in any conference has gone on record to address these possibilities, other than officials from the Big Ten and Pac-10 stating they are evaluating expansion. The key word there is "evaluating." The Big Ten said it would take 12 to 18 months to do that, while the Pac-10 estimated six to 12. The ACC isn't ready to comment on what effect it might have on the conference.

Lane Kiffin is the Sarah Palin of the sports world.

The Onion has a list of the top 2011 recruiting prospects. It looks like Notre Dame has found a successor for their boy wonder.

Alex Carson: Quarterback has the talent, makeup, and complete inability to put the two together that will make him the perfect successor for Jimmy Clausen at Notre Dame