Share All sharing options for: Notes From The 2010 NFL Combine, Part 1

So what's it like to cover the NFL Combine as a member of the media? Mostly, a whole lot of sitting around.

The media center at Lucas Oil Stadium in Indianapolis is an expansive room with three main stages, roughly 10 circular tables (where players of lesser media interest sit to visit with reporters), and a dozen long rows of work station tables for the press to set up and work. I was astounded by the sheer volume of media members who descended upon Indianapolis to cover the 2010 Combine. I recognized a handful of them--national guys like Peter King, John Clayton, and Chris Mortensen, as well as a half dozen or so writers who cover the Big XII--but the overwhelming majority were new faces.

I found it interesting that most of the NFL teams themselves now have employed media--guys (and quite a few gals) whose job it is to produce content for the teams' home pages, such as Drew Dougherty, an employee of the Houston Texans I spent a good bit of time visiting with over the past three days. A graduate of SMU, he'd spent the past four years as a sports anchor in Lubbock (he was there, on the field, for The Catch) before being hired by the Texans to produce the content for their website. In the three days I was stationed next to him, he divided his time between producing video, audio, and written stories for HoustonTexans.com.

My own goals for the Combine were... less well defined. I knew I'd be chronicling the experience of the events for SBNation.com, but beyond that, I arrived without a clear sense of what, precisely, I would be aiming to do. In part, that was because neither I nor anyone I talked to before I arrived, had any idea what to expect.

The NFL presents two classes of people to the media for interviewing--team employees and Draft prospects. The team employees rolled across one of the main stages according to a schedule the NFL displayed on a big white board at the media entrance. For example, on Thursday morning 49ers GM Scot McCloughan took the stage at 10:00 a.m. 49ers Head Coach Mike Singletary followed him on the stage at 10:30. Bills Head Coach Chain Gailey went next at 11:00 a.m., and so on.

The players, on the other hand, arrived sporadically, in more or less random order, and you only know that they've been made available when the NFL employee announces their over a loudspeaker. "Now appearing on Stage C, University of Mississippi quarterback Jevan Snead." The upshot of the process is that unless you want to sit and listen to all the GMs and Head Coaches, you spend a whole lot of time parked at your work station, raising your ears every so often when a new player announcement is made. If it's someone you want to visit with, you hustle over to the player's stage or talking table to participate.

Though it makes for an inconvenient system for members of the media, among the dozen or so activities the NFL has each prospect undertake, presenting the players to us is the lowest priority. If it weren't so good for business, they'd assuredly cut the activity from the schedule altogether. As it is, they bring out the players when it's convenient for all the other parties involved, which means there's no point in offering us a schedule that they know they can't keep. The media just has to be patient, and ready to move at any time. It also means we have to make choices, because at times there can be as many as six prospects out on the floor at once.

Once I figured all this out, I revised my expectations accordingly, and decided that after spending Thursday morning with NFL GMs and Head Coaches, the only other coach I'm interested in is the Titans' Jeff Fisher. The rest of my time I'd spend visiting with prospects, and among those, I figured I'd focus the majority of my attention on players from the Big 12.

Thaddeus Lewis, QB Duke:  I loved this guy. Amidst all these monstrous athletes, Lewis was the Jai Lucas of the bunch--listed generously at Duke as 6'1", in reality you have to round up to list him as an even 6'0". What made Lewis awesome was that he knew it. And hey, everything else about his college career was something of an upset, too--four year starter at Duke, culminating in a 5-7 senior season that included consecutive wins over NC State, Maryland and Virginia. He concluded his career with over 10,000 yards passing and 67 touchdowns.

Besides his productive college career, he's got at least two other things going for him. First of all, I noticed he had huge hands and asked him what he measured. He told me 9 5/8 inches, which is big. (By comparison, McCoy's hands are 9 3/8 inches and Bradford's 9 1/2.) Second, he's going to interview well, and if he's a longshot to make any NFL roster, I won't be shocked if someone gives him a late-round Draft flyer to at least bring him to training camp. Still, a great day throwing the ball at the Combine tomorrow is a necessity.

J.D. Walton, C Baylor:  Twenty minutes talking with a player made me like them and begin rooting for them to find success. Zac Robinson? I could have roomed with him in college. Brandon Carter? He's goofy, not crazy, and really easy to like. This proved true over and over again, to varying degrees, with just one exception: J.D. Walton. He came across as something of a nasty character with a bad haircut and perma-chaw cheeks. Listening to him yaw, it's no wonder he lasted about 15 minutes at Arizona State before retreating to small town Texas. Maybe he's a nice guy when you get to know him, but from the media session, he was probably the only guy who rubbed me the wrong way, so I'm rather hoping his NFL career isn't with a team that I like.

Brandon Carter, OT Texas Tech:  When Brandon Carter's name was announced, I momentarily froze as I processed the possibility that when I arrived at the Stage, I might find this staring back at me from the stage: 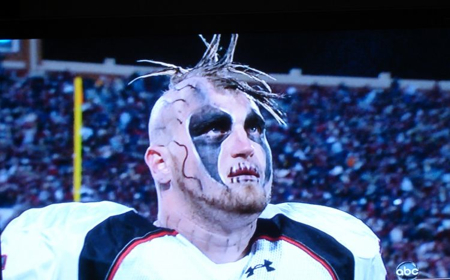 Alas, no such luck, as Carter showed up sporting a full head of short hair and without a drop of mascara to be found anywhere on his face. And when he opened his mouth to speak, Gwar didn't erupt from his vocal chords. He was polite, folksy, and charming--as pleasant as anyone I spoke with in three days. The first question he was asked was about his get-up, and Carter explained that he was done with the face paint and mohawks heading forward.

"Every team has asked about it," Carter admitted. "They think I have a questionable character because of the image they perceived. But once you get to know me, you realize I’m not a headcase. I get pumped up; that’s what every team needs to do."

And in any case, he added, he always grows out his hair out in the offseason--for his Mom. Had he been speaking to anyone other than a group of reporters, someone would have let out an "Awwwww..."

If there was any doubt that he's taking this process seriously, Carter squashed it when asked what he had weighed in at. My jaw dropped when he said: "329 pounds." Down a full 16 from the 345 he played at this season at Texas Tech.

Near the end of his session, after Carter finished talking about the challenges of adjusting from the wide splits of the Air Raid, I realized that no one had asked him anything about Mike Leach, so I jumped in and asked whether he was disappointed with the way that things had ended for the Captain. Forgetting that he was one of the few players who hadn't stepped up to bat for Leach during the drama, I fully expected him to express his disappointment, so his answer surprised me:

"I always liked Coach Leach as a coach," Carter said. "He made questionable calls this year. There was definitely an issue with him. But what happened happened, and I hope he finds somewhere else to coach, because he's a great coach and I know he brings success to programs. I wish him well, and I think eventually, he’ll move on to bigger and better things."