Share All sharing options for: Thoughts About Reed Arena

Like my trip last year to Norman, I wanted to share some brief thoughts over my experience at Reed Arena.  Similar to my trip to OU, it was a simple over-and-back, so I wont be able to provide any crazy stories or extensive road trip notes.  Furthermore, with the exception of one person yelling something unintelligible from a moving car in the parking lot, no one in my group had any issues or negative encounters with any A&M fans.  By and large, it was a pretty uneventful trip, from our perspective.

However, after the jump, I'll be able to offer some thoughts on the arena and how it translated into the overall basketball atmosphere...

As usual, the trip was coordinated by Ryan Clarke from Longhorn Roadtrip.  If you dont know his story--and that he's attended over 140 straight UT basketball games--then you need to head over to his website and educate yourself.  It's simply an incredible story, and, after hearing some of his anecdotes, I can only hope that his exploits are eventually published in a book.  Any discussions over "hardcore" UT Basketball fans should both start and stop with his story.

Due to a wrong turn, we wound up parking in a garage near the stadium about 15 minutes before tipoff.  We quickly scurried towards the arena, which is only slightly more aesthetically pleasing than the much maligned Erwin Center.  Granted, it blends in with the rest of the A&M Campus, but--overall--it's a pretty dreary building. 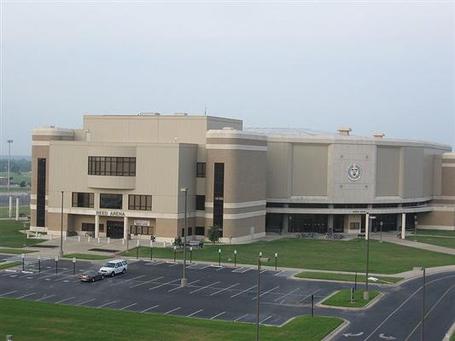 By the time we got there, most people were already inside the arena.  Our seats were easy to find and were seated in the "upper" section of the arena.  To be honest, there isn't even a remotely bad seat in the arena and our seats were really good.  Ryan took a picture from our seats, which he uploaded to his twitter account: 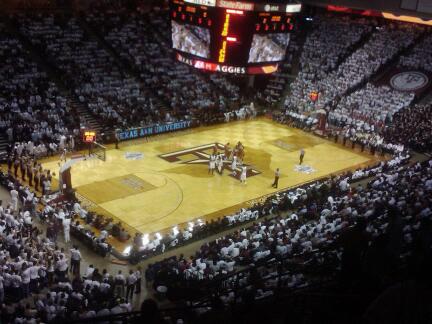 In order to help organize this post, I'll break down everything else into specific categories:

Noise Level: I was expecting the arena to be deafening the entire game.  In fact, one of our travel companions said that she had a headache after her last trip to Reed Arena.  Perhaps it was our seats, but I didnt think it was really all *that* loud.  Ryan said that the noise levels were "several notches below K-State," which he concretely stated was the loudest in the conference.  Make no mistake, the fans erupted at all the right times--especially after the slew of blocks and dunks in the first half--but, based on what I've read about the arena, I was expecting more.  The other person in our group who had never been to Reed Arena expressed similar sentiments about the noise level after the game.

Seating Arrangement: I was also struck by how far away the majority of the fans and students are from the court, especially compared to the Erwin Center.  As you can see from this picture, the concrete walkway surrounding the court presents a sizable buffer between the fans and the court.  On both ends, the A&M students are probably 15-20 feet away from the court.  I'm not well-versed enough in college arenas to know if the Erwin Center is an exception, rather than the rule, but the O-Zone sections are much closer to the court.

Pre-Game Video Package: My memory is a little hazy over this, so forgive me for any minor inaccuracies.  With the exception of the last few seconds, I thought the player intro package was pretty mediocre.  All of the players were shown wearing Scarface/Goodfellas style suits and vests, which was intermixed with highlights from the season.  To be honest, it didnt really make a lot of sense.  The ending--which drew a big reaction--involved one of the players letting out a primal yell and the screen putting up a "Beat Texas" message.  After that, the starters were introduced, and they each had a pre-taped segment of them autographing the camera screen while still wearing their suits and vests.  Once again, it didnt really make a lot of sense.

Dance Team: As you all know, the A&M Cheerleaders are the male "Yell Leaders."  Since they dont have female cheerleaders, A&M had dance teams on both sides of the court.  While the team itself was pretty vanilla--both in looks and moves--I thought it was cool that they had their own video intro package.  Several times, they were introduced by this brief video package, which showed their hottest members doing their hottest moves.  This was much better than them just running out onto the court and starting their dance, which is what we do with our Cheer and Pom Squad.

Classiness of Fanbase: I've already mentioned that we avoided having any confrontations with A&M fans, and we largely flew under the radar of everyone there.  No yelling, taunting, or anything like that.

Most notably, as I'm sure was relayed on TV, the A&M fans absolutely went deathly silent in the fallout of the Brown/Holmes collision.  In fact, whenever someone attempted to yell something, such as "MAKE SURE YOU GET THE RIGHT PERSON ON THE FOUL CALL," they were quickly and resoundly shhh'd, which was also occasionally accompanied by the reminder to "SHOW SOME CLASS."  This silence extended to even personal conversations, and, despite the lengthy delay, the silence continued until J'Covan was taken off the court.  The entire experience left a lasting impression, and, while you may continue hating Kellen Heard, I was really impressed with how the injuries were handled by the fans.

All that said, I really despise the "Left, Right, Left, Right......SIT DOWN" routine.  I think it's incredibly tacky, and I'm glad our fans--with the exception of a few rogue students--avoid performing this ritual.  There's nothing *wrong* with it, but it's just not my cup of tea.

Entertainment/Contests/Etc: This was pretty hum-drum, as well.  The TV timeouts and halftime break involved the traditional shooting contests, races, trivia questions, and performances from the dance team.  Not really anything noteworthy, except for watching Nathan Walkup do an entertaining impression of Peter Griffin from Family Guy.

Conclusion: I liked Reed Arena, and I think it's a heckuva place to watch a basketball game.  I have absolutely no complaints over how I was treated or the efforts of the fans.  They did their part, cheered at the right times, and definitely enjoyed throwing their Horns Down.

However, based on my experience yesterday, I think Reed Arena is probably slightly overrated as a venue.  My expectations might have been too high, but I was expecting a much more hostile and raucous arena for a rivalry game.  I was largely underwhelmed by the production aspects of the game, even though I thought the announcer was really good.

Feel free to post your own comments over Reed Arena below...