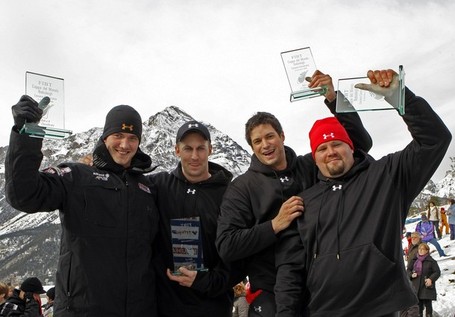 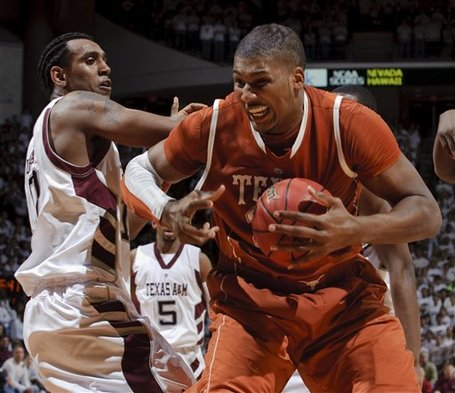 The Horns lost to the Aggies.

The Texas A&M basketball team is quick, resourceful and cohesive.

The 22nd-ranked Aggies used all of those assets on Saturday, outhustling and outrunning No. 21 Texas during a 74-58 victory.

A record crowd in Reed Arena —13,717 —watched the Aggies (20-8 overall, 9-5 Big 12) consistently beat the Longhorns for rebounds, beat them down the court on fast breaks , beat them into a cracked shell of the team that was ranked No. 1 in January.

"I can sit here and try to cover this thing up, but it's my team," Barnes said. "There's no one to blame but me. And it may be as poor a coaching job as I've ever done."

Maybe it is just a slump.

"But we're not obsessed by it because we're obsessed with these guys trying to live their NBA dream," he said. "What's happened to Kevin Durant, LaMarcus Aldridge, T.J. Ford — I'd give up a national title for all our guys to be able to live their dream."

That might be a keen way to pander to the one-and-done recruits, but it does nothing for the fan base or the locker room. It's also silly. Scouts would have found Durant, Aldridge and Ford without Barnes' help.

There are no carbon copies.

Gilbert's just entering his second season on campus and offensive coordinator Greg Davis isn't about to overload his new charge with too much too soon. Make no mistake about: Gilbert will be featured offensive performer by the time it's all said and done, but don't be surprised if you see Texas pound the ball early against their non-conference opponents. Yep, pound it against Rice. Bulldoze it against Louisiana-Monroe.

The zone read is dead for now, and hopefully the zone blocking scheme is dead, too. If Brown is serious about this thing then we will see more two-back formations in non-conference. But when the real games start — UCLA and Texas Tech count — the Horns will only be as good as their quarterback. The big numbers in Gilbert's stat line will come mostly from his golden arm, not from his legs.

Remember those comments by Washington athletic director Steve Woodward about Texas to the PAC 10? Well, forget it.

Talked to Woodward about this and he said he was just speculating with a reporter. He told me he had no inside information, and a Pac-10 official told me there's -- as of yet -- no substantive inside information to try to break out of captivity.

The Ft. Worth Star Telegram has a Big 12 spring football preview.

Oh, Dez. Haven't you learned anything?

Oklahoma State receiver Dez Bryant, who was suspended by the NCAA last season for lying about having dinner with former Dallas Cowboys cornerback Deion Sanders, is excited to be at the NFL Scouting Combine and talking about football again.

Bryant takes full responsibility for what he terms a big mistake. He said he is a good person and that he was simply nervous when he lied to the NCAA because he thought the dinner at Sander's home in Prosper was a violation.

Bryant said he will continue to rely on Sanders' guidance as he prepares for the draft and his rookie season in the NFL.