State of the rivalry: It would be too much to say that Texas fans could be fully satisfied by opponent misery alone (one gets the feeling many Aggies certainly could be) but there's no question that Sooner suffering runs a close second to success of our own. Needless to say, the past year has been about as blissful an experience as is possible for Longhorns fans: Though all the near-missing (national runners-up in baseball, volleyball, and football) stings a bit, not only is Texas fielding nationally elite teams across the board -- racking up conference titles, and enjoying enormous success, generally -- but it's coinciding with a discouragingly difficult spell for the hated Sooners. Call it karma for the bullsh** BCS Title Game berth in 2009, as since then the Sooners:

Baseball: Were eliminated by Missouri from their half of the bracket in the Big 12 baseball tournament, and saw #4 seed Wichita State win the Norman Regional.

Football: Lost Sam Bradford and the game to BYU, lost another to Miami, lost for the fourth time in five years to Texas, were relegated to El Paso by their 7-5 season record, and got thoroughly licked by Texas recruiting the state's top talent.

Basketball: Have thus far been thoroughly mediocre without Blake Griffin, having followed two season-opening wins over nobodies with three consecutive losses -- to Virginia Commonwealth, San Diego, and Houston -- and sit at 12-9 (3-4 in Big 12) heading into Saturday's game versus Texas.

In the realm of Longhorn fandom, this is just about as good as it gets.

Oklahoma Season To Date: The Sooners went 9-5 during non-conference play, losing to UTEP and Gonzaga, in addition to the three I already mentioned. Among their 9 non-con wins, 6 were completely meaningless (Mount St. Mary's, UL-Monroe, Nicholls St., Centenary, and MD-Eastern Shore), and the other 3 were only of limited value -- vs Arkansas (KenPom #102), vs Arizona (#71), at Utah (#117).

Oklahoma tempo-free statistical profile: While the Sooners haven't been very good offensively, they've been an absolute nightmare on defense. 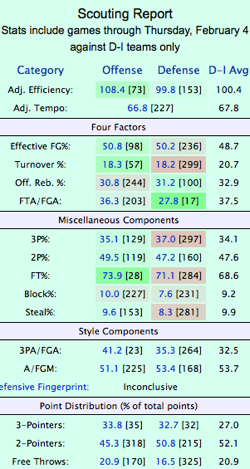 Offense: The most striking aspect of OU's offensive profile is the point distribution, with a full third of the Sooners' points scored coming by way of the three pointer. Not surprisingly, the Sooners have been terrible rebounding their own misses, and despite being a good free throw shooting team do a poor job of earning trips to the stripe. Together, the numbers paint a clear picture: Oklahoma is too often either disinterested in, or incapable of, attacking the paint and settles for gobs of long jump shots. (More on this when we get to the personnel.)

Defense: The numbers are even worse on defense, painting a picture of an OU team that is indifferent towards making things happen on defense, or really incapable, or really passive. They block very few shots, almost never steal the ball, rarely create turnovers of any kind, and allow opponents to shoot a high percentage, both inside and out. Given all that, you'd at least expect the sagging Sooners to be severely limiting opponents' second chances, but they're even mediocre in that regard, too.

Oklahoma personnel: The primary focus of OU's offense is the supremely talented Willie Warren (6-4, 199 lbs), a name Longhorns fans shouldn't have any trouble remembering after his spectacular 27-point performance in Austin a year ago. (With Blake Griffin on the sideline displaying the most confusing symptoms the world has ever seen, Warren took the reins and lit up Texas on 10-of-20 shooting, including 6-12 threes, very nearly enough to lead OU to victory, but for A.J. Abrams' most memorable performance as a Longhorn.) After averaging 14 points an 2 boards a game as a freshman, Warren's upped his season averages to 17 points and 3.5 rebounds, but he's seen his three point percentage plummet to 28.4% on the year, from 37.5% a year ago.

I initially expected to find that dip in shooting percentage to be a reflection of Warren's settling for more threes this year, but discovered the opposite is true: he's only shooting 40% of his shots from downtown this year, down from 50% last year. After which the real explanation became obvious: Blake Griffin. Or more precisely, the defensive attention Blake Griffin regularly drew. Willie Warren was open a lot last year because so few teams dared not double-team Griffin. This year not only are none of Warren's teammates drawing anything like that kind of attention, but the opposition's primary defensive focus is on Warren himself.

Griffin complemented Warren's game by occupying multiple defenders and giving OU a fearsome inside presence. This year, Warren's getting anything but complementary play from OU's other primary offensive weapons. Freshman point guard Tommy Mason-Griffin (5-11, 203 lbs) is the kind of player who can make a crowd at Rucker Park explode; he's a player in the same mold as guys like Sam Cassell and Baron Davis. Except that where they're both a legit 6-3, Mason-Griffin is 5-11 in thick-soled sneakers. Though TMG is shooting the ball exceptionally well (45-101, 44.6% 3PFG on the year), his game isn't producing two point buckets (48-123, 39% 2PFG on the year), isn't getting him to the line (21.4 FTRate and just 48 attempts on the year), and -- most importantly -- isn't complementing Willie Warren well at all. Too much dribbling and too many inadvisable attempts to create for himself, making it easy to see why Oklahoma's playing a lot of one-on-one basketball and shooting long jumpers. If you want to know why Willie Warren's turnover rate is up well over 20% on the season, now you know.

OU's other important freshman name to know is C Tiny Gallon (6-9, 300 lbs), who I really wish played for another team, because he amuses me endlessly and is the kind of player I would probably find myself rooting for. From his name, to his surprising capabilities in the open floor, to his propensity for clumsiness as a post player, Tiny Gallon is a mishmash of contradictions, and it really does amuse me and make me wish he were on a team I don't despise. Suffice to say for now that the college game is still moving too fast for Gallon, and though he's talented enough to be contributing nicely for a freshman, he's clearly a ways off from putting everything together and becoming a difference-maker.

All that said, OU isn't mediocre this year because their freshmen are warted. They're struggling because outside the three players we've discussed and senior Tony Crocker (6-6 199 lbs) the Sooners have absolutely nothing. Freshman guard Steven Pledger (6-4, 221 lbs) mostly hovers around the perimeter and either tries not to get in the way or shoots a three (where he's connecting on just 30.5% of his attempts). Junior Cade Davis would be a solid role player on a deep team that could bring him off the bench for 15 minutes a game; on this OU team he's a one-trick pony playing nearly 30 minutes a game. Worse, he's not that good at his one trick: he's connected on just 34 of the 102 threes he's jacked up this year (33.3%), and he made just 59 of the 185 threes he shot across his freshman and sophomore seasons (31.8%). I'll be honest, if Texas sent this team to the court some year, I'd really struggle to maintain interest, if only to ensure I didn't have to spend so much time writing about how frustrated and disgusted I was with the overall composition and performance of the squad.

Keys to the game: ESPN's College Game Day crew asked a fair question about Saturday's contest: "Is this a trap game for Texas?"

There seem to me three intangibles worth considering: (1) the looming Big Monday showdown with Kansas, (2) the ease with which Oklahoma's mediocre season will make it for Texas to take a win for granted, and (3) the Sooners' home court advantage.

1. Start strong and make Oklahoma earn it. The 'Horns by and large have not been a good first half team this year, a trait that can carry amplified consequences in road games: the crowd remains loud and engaged; the home team enjoys a surge of confidence in their ability to win the game, that they might not so easily muster on the road; the road team must try to get on track in an unfamiliar environment. And so on. There's only so much you can control, so there's no mere willing your way to a good start, but it bears emphasizing the importance of doing those things that you can indeed control, to minimize the chances of a poor start on unfriendly territory. In most instances, "Don't take Oklahoma for granted" isn't something we'd explicitly list as a key to the game, but given those three intangible factors in play, it's certainly worth a mention. Not taking Oklahoma for granted means not looking ahead to Kansas, but even more than that (since it's hard to imagine the team lackadaisically approaching any game in Norman, ever) it means Texas must be sharp in doing the little things that will mean any strong first half for the Sooners is a result of OU playing well -- earning it -- rather than their taking advantage of sloppiness by Texas. Whether it's not falling asleep on Warren and TMG when they're off-ball, or executing offense with purpose to ensure Texas gets the good shot off an advantageous match up (as opposed to, for example, the jumper early in the shot clock), the 'Horns can take some of these intangibles out of play by doing all those little things they're capable of but oftentimes get away from doing, especially on the road.

2. Demonstrate consistent offensive patience. On every single offensive possession today, Texas should be able to get a favorable look. They won't make a bucket every time, but they can get good shots against these Sooners every time. This need not be a repeated effort to get the same great look, from the same player, over and over (e.g. forcing bad passes to a double-teamed, entry-denied Pittman), but can come any number of any ways, via the varying strengths of our differing personnel. It's getting the ball to Pittman in position when OU doesn't defend in a way to deny it. It's running high-low sets with Damion James and/or Gary Johnson, creating spacing, and making the Sooners defend away from the ball. It's putting Jordan Hamilton in a position to succeed, and Jordan Hamilton opening up his outside game by making OU deal with his to-the-rim game. And so on. This is an opportunity for Texas to demonstrate that it's progressing offensively, having arrived at a point where it can systematically take advantage of a favorable defensive match up like this one.

3. Don't let Willie Warren get on track with penetration hoops. Willie Warren is one of those players who can single-handedly ruin your afternoon, even playing on a mediocre team. He can score from anywhere on the court, and if he gets in a groove, he's both capable of and comfortable with playing the role of one-man show. Barnes' instinct may be to put Justin Mason on Warren, but I remind everyone that Mason struggled to keep Warren out of the lane on penetration last year in Austin. Whether it's Mason or someone else, the emphasis must be on keeping Warren from geting things going with his dribble drive, and if our strategy/personnel choice isn't working, we need to change, and quickly. In all likelihood, Rick Barnes is going to have to play a couple guys on Warren over the course of the game, because he does an excellent job of drawing fouls (50.0 FTRate, 6.0 fouls drawn per 40 minutes), so it would be risky to stick Dogus on Warren from the get-go and expect him to give us 30 minutes, should we need them. If Balbay does draw the early assignment, then it becomes especially important that he not pick up one of the cheapie perimeter fouls he draws a time or two per game. 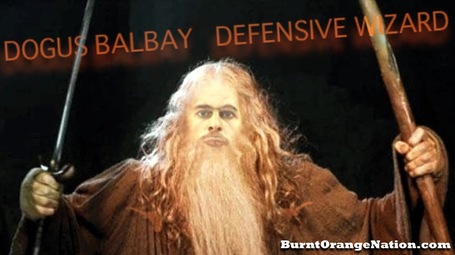