It is up early in case you need something to read during the
commercial breaks in the Super Bowl. Go Saints. 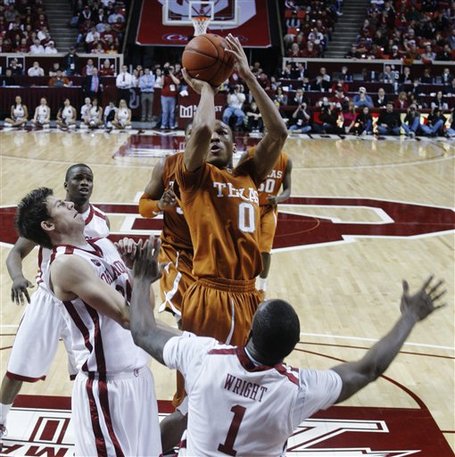 Damn. That's all I want to say about this.

The look in their eyes. The way they shake their heads.

The Longhorn forward knows then that one or two missed free throws by his team might turn into an avalanche.

"I kind of get the feeling that guys are gonna continue to miss them just by the way they carry themselves," Johnson said.

The eyes of Texas are on Chris Whaley.

"Chris Whaley will be interesting to watch this spring," Brown said. "He wasn't ready in the fall. He's definitely one we will watch this spring. We want to see if he can transfer from where he was to where he is now."

Does Texas actually know what to do with a talented running back?

Jeremy Crabtree, Rivals.com's national football recruiting editor, feels that Texas battles the perception it has a quarterback-driven offense when it comes to recruiting for the position.

"I think that hurts them a little bit with the elite running back prospects," he said. "Under Mack Brown, you've heard so much about the quarterbacks with Major Applewhite, Chris Simms, Vince Young and McCoy. The quarterback has been the ringleader for the offense from a perception standpoint and that is sometimes tough when you are selling a running back."

Would have, should have, really doesn't make it any better.

SPRING FOOTBALL!!!!!!!!! A few players will be sitting out this spring. 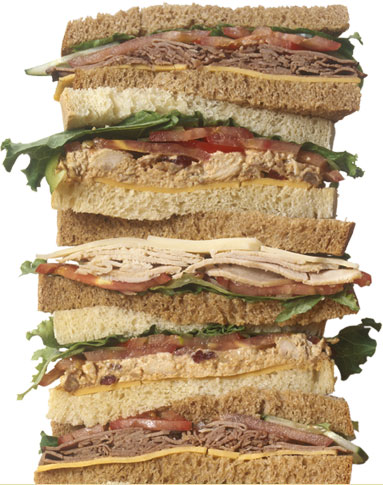 Some people in Ohio just don't get it.

Why would recruit Jordan Hicks leave his home state? I like Texas coach Mack Brown very much, but Jordan, think of the perks (guaranteed future success in any walk of life) you receive when you stay in-state with The Ohio State University. Does Texas really have something different and more attractive? What am I missing? -- Brad Bauer, Short Hills, N.J.

Oklahoma. While Texas got some splashy top-ranked prospects like DE Jackson Jeffcoat and LB Jordan Hicks, Oklahoma might have come up with a stronger overall class. The rumors of Bob Stoops leaving for Notre Dame were untrue and the controversy allowed the coaching staff to show why they’re more committed to Oklahoma than ever. The Sooners loaded up with offensive firepower highlighted by QB Blake Bell and receiver Justin McCay from out of Kansas and WR Kenny Stills from California. But the big move was being able to steal Corey Nelson, a speedy safety/linebacker hybrid out from Texas A&M. Nelson had originally committed to the Aggies, but changed his mind on Signing Day in one of the biggest decommitments of the recruiting season. OU didn’t get Florida’s recruiting class, but it isn’t far off.

It never ends. Texas just signed what some consider one of Mack Brown's best recruiting class and the Statesman is already looking ahead to 2011. Here's a list of the state's top 2011 prospects. One of the names will sound familiar.

The Texas-Baylor baseball game on May 2 will be televised. 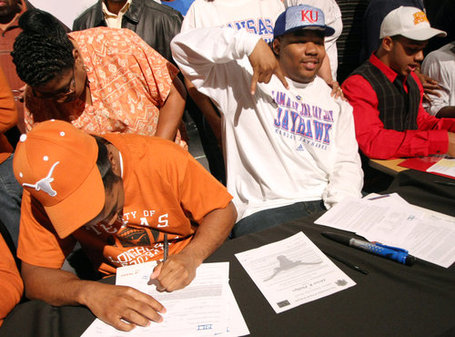 That Jayhawk signee is definitely ready to play in the Big 12. (Ben Torres SPECIAL TO THE AMERICAN-STATESMAN)

Even if a player still possesses supposed intangibles, when recruiting, size is a big determining factor.

"There can be a guy that’s tough as nails, this, that and the other if he’s a linebacker and he’s a certain size, and here comes Phil Loadholt," said Oklahoma coach Bob Stoops. "I don’t care how tough you are, you get overwhelmed. Sometimes, if you don’t have certain measurables, you get overwhelmed. The other intangibles go out the window."

Kenny Stills, a five-star recruit by Scout, was cleared to play for OU.

Coaches with programs in transition mode, such as Texas Tech’s Tommy Tuberville, always find themselves pulling double duty in the film room during a pivotal stretch of the recruiting calendar when peers have honed in on the final handful of prospects they seek to sign.

That’s why Wednesday’s most interesting list of signees came from Tuberville, the only first-year coach in college football who tried to lure recruits to a school that remains locked in a legal battle with its former coach. Not exactly an ideal situation, to be sure. So, how did he do?

"I think he’s done a good job," said Luginbill, who made it clear that Tech’s 25-player haul should not be weighed on the same set of scales as those from Texas or Oklahoma. At least not this year.

Tuberville is all about healing.

The healing process has begun, as Tuberville expected.

Tuberville wasn't oblivious to the reports of lawsuits and rallies backing Leach.

"That stuff doesn't bother me, because I know it will go away," Tuberville said. "If you go in and do your job and sell people on what you're doing and let them know who you are, it will all change."

Texas Tech filed a report with the NCAA over the summer admitting violations of a ban on text-messaging recruits in three sports — football, men's golf and softball.

Tech imposed its own penalties in football that included giving up one scholarship for 2010 and reducing the number of campus visits to four fewer recruits than the program's average over the last four years. "Comparable" sanctions had also been imposed on men's golf and softball. Nearly all the football coaches involved no longer work for Tech since head coach Mike Leach was fired.

Tech and Mike Leach are talking again, but so far, no agreement.

The Cornhuskers have depth. Nebraska is deep on the offensive line.

"I just look at our overall depth chart now and it looks mighty different than when I got here,'' Pelini said. "I'm real happy about that, especially if the guys develop and become the types of players we can help them become. I like the way the roster looks right now.''

Time Magazine has a great article on head injuries in football.

Texas is one of only three states that have really dealt with treatment and prevention of football head injuries.

Texas, with its deep devotion to high school football, is one of only three states with a law dealing with the treatment and prevention of head injuries in high school sports, according to the National Federation of State High School Associations.

Known as Will's Bill, the law was passed less than two years ago after Will Benson died following a football head injury in 2002. The law lays out broad regulations for safety in extracurricular activities in the state's public schools, and it requires all coaches, sponsors and band directors to undergo safety training.

Now, Congress is getting involved. U.S. Representative Ted Poe, R-Humble has some thoughts on that:

"I mean if Congress gets involved, it would be the end of football as we know it.

"We would all be playing touch football out there."

The role and requirements of the modern-day athletic director have changed.

On March 8, David Brandon will become the athletic director at the University of Michigan. He will assume one of the most coveted positions in college sports, and yet Brandon has no experience in the field. He made his name instead in fast food — since 1999, Brandon has been the chief executive of Domino’s Pizza.

Not long ago, the college athletic director’s office was the province of former football coaches whose primary responsibilities included hiring coaches and running the day-to-day business of the department. But as Brandon’s selection shows, athletic directors at major programs are now viewed as chief executives, responsible for overseeing multimillion-dollar budgets, negotiating lucrative licensing deals and raising millions from private donors.

NCAA rules stipulate that programs at the Bowl Championship Series level (formerly Division I-A) can have as many as 85 players on scholarship and can sign as many as 25 in one year.

However, a total of 31 FBS teams - including Iowa State - signed more than the prescribed 25 Wednesday.

"I'm not really good at math," Ferentz said. "I'm still trying to figure out how people sign in the 30s or even in the high 20s. I know there's a reason for it. I haven't read the fine print."

"I always used to tell people that Texas A&M football caused me more stress than any job I've ever had. And they always thought I was exaggerating." - Sec. of Defense Robert Gates