I only descended from the skies about an hour ago so I'm just now sorting through the bracket, but as I begin doing legwork for preview writing here and elsewhere, I went ahead and compiled the Ken Pomeroy rating for each team in the tournament, grouped by regional: 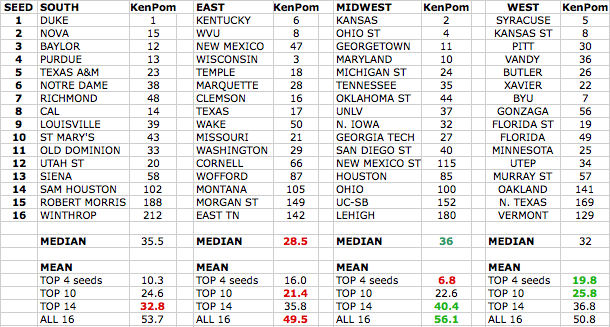 After the jump, a few initial thoughts.

For Texas fans, 2010 as a giant slap in the face continues. Colt goes down, injuries plague the hoops team, Rick Barnes falls on his face, Baylor toys with us like an amused cat... and now this? Look, no one's more aware that Texas has faded -- a lot -- from where they were and appeared to be headed, but an 8 seed in this field is pretty harsh.

With so many falling over themselves to look meager down in the final weeks, resulting in what many think to be the weakest field of 65 in recent memory, it seems clear the Committee decided to disproportionately reward those few teams who got into the tournament with strong play down the stretch. I missed the post-bracket interview with the Committee chair on television, but that's the only thing I can come up with to explain how Texas winds up an 8 while: (A) Oklahoma State nets a slotting on the No. 7 line and (B) Notre Dame winds up a No. 6.

Both are very difficult to understand. Start with the Pokes: Though they went 6-3 over their final 9 games, including a pair of impressive wins at home over Baylor and Kansas -- one of those 3 losses was to Texas. Which of course gave the 'Horns a season sweep over the Cowboys. Not only did Texas sweep OSU and finish ahead of them in the Big 12, but the Longhorns' non-conference strength of schedule (#151) was decidedly better than the Cowboys' pathetic slate (#240). OSU played three KenPom Top 100 team out of conference, losing to #79 Tulsa and #73 Rhode Island, while defeating #99 Stanford. Texas played three KenPom Top 100 squads, picking up wins over #24 Michigan State and #30 Pitt, while losing to #55 Connecticut.

Meanwhile, Notre Dame managed an even more embarrassing non-conference schedule (#261), featuring exactly one contest with a Ken Pom Top 100 team -- a loss, to #77 Northwestern. Worse, the Irish lost to #175 Loyola Marymount. At home! Among their 8 Big East losses were duds against Rutgers and St. John's.

Again, Texas made its own bed, so there's not much sense in losing our minds about this kind of nonsense, but let us call it what it is. For me, personally, I'm just disgusted that the Committee decided to reward two of the most despicable bits of non-conference scheduling imaginable. It creates the wrong incentives, and let me tell you that after three years in South Bend staring at a basketball schedule that could't even get me -- a completely hopeless hoops junkie -- to the Joyce Center, I'm disgusted that Mike Brey got so disproportionately rewarded for finishing strong.

A few quick thoughts on the bracket as a whole: