Everyone has their opinion about why the Horns crashed and burned.

The Longhorns are dysfunctional.

If there are two more dysfunctional teams in America, perhaps they're playing at the downtown Y. But let's not nitpick Wake Forest. After all, the Demon Deacons somehow won a game that both teams tried hard to lose, and thought they had, more than once.

Finally, all involved with Texas basketball can stop pretending. This catastrophic free fall from No. 1 had no magic parachute. Not two months ago and not now. The crash-and-burn is complete, the the reading of the rites was inevitably completed Thursday night in the first round of the NCAA tournament.

The Longhorns were just an illusion.

It's the ranking that gets everyone. That's what they always come back to when discussing this edition of Texas Longhorns basketball: No. 1 to out of the polls. No one had done that in 30 years, so this had to be some kind of disaster, right?

No, not actually. What this was, was an illusion. Texas wasn't the best team in college basketball at any point in this season, and that's so easy to see in retrospect it's like being handed an SAT booklet with all the proper ovals pre-marked.

Barnes and his staff have tried everything with Brown and Hamilton.

"We've got an unbelievable amount of time and effort invested in these kids," one staff member told me, adding that he would hate to see it go to waste for the sake of the players' personal and professional futures.

But it's my guess that in the immediate future both are due for another come-to-Jesus meeting. The message being: Decide if you want to be part of this, or find something else to be a part of it. You don't have to go home, but you can't stay here unless you're all in.

So where do they go from here? What will next year look like?

There are some big questions looming.

Now the question is whether Avery Bradley and Texas' other freshmen players will return next season or leave for the NBA. And if they do come back, what will their roles will be?

Rick Barnes is looking ahead.

Since losing Varez Ward and Dogus Balbay to injury this season, there has been a gaping hole at the point at times. But just because Brown scored 20 points against Wake Forest and shoots 91 percent from the free-throw line doesn't mean he's going to be the main guy next year.

"We are definitely not finished recruiting," Barnes said. "We would like to sign another guard because we lost two players in terms of leadership and toughness during this season. 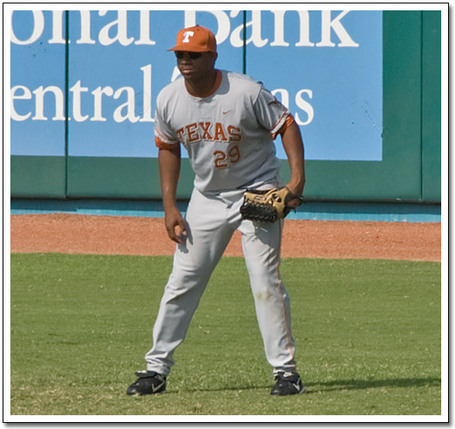 The Cornhuskers took a game from the Horns.

In the fourth inning Texas had runners on second and third with one out. Etier struck out looking. Kevin Keyes struck out swinging. Then, the Longhorn bats went to sleep.

"Obviously we're trying to cut down on the strikeouts," said Keyes, who was 0 for 5, with three strikeouts. "It's one of those things where we just have to keep working at it. We obviously will come here and work on it tomorrow."

Hook Em. The Horns came roaring back with a 13-3 win today.

ESPN's Big 12 blogger David Ubben gets way too much mail from Lincoln.

According to a document obtained by the celebrity gossip Web site, the money was deposited into an account held by Gallon and his mother, Sylvia Wright.

Kansas coach Bill Self knew Northern Iowa would be tough.

Unlike the various well-known prognosticators on TV who had all but handed Kansas this year's national championship, Jayhawks coach Bill Self knew better.

Every time Self looked at the Jayhawks' side of the NCAA Tournament bracket, something was amiss.

Self saw this relatively unknown team Northern Iowa as a possible matchup in the second round, and it became an unsettling feeling.

"When the brackets came out, the first team I looked at was Northern Iowa," Self said. "Lot of people talked about Ohio State or Georgetown or Michigan State or whoever, [or] Maryland in our bracket.

We should all be so brilliant. Dennis Dodd knew the Kansas loss was coming.

The winners. The Bears are headed to the Sweet 16. So is Kansas State. Tech beat Jacksonville in the NIT Tournament.

The losers. Missouri lost to West Virginia and Oklahoma State lost to Georgia.

Bo Pelini doesn't talk about that.

Hunt around the Web and you can find other pre-preseason rankings with NU in the Top 10.

In a separate interview, head coach Bo Pelini said this about the high expectations: "I haven't talked about that, and we won't talk about it."

So, I guess this means the Cornhuskers still don't have a QB? The quarterback job is wide open.

Pelini made it clear the race for the starting quarterback job is wide-open. He also said he deserves at least part of the blame for last season’s struggles on offense.

The Buffs are playing dirty football.

Thursday’s scrimmage marked the unofficial halfway point for Colorado spring football, which will have eight practices left, including April 10’s spring game, when the team reconvenes March 29 after spring break. So far, so good?

"We have to get a lot cleaner," head coach Dan Hawkins said. "Penalties, turnovers, some of that kind of stuff, not dropping the ball. I think the defense has had the upper hand at this point."

There are still eight practices to go in the spring, a summer of offseason drills and conditioning workouts on the horizon, and another month of fall drills to go before Colorado's season opener (Sept. 4 vs. Colorado State, since you asked).

In other words, it's early. Too early to be worried about the details. Too early to start losing sleep over such things as ... well, to be honest, too doggoned early to get worked up over anything concerning college football (unless you live in Nebraska or anywhere south of the Mason-Dixon Line — and if that's the case, my sympathies.)

The Tigers have stuff to sort out in the secondary.

Missouri can afford to be meticulous in letting the safety competition go down to the wire. Whether by coincidence or not, the last time Missouri’s defense wasn’t a liability against most potent passing teams — 2007 — the Tigers had a pair of game-changing safeties patrolling the back end of the defense, William Moore and Pig Brown. Other factors have contributed to more recent struggles against the pass, but MU could use — more like badly craves — a couple dynamic playmakers in the secondary.

Exciting news out of Lubbock: Tommy Tuberville wears a suit and tie to work every day. Now he is ready for football.

Several weeks after Tommy Tuberville’s hiring, word out of the Texas Tech football office was that the Red Raiders’ new head coach had worn a suit and tie to work every day.

Reminded of that when he showed up to do a clinic lecture in jeans and a pullover shirt, Tuberville explained: "This is football.’’

Tuberville was lured to Lubbock.

The lure of the Big 12 and Texas Tech was about more than a fresh start or a new approach -- it was about a particular opportunity. While Leach laid the groundwork and built the program up to national prominence, he may have only been able to take it so far. Tuberville saw an opportunity to move the program forward, and when he first met with his new team, he looked across the room at the players and preached a simple message.

Snyder Ball is back. Dr. Saturday likes the living in Manhattan.

You can spin prodigal head coach Bill Snyder's first year back at Kansas State in any direction you like, depending on which you regard as the season's defining fact: That the Wildcats were still playing for the Big 12 North title in the final game? Or that they missed out on a bowl for the fifth time in six years? It's easy enough to dwell on the negative. Obviously, Snyder's return didn't prompt an immediate revival of the glory years under his watch in the nineties and early aughts, and at times -- an early loss to Louisiana-Lafayette, a 66-14 catastrophe at the hands of Texas Tech -- the whole project looked like an unmitigated disaster.

The Jayhawks are invading Florida.

Don’t look now but the Kansas University football team has made huge advances toward recruiting the state of Florida.

The reason? His name is Robert Wimberly, KU’s assistant coach in charge of safeties, who was born in Miami and has spent a lot of time developing relationships in the state. 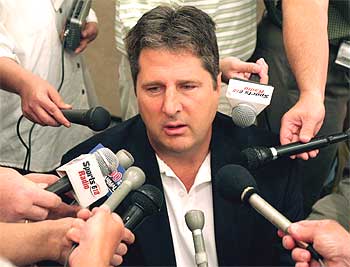 There's just one problem: No one has offered Leach - who is suing Texas Tech for firing him last December - a job.

Thanks, Deion. There are still questions about Dez Bryant's character.

"All of it is just rumors," Bryant said in an interview Thursday with Orlando Alzugaray of WQAM (560-AM). "I don't know why people are saying those things. I feel like if you're going to write something about somebody you need to ask that person instead of writing things like that. I surround myself with positive people. I don't have time to get into trouble. I'm trying to pursue my dream, which is to play in the NFL. ... I never did anything wrong. I never committed a crime.

"It bothers me a lot," he said. "I just had a talk with my advisor and my agent [Wednesday], and I told them that I'm not a bad person and I'm not used to people saying bad things about me. I like to make people smile. I like to bring excitement because that's what I do, and I want to keep it that way. I don't want a bad image. My bad image in my childhood, that is long gone. I've surrounded myself with bright people and I'm going to continue to stay out of trouble and move forward and play in the NFL."

March Madness is a fraud.

Why should the players decide who wins? Where are the computers?

Maybe you’re caught up in this NCAA Tournament. Maybe you’re one of the suckers who thinks this is the best event in sports. You’re obviously not paying attention. College football’s BCS is the way to go, and we know this because it’s what the NCAA tells us.

"I believe (the BCS) is in the best interest of the universities," says Bill Hancock, the nice man from Kansas City with the unenviable task of defending a broken system.

It isn't all good at the tournament.

How seriously does the NCAA take this farce? The handbook given to everyone who works at a tournament site includes this: "Participants should be referred to as 'student-athletes' at all times." Oh, please. Just shut up and let the kids play basketball.

Change is coming and it isn't good.

No matter how much college basketball you watched in December, January, and February (for me, it was somewhere between limited and none), the must-see moments of March will always bring you back to this particular sport.

Yet, now there's a movement under way to destroy that, to dilute it, to totally change the dynamics. This is a movement fueled by what else -- greed.

Something big and brown was lurking around the NCAA tournament.

From an article about CBS coverage of the NCAA tournament:

University of Texas fans probably wish that the local CBS affiliate had blacked out the last few minutes of that overtime loss to Wake Forest. Maybe a grisly screen shot from CSI can go up whenever a Rick Barnes-coached player steps to the free throw line to block viewers from real horror.