#8 Texas Longhorns vs. #25 Rice Owls -- Preview and Some Season Thoughts

Share All sharing options for: #8 Texas Longhorns vs. #25 Rice Owls -- Preview and Some Season Thoughts

[UPDATE: Horns get 3 hits but score 5 runs in a 5-1 victory over Rice. Chance Ruffin goes 3.1 IP giving up only 1 hit for the win. Texas improves to 16-5 and will travel to Lubbock to face Tech this weekend]

On this date last year, the 2009 Texas baseball team lost its 6th game in 21 tries. Today at 6:05 PM, Texas attempts to better it's 2009 start with a win in its 16th game in 21 try. The last two weeks have seen a sizable rise in Texas' team batting average, going from a miserable .246 following last Saturday's double header versus Iowa to a much healthier albeit still low .270 now. Texas may not have the best record in the country, but it has had to face significantly tougher competition than some of the country's premiere teams. Texas has the 10th ranked strength-of-schedule according to Boyds World, playing a significantly more difficult schedule than Arizona State (47th), LSU (90th), Florida (83rd), or Georgia Tech (186th), all of whom are ranked ahead of Texas in the polls.

The pitching got roughed up last week for 13 runs, and a 2-2 week dropped Texas to #8 in at least the Baseball America poll. Nebraska's lefty lineup hit the Longhorns in a way no team in the country has this season, so it's a good thing Texas won't have to face as many talented left-handed hitters many times this season. If the purpose of each weekend is to win every series then the Horns are 4-1 on the year. And a win over Rice tonight would give Texas a 5-1 series record. Of course, Texas followed a victory in the 2009 conference opening series with a loss to Rice and a sweep at the hands of Kansas, so hopefully better things will be in store for the week ahead.

No official word on who'll be starting for the Horns, but you can likely look for Austin Dicharry or Hoby Milner on the mound. After the jump we'll take a little deeper look at what's been happening the first 20 games of the 2010 season. 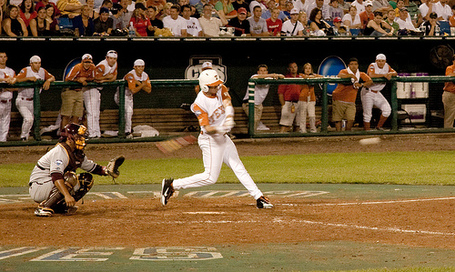 Taylor Jungmann struggled on Friday, if you can call 7.1 IP, 8 Ks, 5 ER to be truly struggling. Jungmann's start on Friday showed his one weak point remains facing lefty hitters. Adam Bailey (7-11), DJ Belfonte (5-11) and Cody Asche (6-12), all lefties, accounted for 18 of Nebraska's 24 hits in the series and all 7 hits on Friday against Jungmann. Cole Green and Brandon Workman continue to provide steady and occasionally brilliant starting pitching performances. Each pitcher threw a "complete game" the last two weekends, ensuring consistency from the starting pitching.

Chance Ruffin has been nails as a closer outside of his first performance against New Mexico. He continues to give Texas the ability to shut down opponents in the late innings of a close game. As far as the rest of the relievers, for now it appears that Stayton Thomas, Austin Dicharry, Hoby Milner and Andrew McKirahan will be the first relievers out of the pen come June, but the Horns will definitely need more relief pitching to make a postseason run.

Continuously great pitching and mediocre hitting have been the story of the 2010 season. The last two Sundays have proven that Texas' offense is capable of putting up a lot of runs at any one time (31 the last two weeks), the key will be replicating that capability more often. We still aren't too concerned about the hitting though. Last year Texas' batting average was better, but OBP and slugging were virtually identical to this season. A higher BA could still lead to an even better offense than in 2009.

Two of last years' starters, Kevin Keyes and Cameron Rupp, appear to be returning to 2009 form after slow starts to 2010. Keyes had a rough series against Nebraska (3-13) but has improved his batting average to .286 on the season. He's the same guy he has always been, an extremely talented player capable of great power and frustrating slumps. Rupp is below his 2009 average, but went 5-13 against Nebraska with a walk-off home run on Friday, hopefully signaling a turnaround to his year. Tant Shepherd went 1-9 on the series against Nebraska but is hitting the ball better this season than he did last year. His .293 batting average is the best among the season's everyday starters. He may not be a great leadoff hitter (more on that in a second), but he provides a solid bat in a lineup desperately need of a few good hitters.

Poor Connor Rowe and Kyle Lusson may not see consistent starting time for the rest of the season because of abysmal starts to their 2010 campaigns. Rowe (.218) and Lusson (.231) have neither hit the ball well nor gotten on base, thus they're relegated to the bench for the time being. Russell Moldenhauer has had a rough start to the season, but a good series against Nebraska (5-10) and a continued propensity to get on base (.474 OBP) make him a valuable commodity. Similarly, Kevin Lusson isn't tearing the cover off the ball with much consistency (.250 BA), but he gets on base (.466 OBP) and is second on the team with 3 home runs. Augieball puts a premium on guys who can get on base and put pressure on the opposing defense. Though Moldenhauer and Ke. Lusson aren't getting a ton of hits, they'll continue to play so long as they're adding to the offensive output.

Then there's the question of what to make of Jordan Etier. He plays a relatively easy defensive position (2B), but the only obvious candidate to replace him would be Tim Maitland, not exactly an offensive upgrade. Etier is hitting an abysmal .235, has struck out as many times as Moldenhauer, Kevin Lusson, and Brandon Loy combined (27 Ks), and doesn't walk a lot (only 6 this season). But Etier does bring some power, leading the team with 4 home runs. He probably isn't going anywhere, but we'd feel a lot more comfortable if he was hitting with at least a little more consistency.

Finally, there are the freshmen. Cohl Walla was the first newbie to see significant playing time and could be the leadoff hitter of the future. He doesn't strike out a ton and is only one of two players on the team with more than one at bat hitting over .300. All Walla lacks is collegiate experience. Time will tell if Walla's start is just a mirage or whether he can be the offensive spark this team needs. Which brings us to...Jonathan Walsh. The freshman catcher/outfielder went 4-10 against Nebraska, lowering his season batting average to .476. Through 6 games he is slugging .810. Those number will almost certainly fall as the season goes on, but he has given the Texas offense a much needed boost. If Walla and Walsh can be solid offensively, then Texas would have a far more difficult lineup to defeat.