Another Sunday, another offensive explosion for the Texas Longhorns baseball team. On a weekend where Texas pitchers faced some pretty big adversity in the form of a howling wind, the Texas hitters proved that they can carry the team. Cohl Walla led the way on Sunday by going 4-6 with 4 runs and 2 RBI from the leadoff spot, and every Texas starter but Jonathan Walsh recorded a hit (Box Score). Texas pitchers weren't perfect, but they were quite good when they needed to be. Chance Ruffin gave up his second earned run on the year, skyrocketing his ERA to 0.68. Brandon Workman (5-0) got the start and the win for the Horns, giving up 2 runs (1 earned) in 5+ innings of work. Hoby Milner gave up 1 unearned run in his 2 innings of work, showing that he may be a reliable arm coming out of the pen going forward. 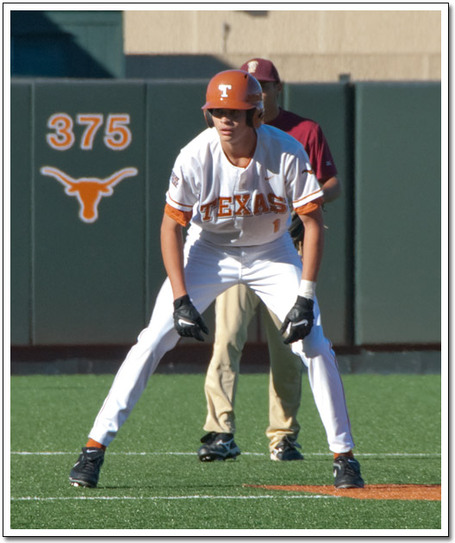 Since bottoming out with a team batting average around .240 during the double header of the Iowa series, Texas has hit a quite impressive .317 and raised the team batting average to .275. Perhaps even more impressively, Texas hit 4 home runs on Sunday to bring the season's total to 26 homers in just 24 games. Last season, Texas hit its 26th homer on May 3rd (source: Texas_Baseball) which would've been the 48th game of the season. This team has power.

Jonathan Walsh has come to earth a bit since his torrent start. The freshman was 1-11 on the series and now stands at .324 for the year. Cohl Walla, on the other hand, continues to swing a hot bat and leads Texas with a .385 batting average. The concern with Walla in the leadoff spot though remains his lack of free passes (only 1 BB on the year). In other hitting news, Russell Moldenhauer has been one of Texas' hottest hitters the last 2 weeks, going 7-15 in his last 4 starts. Moldy brings an experienced bat to the lineup and Texas is better offensively when he is on his game.

Finally, the pitching. Taylor Jungmann had a disastrous night on Friday, now let us never mention it again. The team ERA rose this weekend to 2.77 thanks to the wind blowing strongly out, but fortunately the Horns won't have to return to Dan Law Field until 2012. Perhaps the most important development for the pitchers this weekend was the total absence of Austin Dicharry. The sophomore did not pitch and it would appear that the group of Andrew McKirahan, Stayton Thomas and Hoby Milner will be the first pitchers out of the bullpen. Hopefully Dicharry can regain some of his moxie in midweek appearances and be ready to contribute in the postseason.

Texas takes on Oral Roberts in Austin on Tuesday at 6:05 PM before traveling to Oklahoma for a matchup with OU. The trip to Norman will be Texas' first time outside of the state since Omaha.