[UPDATE: Another close win over Kansas today, this time 3-1 behind a very strong start from Cole Green (7 IP, 1 ER), a Tant Shepherd home run and two manufactured runs. Texas improves to 9-2 in the conference and goes for the sweep tomorrow at 1 PM]

It was a thriller at UFCUDFF on Friday night. Taylor Jungmann pitched well (7 IP, 2 ER), and Chance Ruffin kept the Horns alive through several tight spots (3.1 IP, 0 ER). Texas had several near misses that would've ended the game favorably, notably a Russell Moldenhauer double that was two feet from a home run and two strikeouts with the bases loaded in the ninth.

But, as the Bard would say, all's well that ends well. Jordan Weymouth hit a pinch hit triple in the 11th, Kevin Lusson walked, and Tim Maitland stayed hitless with a sacrifice fly to right that plated the winning run. The 3-2 win snapped a four game regular season losing streak to the Jayhawks and moved Texas to 24-7 (8-2). 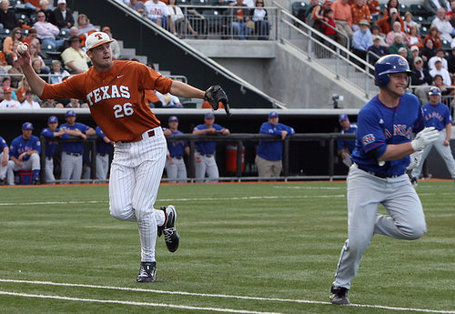 A couple of thoughts from last night's game after the jump.

First, remember last year when Texas started putting pinch runners and late game defensive replacements for guys like Russell Moldenhauer and Kevin Keyes in order to win a tight game in regulation? The result was an impotent offense which often fizzled down the stretch. This year, guys like Jonathan Walsh, Paul Montalbano and Jordan Weymouth waiting for key PH at bats can seemingly prevent that from happening. Weymouth may have earned more playing time with his second huge Big XII pinch hit, the key for Augie will be to find where.

Second, Augie wanted this win. Jungmann pitched great again with little offensive support, and then Chance Ruffin came in down 2-0 and threw more than 50 pitches. You don't put your closer in late in a game when you're trailing unless you think it's important. Ruffin pitched great, and Texas got the win.

Third, Hoby Freaking Milner has graduated from midweek ace to legit bullpen addition. He only threw five pitches last night, but he is becoming even more trusted than Stayton Thomas to go out and put out a fire during the first game of a series. Hopefully the Friday night win sets the tone for solid performances Saturday and Sunday.

Finally, a quiz from our soap box. Which player is having a better season?

If you're Baseball America, it's Player 2. If you're anyone else then you realize that as good of a season as Texas A&M closer John Stilson (Player 2) is having, he's doesn't deserve Midseason All-America honors over Chance Ruffin (Player 1). Sure, we're homers, but there's not a player in the country having a finer season on the mound than Chance Ruffin, and it's a shame for the Texas pitcher to not get the recognition he deserves from the national media again.