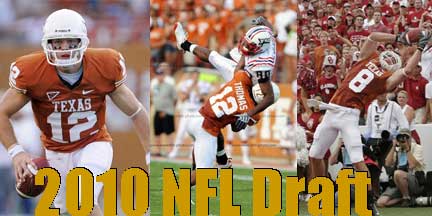 While the first day of the NFL draft was a strongly positive one for former Oklahoma Sooner players, who constituted three of the top four players selected overall, it was not as overwhelmingly positive for the Longhorns.

Earl Thomas went 14th to the Seattle Seahawks, a notable choice for Pete Carroll because the former USC coach passed over Taylor Mays, his former player, and right about where most mock drafts slotted the versatile defensive back.

The major news of the day was the falling stock of DE/OLB Sergio Kindle. Expected to be a mid- or late-first round pick, Kindle slid out of the first round entirely amid rumors of concerns about his knee and a variety of other questions regarding his medical conditions and past behavior. How far will Kindle fall?

For Colt McCoy, the only major surprise of the day was that Tim Tebow went ahead of him in the first round. Most draft analysts have McCoy going early in the second round, possibly to Cleveland with their pick, but few probably expected the former Heisman winner Tebow to go so early -- it's far from a guarantee that Tebow even has what it takes to say at the quarterback position as a professional.

Lamarr Houston is the third Longhorn expected to have his name called on the second day of the draft and could end up being the first Texas player selected this evening. The former defensive end's stock has risen since strong performances at the Combine and the Texas Pro Day.