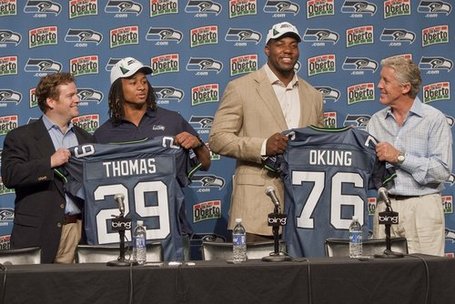 Earl Thomas plans on doing some great things with his money.

Less than five years ago, Earl Thomas, his brother and parents lived for a year in one room in a Motel 6 after Hurricane Rita tore through Orange, Texas, and destroyed their home.

As of Thursday, moving on up to a more luxurious lifestyle shouldn’t be a problem for the Thomas family.

Thomas is familiar with the Seahawks' other first-round pick.

"We met each other a couple times," the soft-spoken Thomas said. "It's a funny story. We played each other. I ran into him."

"I tried to blitz and he caught me up under my shoulder pads and we talked and I told him to please not throw me on the ground," Thomas said. "He didn't ... and that's how we first met. I'm glad he's on my team now."

Colt McCoy was a bargain.

He had to wait until the third round to find a team, but McCoy can now use that experience as added motivation. For all the knocks about his lack of arm strength, he has great leadership ability and a long history as a winner. He'll fit in well with the West Coast offense. He won't be daunted by the possibility of playing early (since he started at Texas as a freshman). And he'll have a better chance to win over Browns fans now that he's not coming to town with a $20 million bonus in his bank account.

Greg Davis believes McCoy will succeed at the next level.

"He certainly is a strong character person," Davis said. "I think that will translate very easily into the same kind of young man into pro football. His intangibles are off the charts from the way he conducts himself off the football field to the way he prepares himself in the classroom. He's as strong a leader as we have ever had here and as I've ever been around, and we've been around some great ones. He has a burning desire, a passion if you will, to be the best that he can be. ...

"There's no doubt in my mind that he'll be an outstanding professional." 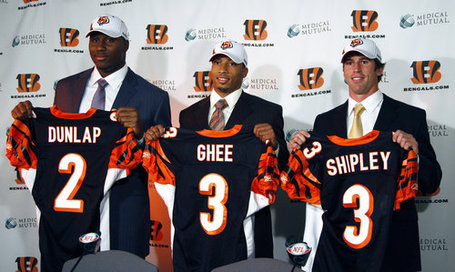 Jordan Shipley will be able to hold bragging rights over his roomie forever after getting pick one spot ahead of McCoy. Another former classmate, Quan Cosby, was thrilled to see Shipley join him with the Bengals, but you can’t help but wonder if the two are competing for the same job. Hope that’s not the case.

Some teams were scared off by Kindle's often-injured knee. Others were worried about his brushes with the law. As far as him fitting in with the Ravens' defense, there are no questions.

It takes only a few minutes of talking with Kindle to realize he already has the Ravens' swagger.

Because they're the Raiders, you see. I'm at Radio City Music Hall, and when the P.A. announced "The Oakland Raiders pass at number 42," everybody got the joke. Of course they're the only team to let the draft clock run down to zero. It's the Raiders, stupid!

The Texas Longhorns committed Cedric Reed, our 20th recruit. With 10 months to spare. I hate when Mack Brown leaves things to the last moment. Will Muschamp’s domination of heavyweight defensive recruiting since his arrival in Austin has been total. He’s sporting a Rocky Marciano record and facing a slate full of tomato cans. 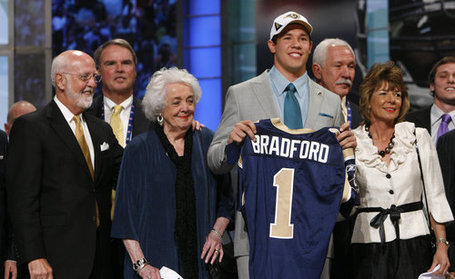 The Big 12 stole the show at this year's NFL Draft.

The draft definitely had a Sooner feel to it.

"What about all the naysayers now?" inquired Bob Stoops.

Oklahoma's coach had good reason to gloat. After all, it was only 16 months ago he was being labeled Bob Stupid and Bob Selfish.

The name-callers weren't limited to Texas or Oklahoma State fans this time. Stoops was being skewered nationally after four Sooners announced they would return for the 2009 season instead of leaving early for the NFL draft.

The Jayhawk offensive line is one of the strengths going into the 2010 season.

Entering spring ball, it appeared that the offensive line would be a potential area of strength for the Jayhawks with all the key players back in the fold. Gill said that their experience and familiarity with one another have eased the transition. Thorson said that, as of Monday, KU’s first-team line would be sophomore Tanner Hawkinson at left tackle, senior Sal Capra at left guard, junior Jeremiah Hatch at center, sophomore Trevor Marrongelli at right guard and Thorson at right tackle.

The Wildcats are still searching for consistency this spring.

During his second year back on the sidelines, Snyder wants to see consistent effort from his players. He says they still aren’t where he wants them to be but admitted to seeing improvement during the last week.

It is Blaine Gabbert's turn.

The star players came out for Missouri’s Black and Gold spring scrimmage — most of them wearing neither black nor gold but jeans and T-shirts. As fans spilled onto Faurot Field for autographs after the scrimmage, former Tigers Sean Weatherspoon, Jeremy Maclin, Martin Rucker and Chase Daniel were swarmed, while most of the guys in uniforms walked through the crowd unnoticed.

Except for Blaine Gabbert, perhaps the 2010 Tigers’ closest thing to an identifiable star. Kids half his size gathered around the 6-foot-5 junior quarterback, the centerpiece to Missouri’s offense who proved his right ankle has fully healed from last year’s sprain as he galloped for a 20-yard scramble that could have been a 50-yard touchdown run.

No one is laughing now.

In recent years, sports fans outside the Upper Midwest have had their fun with the Big Ten Conference, mocking the league for its plodding football and basketball teams, groaning at the thought of a BCS National Championship Game involving Ohio State and taking perverse delight in the collapse of a proud Michigan football program.

The image of the Big Ten was as uptight as Jim Tressel’s sweater vest and as outdated as Joe Paterno’s Coke-bottle glasses and high-water pants. But the guy running the show, Commissioner Jim Delany, wasn’t living in the past. He was busy outthinking his counterparts around the nation. By seeing the possibilities of the Big Ten Network as an enormous revenue-generator, he positioned his conference as the most desirable club in college athletics.

"I love the Big 12," he said Friday. "But there are issues, no question. The TV package (without revenue sharing), that is staggering. ... It's the right thing to do; it makes your league stronger.

"And for some reason, there are people in our league who can't figure that out. And so that's a problem."

It may come down to Texas.

Big Ten expansion could set in motion dominoes that could alter or break up conferences. Once again, Texas and Oklahoma could be main players. If the Big Ten expansion is big enough and broad enough, Texas has another tough decision to make. The offer probably wouldn't be from the Pac-10, but from the SEC.

If the Big Ten goes to 16 teams, the SEC would at least be threatened in the marketplace. In such a case, would SEC commissioner Mike Slive's first call be to Texas?

The future, according to Dennis Dodd. And a few things to watch for.

The end of college football as we know it, that is. The game pretty much moved along at a slow, languid pace for 129 years until the BCS came along in 1998. Twelve years later we stand on the brink of the first super conference, 16 teams spanning half the country and raking in billions in revenue.

No one is saying that out loud, but if you read between the rhetoric here this week, something big is coming. While little was decided, it's clear the game is about to change. We learned that the Big Ten is going to take its time in expanding. We also learned that the SEC is not going to sit idly by and let the Big Ten take over.

We learned that the Big East is not dead as a football conference. At least not yet. We also learned the Big 12 is confident about its position.

What will 2 million dollars buy for Nebraska?

Ndamukong Suh has some ideas that come along with his prodigious donation to the Nebraska athletic department.

Among them: a designated agility area inside Nebraska’s weight room and TV monitors at each stall in the football locker room.

There will be a bowl game in the Cotton Bowl in Fair Park.

The city was searching for college football games to be played in Fair Park with the impending exit of the AT&T Cotton Bowl Classic. And Starr had four decades of bowl experience and an idea.

Everything finally came together when the Dallas Football Classic took the last official step Friday toward a Jan. 1 debut. The startup bowl received official certification from the NCAA's football issues committee.

The debut game will feature a Big Ten team facing a representative from the Big 12, which will alternate with Conference USA.

The BCS releases the secrets to the kingdom.

The Bowl Championship Series released its formula for determining how conferences, such as the Mountain West, can earn an automatic bid to the big-money bowls.