Offseason Ruminations - Quickness versus Speed in the Texas Wide Receivers

Share All sharing options for: Offseason Ruminations - Quickness versus Speed in the Texas Wide Receivers

It's officially the off-season, and just like any good steer, Longhorn fans are left to wander off to the shade and ruminate on things that were and things the might yet be. In the interest of making the first belch, I thought I would visit the issue of the new offense and Texas' current crop of frustrating wide receivers. 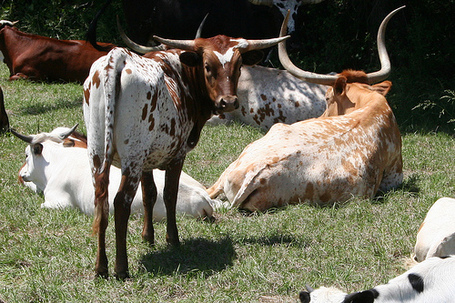 via farm4.static.flickr.com - There's nothing like an off-season rumination party for Longhorn fans

The story begins back In 2008 (seems like a long time ago already), the Texas Longhorns produced their own lethal version of the spread offense built on the short-intermediate passing accuracy of Colt McCoy and the football IQ and sticky hands of two of the Horns' most prolific receivers in history: Quan Cosby and Jordan Shipley. In 2008 they became the first pair of wide receivers to surpass 1000 yards receiving in the same season, and they helped Colt McCoy to a single-season NCAA record for pass completion percentage. This flood of success was based on something called the "two-man passing game," (for more details, see Chris Brown's pre-season article from his ‘Smart Football' blog) in which McCoy and his receivers would read the defense, and the receivers would choose the "option" of different possible routes that would best exploit the coverage and force defenders to leave someone open. With McCoy, Cosby, Shipley, and as the season wore on, Brandon Collins, on the same page in reading the defense on virtually every play, the Longhorns sliced and diced opponents like ripe mangoes most of the year, culminating in the impromptu go route by Cosby against the blitzing Buckeyes to which Colt delivered a perfect zinger with just 16 seconds left to win the Fiesta Bowl. 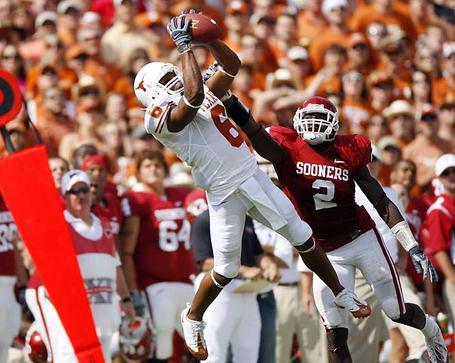 via i.cdn.turner.com - No current starting Texas receiver has anything close to the hands and quickness of Quan Cosby, shown here making a tough catch in the 2008 Red River Rivalry.

Both Cosby and Shipley found success in 2008 by routinely beating safeties and linebackers to spots with their quickness. Once frustrated defenders began anticipating which "options" Texas receivers would choose and jumping routes, Cosby and Shipley would bait the defenders into jumping the simple inside or outside cuts of the normal routes and then, with what's called a double move, quickly cut opposite to the direction of the closing defender into open spaces for big gains and touchdowns. Perhaps Shipley's finest game was the Masumoto knife-filleting of Oklahoma in which he beat linebackers and safeties to a spot on several consecutive plays, and then burned them for a big play on a double move. Shipley further became "the man" in 2009 with his signature crossing routes and more double moves.

The result? Without a doubt, the most effective passing offense in the history of UT.

But wait, this article is about ruminating, not remembering, and so you ask, "Why bring up Cosby and Shipley at all?" The answer is, because Texas' new "downhill, under center" offense may be as much about featuring its stable of wide receivers as it is about getting one of the posse of running backs going. More specifically, the peculiar athletic skills of Cosby and Shipley - not overwhelming straight line speed, but instead scintillating quickness and ridiculously good hands - are missing from the receivers left behind. Their skill set, in the form of the legs of James Kirkendoll, Malcolm Williams, John Chiles, and Marquise Goodwin, is mostly about straight line speed and not so much about quickness.

Speed...quickness...what's the difference? After the jump, I explore the consequences of one versus the other and how this will impact the Horns' offense in 2010.

Fans undoubtedly were frustrated in 2009 at the occasionally sputtering offense, particularly in games against Oklahoma and Nebraska, in which seeming waves of defensive backs jumped the favorite short routes of the "two-man" game, leaving McCoy as the piñata for Gerald McCoy, Jeremy Beal, and Ndamukong Suh's personal backfield birthday parties. The blogosphere lit up with the question, "What's wrong with Colt?" A better question would have been, what's wrong with the UT receivers?

The two-man game depends on receivers making very quick, well-timed cuts into open areas between defensive backs and linebackers. In 2008, this scheme was difficult to stop because Texas' 3 top receivers were quicker rather than faster, and defenders couldn't focus on just one receiver. As far as speed goes, think about how disappointed fans were in Cosby and Shipley's 40 yard dash times (4.65 seconds for each of them) at the NFL combine, but think how many times each would juke defenders into more awkward positions than the game of Twister.

In 2009, the starters were Shipley, Williams, Chiles, Kirkendoll, and later in the season Marquise Goodwin. Defenses focused on Shipley, and for OU and NU, had the athletes that could stay with Williams, Chiles, and Kirkendoll in the short passing game. Why? Those three are fast, but not exceptionally quick. The "Man Child" Malcolm Williams is 6'3", 225 and has a quick first step and tremendous speed for a man his size, but I've never seen him make a quick cut like Shipley, and he has trouble finding the ball when it's thrown before his break. John "the Child" Chiles, even as a QB, never showed much in the way of potential break-dancing moves, and, except against the glacier-footed Wyoming Cowboys and UTEP Miners, was rarely able to get separation from defenders all season. Similarly, "Captain Kirk" Kirkendoll looked great against some inferior teams, but was virtually shut down by the more athletic secondaries of OU and Nebraska. Even Marquise Goodwin struggled in breaking off crossing and slant routes. Couple the inability to separate with the viral pass-catching disease known as "manos de piedra" (hands of stone), and the signature two-man game of 2008 dissolved into a "just throw it to Jordan" game that still almost won a national championship. 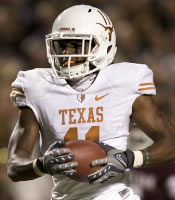 via www.nationalchamps.net - A rare sight against the best teams on the Longhorns' 2009 schedule: James Kirkendoll with the ball.

Faced with a quartet of blazing fast but mostly wiggle-less receivers, it seems that Greg Davis, armed with his new toy, the amazing Garrett Gilbert, has shifted his offensive philosophy away from a spread formation and short passing game into a play-action centered intermediate - vertical passing game. This accomplishes several things. First, Gilbert has relatively fewer reads, i.e., pass plays, to make, which presumably will help him minimize mistakes. Second, the vertical threat on either side of the field in the form of Goodwin, Chiles, and/or Williams, along with the ability of Gilbert to deliver high velocity balls and hit go routes or skinny posts between the corners and safeties, should keep two safeties back without having to deploy four wide receivers. Instead, the EBS (aka Greg Smith) and/or Barrett Matthews can exploit good blocking angles and/or potential double teams along the line without a safety being able to fill the holes. Coupled with a deeper set-up in the backfield, all these changes should help the running game. But perhaps as much as anything else, the new offense allows the Texas receivers to exploit what they do best, which is flat out run and see the ball before they catch it, rather than what they don't, which is to try to make clumsy slow cuts and quick snatches of the ball in a timed passing game.

This is not to say that Texas can't go to the spread if they need to. In the spring game, DeSean Hales showed why he was such a dynamic player in high school, as he repeatedly turned short release routes into catches and first downs. The true freshman Mike Davis also seems to have that explosive quickness, and he may very well work his way into some spread packages by mid-season. Although it may require substitution and thus prevent employment in a jet tempo or hurry-up offense, the Horns have considerable flexibility in their deployment of receivers that could keep defenders off balance. Barrett Matthews may be a key to this flexibility, as he seems to have enough speed to be effective as a flex TE, and enough toughness and bulk to serve as a regular TE or H-back. If so, Texas could quickly shift from 1 back 2 TE, 2 back 1 TE to 4 WR sets, with Gilbert under center or in the spread as needed. We already know that Gilbert is comfortable throwing the football in either formation, and this flexibility allows Texas to use relatively few but very different formations (another Greg Davis trademark) and even incorporate motion before the snap (Matthews as H-back). 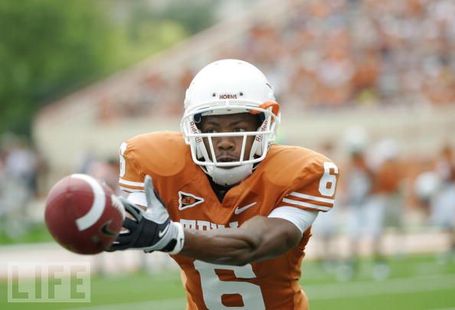 via cache2.asset-cache.net He's got the right number - can DeSean Hales deliver Cosbyesque performances in 2010 with his tremendous quickness?

Regardless, Greg Davis appears to see what he has, rather than what he wants to see, at the wide receiver position. By switching to more pro-style sets, he places the likely starting receivers in a much better position to excel. Obviously the success of this plan hinges on the success of the running game - play-action and vertical routes don't mean much on 3rd and 11. If the running game fails, at least from a consistency standpoint, yet again this year, look for Mike Davis and DeSean Hales to begin to replace "Captain Kirk" and "the Child" in the spread on the basis of their superior quickness in running option routes and the "two-man game."

Texas has not succeeded in having more than one offensive identity in a season during the Mack Brown era, and frankly has struggled to run the ball efficiently and consistently since Ricky Williams left (with the exception of Cedric Benson's senior year (2004) when defenses were forced to devote extra defenders to Vince Young). The switch to a power running - playaction passing game all sounds great and seems to mesh with Texas' current talent, but it remains to be seen whether such an offense becomes the team's identity or whether they end up regressing to a spread offensive team by the end of the year.