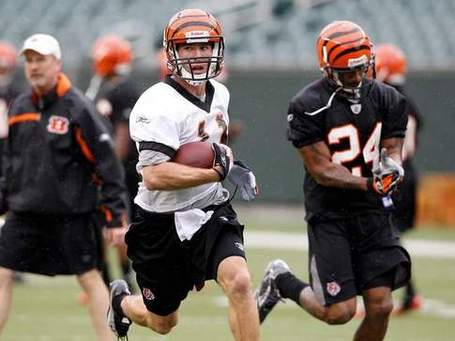 Mack Brown couldn't be prouder of his two boys.

One week after seeing six of his players selected in the NFL Draft and after being a part of NFL Network's coverage, the University of Texas coach was still beaming over the Bengals' selections of Shipley in the third round and linebacker Roddrick Muckelroy in the fourth.

"They're both such good kids," said Brown of both players during a phone interview on Saturday. "They're fun to watch. The good thing about them is that they never get down. They don't have bad days."

Roddrick Muckelroy already had the Cincinnati Bengals' attention when one of their coaches took him aside for a short get-to-know-you chat at the scouting combine.

Basically, he talked his way into the Bengals' draft plans.

They have some learnin' to do in Cleveland.

ESPN analyst Jon Gruden told Colt McCoy he would have to lose his drawl for his teammates to understand him in the huddle.

But even before the Browns drafted him with the 85th overall pick in the third round, the University of Texas quarterback had learned to play along with the folksy cowboy theme.

''Just joking around with coach Mangini I told him we rode horses to school and tied 'em up in the front of the parking lot,'' McCoy said. ''He liked that a little bit.''

Some are easily insulted. Jordan Shipley is not socially connected.

Chad Ochocinco was insulted when the Cincinnati Bengals’ newest receiver — former Horns star Jordan Shipley — didn’t respond to his congratulatory tweet on draft day, according to an Associated Press report.

The receiver from Texas was drafted by the Bengals in the third round last week. Ochocinco immediately tweeted congratulations to what appeared to be Shipley’s Twitter account, the one that used his name and longhorn cattle as the background.

So just who is Big 12 commish Dan Beebe? Teddy Roosevelt or Nero?

"These are interesting times," Osborne said on the radio show. "I think fans are a little bit nervous. All I can tell fans right now is don’t think for one minute that we’re asleep at the switch, that we’re just sitting here waiting for something to happen to us.

"It’s much better to be proactive than reactive. I don’t think I’m free to say much more than that. We are very aware. We don’t plan to get left at the gate, although we could be. I just don’t know what’s going to happen in this environment."

If the SEC wants to expand, they need to hook the Horns. And the Aggies. And, unfortunately, the Land Thieves.

The best way for the SEC to add audience would be to invade the state of Texas. A lot of folks think the Big 12 will start to crumble if the Big 10 takes several of its northern teams, and the University of Texas is the jewel everyone wants. Texas in the Big 10 (as rumored early this year) is a bad fit, and while some think the Longhorns might go to the PAC 10, the SEC seems like a much more natural home for them.

The conference needs to fill some voids.

The league is left with a star void. And the conference, which just finished spring drills, doesn't have immediate candidates to be the faces of the league.

The Raiders have moved on.

Baron Batch: I think what Tuberville brings he brings a lot of discipline with everything-classes and whatever you do. There are no hats or earrings in the building.  He brings that respect factor and he also great with the players. He’s always around and you can always talk to him. He’s just an awesome guy.

Not much going on in Nebraska these days. Corn Nation is posting recipes.

New rule. The NCAA limits to two the number of assistant coaches that can "evaluate" a prospective student-athlete at any one time.

Mirror, mirror on the wall, who is the most diverse of them all?

The most diversified offense in college football in the past decade belonged to - drum roll, please - Oregon State.

Big 10 expansion could be stalled.

Let's say the Big Ten doesn't have all the leverage in expansion.

Let's say that if the Big Ten gets too big, too quick it could be met with a crippling retaliatory strike from the SEC. Let's say that strike could vault the SEC past the Big Ten in the current revenue pecking order.

That's what this is all about in the first place -- the Big Ten pumping $22 million per year to its teams and keeping the SEC in second place ($17 million per team). If the Big Ten senses that it could lose its position in the marketplace then expansion could be off, or extremely limited.

The SEC commissioner was speaking to the Southeast Region meeting of the Associated Press Sports Editors, but he also addressed a very different audience far outside that room.

This is what Slive said, in part, on the increasing chatter about conference expansion and realignment:

"We’re not going to allow ourselves in any way, shape or form to be anything less than what we are now."

Allow me to translate.

UTEP dreams of the Big 12 South.

The four-part look at a looming conference realignment concludes with a fanciful mock-up of what the landscape could look like in a half-decade or so.

In it, UTEP had joined the big leagues. The Miners are in a re-tooled, eight-team "Big 12 South" that includes, um, Rice, Houston, Tulane, SMU and Tulsa (TCU and New Mexico are the other two schools in the Southern Division of the 16-team league).

This may come as a shock, but not all bowl games are approved.

The reality of head injuries.