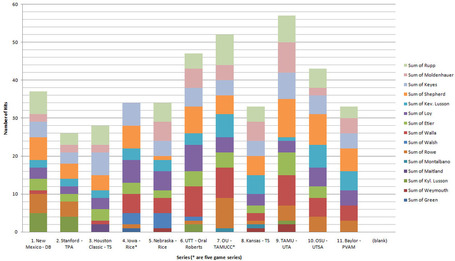 For a not-so Midweek Report, I attempted to make a graph to show how our homerun output has fluctuated over the course of the season. I soon realized, after entering data for the first two series, that it would be much more telling if the chart demonstrated individual hits by series. As hits only give you a glimpse of a batter’s performance, this graph should be taken as a limited representation of production. It does, however, give you a rough sense of how players have triumphed or fallen out of Garrido's and the Baseball God's favor over the course of the season. For example, you can see Walla start off slowly before really taking off in the fourth series. At the same time, you can see Kyle Lusson start to fall off the chart.

There are a couple things worth mentioning. First, I included Tuesday games with the series they immediately followed. The Iowa-Rice and OU-TAMUCC series are five games instead of the usual four, so there’s some relative inflation there. The blank column exists because it will be easier to insert Kansas after this weekend that way. The graph shows that as we approach tournament season, we are relying on a more select group of players. Substitutions have become rarer as the season progresses. I’ll see what conclusions, if any, y'all can pull from this graph in the comments.

Off the field, Jungman and Moldenhauer were awarded First-Team Academic All-District. Austin Dicharry received a second-team nod. In case you were wondering, Jungman's GPA is 1.03 points higher than his ERA.