Share All sharing options for: Conference Realignment: Will Texas A&M Play The Sucker?

The hottest question of the hour is whether Texas A&M might break ranks with Texas and venture off on its own to the SEC. Over at AOL's Fanhouse, Clay Travis (a diehard Vol fan) lays out the argument for why it's a great idea, and as far as benefiting the SEC is concerned, he's absolutely correct. They'd get Texas TV sets, an inroad to East Texas recruiting, and a football-obsessed university with a respectable enough program.

But would the move be a good one for Texas A&M? Absolutely not, but just as SEC fans should hope the Aggies are dumb enough to take the bait... so should Texas. 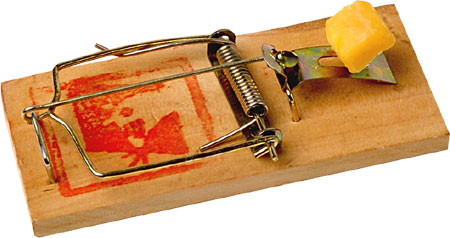 You love cheese, don't you Aggie? Here, have a piece.

A&M venturing off on its own to the SEC would be the best thing that could possibly happen to Texas. And one of the worst to A&M.  Imagine, for a moment, that the Aggies do just that, and tell Texas that there will be no solidarity pact and they are going to head off to the SEC on their own.  What result?

Well, all of the sudden, Texas is free to join the Big 10. The "Tech problem" just disappears overnight, because if the Aggies want to go to the SEC, they have to band with UT and let the Longhorns go to the Big 10. A unified split allows each to go its separate way, and eliminates an opposition coalition standing in the way of Texas venturing to the Big 10.

Only an Aggie (or SEC predator) could think this a good idea. Whatever gains the Aggies enjoyed from SEC TV dollars, would be easily matched--and likely surpassed--by the huge revenues the University of Texas would enjoy in a suddenly monstrous Big Ten Network. Not only that, but as the Aggies left to join a middling conference in terms of academics and R&D dollars, UT immediately upgrades to the nation's premier conference in terms of academics and R&D dollars. Essentially, the Aggies would be taking a giant step sideways, into a football conference they're unlikely to succeed in, while liberating Texas to become even bigger, richer, and stronger than it already is.

They would, in essence, be choosing to open up an enormous gulf between themselves and Texas--one that cannot open up nearly so wide when the schools are tethered together in the same conference.

Surely, though, the Aggies realize this, right? I mean, they're not suicidal, are they?