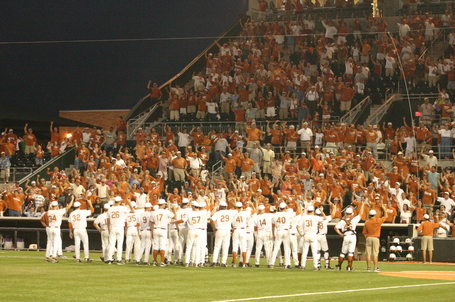 This series has all the makings of a classic. The fifth-ranked Horned Frogs return to Austin to rematch last year’s Super Regional. Do not think for a minute they’re not bitter about leaving empty handed. It is safe to say that TCU has a pitching staff comparable to our own and superior hitting. If we play in Omaha, no one will be able to say we did not earn our ticket. Oh and yes, these games will be televised.

A close look at TCU after the jump...

Both teams are widely considered top-ten teams. TCU dominated a weak Mountain West Conference but, like all baseball teams including the Horns, lost some games they should have won. Surprisingly, the Sooners had their number both times they faced off. Alternatively, the Frogs triumphed against a number of teams that stumped the Horns. They took two out of three games from New Mexico, all four games against the Red Raiders, and even snuck past Oral Roberts. TCU was the only team in the country to claim a 13-0  record in weekend series.

The Horned Frogs cruised past Utah, UNLV, and New Mexico in the MWC Tournament, scoring twenty runs and only allowed four. They carried that momentum into the Fort Worth Regional, having no trouble beating Lamar, Arizona, and Baylor. In the final, TCU crushed Baylor 9-0 to revenge an embarrassing 14-4 April blowout.

At the start of the super regional, both the Longhorns and the Horned Frogs sport 49-11 records. According to BoydsWorld, Texas had the twentieth strongest strength of schedule while TCU played the fifty-third strongest. BoydsWorld RPI puts Texas at fifth with the Frogs only trailing by ten places.

Texas Christian has a reputation for having one of the best pitching staffs in the country. At the plate, this will be Texas’s biggest challenge of the season. Their three starters, Steven Maxwell, Kyle Winkler, and Matt Purke, combined for a 35-2 record. Maxwell has a 2.51 ERA,  has held opponents to a .230 batting average, and earned first team All-Conference honors. Frankly, Matt Purke is the real deal. Lousville Slugger recently named him Freshman Pitcher of the Year. He also brought home first team All-Conference and second team All-American honors. Essentially, the left-hander struck out one out of three batters he faced. Don’t doubt that he is aware that Texas hitters have occasionally struggled against left-handed pitchers.

Kyle Winkler is no slouch either, sporting a 3.05 ERA. Winkler does have a weakness; he is prone to surrendering the occasional homerun. If the starters get in trouble, Tyler Lockwood, Trent Appleby, and Paul Gerrish are all capable relievers. Consider Tyler Lockwood a poor man’s Chance Ruffin. It is probable that the first matchup will be Green and Purke as Augie was concerned about pitching Jungman on short rest.

The Horned Frogs are a better hitting team then we are. There are really no two ways about it. As a team, they are batting an ungodly .345. Compare this to Texas’s best batter, Russell Moldenhauer, who is batting .341. With ninety homeruns, they bring as much power to the plate as the Horns. They also have the benefit of not having to sacrifice bunt because, well, they really don’t need to.

Matt Curry is the do-everything-man for the Horned Frogs. He’s batting .353, with 17 home runs, 59 RBIs and a .725 slugging percentage. Bryan Holaday, who was picked up in the sixth round of the draft this week, is a finalist for the Johnny Bench Award. Holaday, a senior, is a leader on the team and played in all 60 games. Finally, be nervous when Jason Coats has a bat in his hand. He’s batting .377 and has thirteen homeruns to his name.

College baseball is a different breed of game than its Major League sibling. Success in the college game is the result of great pitching and consistent fielding. This weekend will be a matchup of two of the best pitching staffs in the country. This series will feature pitchers that will one-day play that other style of baseball. But for now, one thing separates these two teams: defense. The Horned Frogs committed 23% more errors than the Longhorns. That could very well be the narrow difference between these two ballclubs. Don’t be shocked if the Horns lose the first game, get fired up, and win the next two. For fan motivation, watch TCU’s pregame video. It seems to composed almost entirely of highlights of TCU scoring against Texas. Immediately after, watch this history lesson.