(Writers note: The following was inspired by an article from the front page of SB Nation that PB rec’d about two weeks ago. Check out that front page often, you will learn more about sports in ten minutes of doing that then an hour of Pardon the Interruption. The article imagines what the US of A’s soccer team would look like if soccer was as popular in the States as it is overseas. I am going to attempt to do the same for Longhorn athletes. Since this is an outlandish-hypothetical-thought-experiment, there are a number of obvious assumptions in play. You can read all of them in the aforementioned article. To clarify, I am not suggesting these athletes could trade their prolate-spheriods for spheres with equal success tomorrow. It’s just a fun way to connect our favorite Longhorn athletes with the incomparable, unequivocal awesomeness that is the World Cup.)

There are a number of questions to be answered as the Longhorns enter this tournament. Has Head Coach Muschamp achieved an acceptable level of team fitness? Can Midfielders Fozzy Whitaker and Jordan Shipley survive the tournament without injury? Are young star midfielders Cohl Walla and Avery Bradley ready for the big show? Are veteran defenders Aaron Ross and Michael Huff too old to provide the defense Texas requires to advance far into the tournament? These questions will be answered in the weeks to come and after the jump... 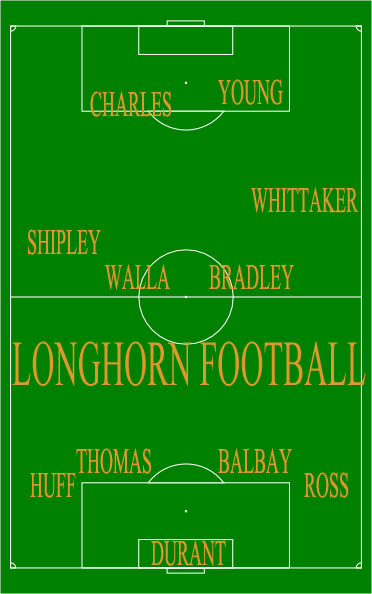 Goalkeeper Kevin Durant is a rising star in goal. Durant stands 6’9’’ and has a 7’4’’ wingspan. Keep in mind that a regulation goal is only eight feet tall and twenty-four feet wide. Durant can essentially cover the height of the goal and a third of its width standing still. However, if there is one constant with Durant, it is that he is never standing still. He has great explosion and incredible touch with the ball in his hands or at his feet. He has instincts that cannot be taught nor learned, but are only gifted to a rare few at birth. The Durantula, the nicknamed coined and chanted by his adoring fans, holds records for the most saves by a first-year goalie. Durant should be an invaluable asset for the Longhorns in goal as long as he has confidence and trust in his teammates.

One of the biggest questions entering the tournament is whether outside defenders Aaron Ross and Michael Huff still have the athleticism to compete with fast strikers such as Percy Harvin and DeSean Jackson. Ross, now twenty-seven, recently finished his third year with the F.C.N.Y. Huff, also twenty-seven and in his third year, has seen diminishing success with the perennially relegated F.C. Oakland. Fans question whether their glory days as footballers have come and gone. Coach Muschamp, brought in to fix a troublesome defense, claims nothing but full faith in their abilities.

Balbay, a Turkish native with Texas roots, is an athlete built for defense. He will be called upon to secure the interior of the Horns defensive scheme. It is a true joy to watch him drop his hips and stop a much larger charging attacker. It is obvious to all that he excels and takes pride in the inglorious side of the pitch. Despite this, Dogus has not always been a fan favorite as many protest his utterly dismal shooting skills. In a penalty shootout, there is little doubt Muschamp will have him shoot last.

Rising star Earl Thomas will line-up next to Balbay in the interior of the team's line. Thomas is also a natural defender but of a different style. Thomas has fast feet and the ability to quickly change direction, skills necessary to cover the world’s fastest strikers. At 5’10’’ Thomas might struggle to cover large strikers like Terrelle Pryor and Robert Griffin III. As a new addition to the lineup, Thomas will provide defense spark and young leadership to an already versatile backfield.

The interior midfield consists of two young stars, Cohl Walla and Avery Bradley. Walla is the rare athlete capable of excelling on any pitch. He found success early in his career in both rugby and cricket but choose to focus his abilities on footie. Walla’s height is a available asset on crosses but his spindly frame allows larger midfielders to overpower him. Walla is a somewhat unknown commodity who has great potential to develop into a Texas legend.

Midfielder Avery Bradley could be the most technically skilled player on this squad. His skills passing, dribbling, and shooting, are highly developed for a player of only nineteen years. There was great debate on whether he should have stayed in the development leagues longer but he desired to play at nothing less than the highest level. Some have called Bradley a selfish player, as he has often seemed disinterested if he does not achieve quick success in a match. Others have questioned his maturity and teamwork. Despite these complaints, there is no denying his young talent. Because of his skill with the ball, Bradley will most likely take free kicks for Texas.

The big question with the outside midfielders is whether they can stay healthy. Jordan Shipley and Fozzy Whittaker have both had problems with injuries throughout their careers. Shipley has a reputation for team play as well as his budding career in house music. Jordan will be counted on to streak down the left sideline in order to cross the ball towards the middle of the field. Because of his toughness, he also has considerable skill at covering defenders. He will play a crucial role on the team offense. If defenses find a way to stop him, Texas could have trouble scoring.

On the opposite side, it is almost a guarantee that Fozzy Whitaker will be injured at some point in the tournament, a tendency that will be deemed unacceptable by Coach Muschamp. Whittaker’s name is routinely matched with the word potential, potential that has yet to fully developed. The Horns would love to utilize him as an attacking midfielder capable of exploding past defenders. When healthy, Whittaker will need to overcome the nasty habit of avoiding open paths to goal and opting to take the ball to the sideline. If Whittaker goes out injured, expect young star Marquise Goodwin to take his place.

Striker is the strength of this Texas team. The Horns have a deadly one-two punch with both size and speed. The speed component is derived from Jamal Charles who has seen his club career take-off with F.C. Chiefs. Charles has a reputation for Formula-1 speed without sacrificing durability. Few defenders will be able to keep up with his pace.

Texas’ greatest player, arguably the greatest in history, is striker and captain Vince Young. Young’s reputation stems largely from his legendary career in the development leagues and his role in an epic tournament victory over F.C.U.S.C, which was widely considered the great club in the world at that time. In that year, he finished second in the Footballer of the Year award to crafty striker Reggie Bush, who later had the award revoked when it was uncovered that he received unreported endorsements. As you well know, Bush has developed quite the reputation lately in the tabloids for directing his attention towards the glamour and glitz of the footballer life rather than events on the pitch. Young is considered by many football experts to be the complete package at striker. He has the size to cast shadows on any defender, the speed to outrun them, and a hip fake capable of leaving them stunned if the first two fail. Young will require a double-team from all who face him, which should open up lanes for his teammate. With questions about his mental attitude fading away, this tournament is Vince’s for the taking.

Waiting on the bench, the Horns have hardworking striker Damion James, technically sound defensive midfielder Connor Rowe, and veteran defenders Quentin Jammer and Nathan Vasher. The position of goalkeeper requires a healthy dose of insanity, something backup Chance Ruffin should provide if necessary. Promising young striker Jordan Hamilton was cut from the team because of his insistence of taking shots from midfield while his open teammates stood watching. Midfielder James Kirkendoll was also cut because of his headbutt of a rival defender in a less-than-friendly friendly match. In the wake of last cup's headbutting incident, Muschamp has zero tolerance for headbutting of any kind.