Share All sharing options for: Texas Baseball Makes a Serious Statement; One Win From Johnny's House

The Longhorn bats woke up on Saturday, exploding for 14 runs against the TCU pitching staff. ESPN color commentator Nomar Garciaparra wanted very badly for Kevin Keyes' alleged elbow to the TCU first baseman on a play that plated Texas' first 2 runs in the 2nd inning to be a big deal, but the Longhorn hitters made sure there would be no doubt and no controversy as to today's outcome. Taylor Jungmann was very Taylor Jungmann-esque, working into the 9th inning and allowing only 6 hits and a single run. Meanwhile, much-heralded TCU starter Steven Maxwell didn't make it out of the fourth--although none of the 5 runs he surrendered were earned.

Texas then proceeded to tee off on the Frog bullpen, finishing with totals of 14 runs on 14 hits--including a fantastic 7-run rally in the fifth inning that essentially put the game out of reach at 12-0. Leading the offense's explosion was Tant Shepherd, who was 4-for-5 including a homerun to left that was absolutely mashed. Cohl Walla went only 1-for-6 in the leadoff spot, but the "1" was huge: a bases-loaded triple to score three in the monster fifth inning. 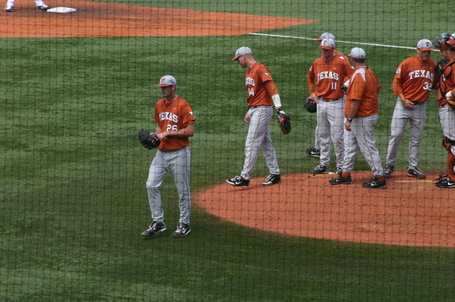 Jungmann comes off the field after another stellar outing

The TCU fielders gave the Longhorns some important help, committing three errors leading to six unearned runs for the Burnt Orange. That could be a good sign for tomorrow--if the adage is true that errors come in bunches, any hit to TCU's confidence defensively bodes well for Texas.

At the end of the day, a blowout like this is no different for tournament purposes than the Frogs' hard-fought win yesterday. It only counts for one, and the Longhorns still have an awful lot of work to do if they want to be around for the closing of Johnny Rosenblatt Stadium. Still, a 14-1 pounding does send some messages: specifically, you don't come through Austin and advance without a fight, we're still Texas and you're still TCU, and anything less than your A-game won't do the trick against the Longhorns. Texas now stands poised to break the Horned Frogs' hearts yet again if they can play well with their backs against the wall for a second straight game. It is certainly encouraging that in the first contest all year where Texas simply had to win, they came up with one of their best performances.

Brandon Workman will take the hill on Sunday as he has done so many times this year to try and pitch Texas back to Omaha where they belong. As was noted in today's broadcast and several places in the comments, Chance Ruffin has also pitched exactly zero innings so far against TCU--which means both Workman and Ruffin are available to throw as many pitches as needed. That should mean Texas won't need 14 runs to win. And that's very good news as TCU will throw yet another 11-1 starter with a stellar ERA in Kyle Winkler. So Texas will need to come out with just as much intensity and focus as they did today in order to take this super regional.

The deciding game takes place Sunday at 3 PM CDT on ESPN. Our understanding is that home/visitor is decided by coin flip.