Texas fans tuning in to the Horns' 9-3 Sunday win over Oklahoma earlier this season heard an unfamiliar voice performing color commentary with surprising freshness for ESPNU. The voice turned out to be former Houston Astros All-Star Morgan Ensberg, a recent entrant to the blogosphere as author of Morgan Ensberg's Baseball IQ. If you haven't read the site you really should as Ensberg writes with the frankness that only a former ballplayer can bring. Anyhow, to kick off our NCAA tournament coverage, Ensberg was kind enough to share his thoughts on everything from UFCUDFF to smallball to metal bats in the college game, so enjoy. 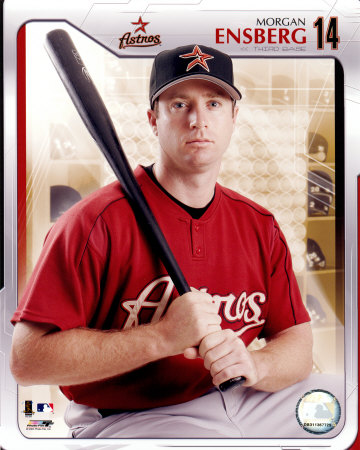 40AS: What did you think of the environment at Disch Falk Field (Ensberg also covered Texas' 14-inning victory over Baylor)?

Morgan Ensberg: I loved it. I loved seeing that many fans supporting college baseball. It is just so great to have that kind of support when you’re in a sport that’s not as popular as football or basketball at the D-1 level. That does mean a ton to those guys, the fact that people show up and support them, and I think it makes them play better but that’s me.

40AS: What are your thoughts on the UFCUDFF playing surface? Do you feel having field turf vice grass degrades the stadium?

ME: I don’t think I would say that it degrades the stadium at all. I think that the idea behind it must have to do with money, that it’s cheaper to have that type of turf than to constantly fix natural grass, but that’s completely my guess. I would rather be on a field that has real grass and dirt, if that’s my choice, but I don’t think the artificial turf is some tremendous sin.

40AS: How do you feel about the Longhorns style of small ball/Augie-ball despite what things like sabremetrics theory suggests they should be doing?

ME: Before I say anything let me just give you a blanket statement. I believe that college baseball is the last level where everyone on the team is trying to win the game. Meaning they’re doing everything they can to win the game. I think that people who pretend that there’s a different way to win games in college baseballI don’t understand the dynamics of college baseball. That brand of ball wouldn’t be effective at the professional level because the professional ball player does a more consistent job of making plays. The purpose of small ball at the college level is to force the college player to make outs.  What Garrido has found is how to put pressure on the opposing team under these particular circumstances. If Garrido was managing a big league ball club he wouldn’t be using this exact brand of ball because he would understand that it wouldn’t work as effectively. What this really is, in my opinion, is Garrido identifying what it takes to win at this level. That’s plain to see to me. The goal is to win, and Texas wins. It’s not apples to apples. If you can find a hole in the opposition you keep on pounding it. I get upset when people have a problem with a team that’s playing amazing baseball and they somehow have a problem with it.

40AS: What have you heard of Texas’ pitching staff?

ME: I haven’t asked scouts or media members about Jungmann, Ruffin, Green or Workman, but when you’re throwing three guys, and your 1-2-3 are all #1s, you’re going to have tremendous success. When your closer has a sub-1 ERA, you’re doing something right. And it’s not like these pitchers have thrown 50 innings, they’re going into the 6th, 7th, 8th. They’re throwing a lot of innings. The UT pitching staff is basically saying "we’re going to throw a strike 0-0, and if you beat us, you’re going to beat us on our best pitch that’s going to be a strike." It’s just good pitching, it’s smart pitching. They get outs early, they get ahead of the count.

40AS: How do you feel about metal bats in the college game?

ME: The reason why college baseball uses metal bats is because it’s less expensive than using wood. Now people will immediately say that the aluminum bat that they’re using costs $350. The bats that we’re using in the big leagues cost between $60 and $80 a bat. I probably went through 4 boxes (a dozen per box) in a season, because of broken bats. If there’s a 160 game season in the big leagues and a 70 game season in college baseball, let’s just say the college guy goes through 1 box, 12 bats, in a season. Well, 12 times 60 is $720 per player. So each person is actually costing double the amount of money (for a wood bat) that it would cost for an aluminum bat.

40AS: What about the safety issue with metal bats?

ME:  I think they have technology today that will make a bat, an aluminum bat, have the exact same qualities of a wooden bat. That’s just my belief based on the fact that I’ve seen a space shuttle go into space. We can send people to the moon, so I think they can make bats that have the same exit velocity of a wooden bat. And I think that’s what the goal should be.

40AS: Your recent blog post titled "LA Times Thinks Dodgers Fans Are Stupid" (you can read it here) was a very pertinent critique of lazy journalism.  As a relatively new member of the blogosphere, where do you stand on the issues of blogs/new media versus traditional journalism?

I think that print media/newspaper media has completely forgotten what their strength is. Their strength should be that when you pick up a newspaper everything in there is factual and backed up. The fact that anybody can write a blog with zero accountability and with total complete control of what comments are made on there…it’s just absurd that people believe blogs more than they believe newspapers. It just goes to show that newspapers have been trying to compete with the TMZ/gossip type stories and that’s not their strength. People should be going to the newspaper to verify or get an inside look at what’s really going on. They should almost be the voice of reason and honesty.

40AS: What about your blog? Do you have an overarching goal or are you just writing for fun?

ME: My overarching goal when I first started the blog was to get a job. It continues to be to get a job. I had sent my resume out to all the teams but they had said "thank you, we don’t have anything right now, but we will keep your resume on file." I thought that was really strange because I didn’t know how they would know if I knew anything about baseball. So I said heck, I’ll start a blog so that teams or broadcasters or writers can get a sneak peak and decide if I know anything about baseball.

40AS: Any predictions for the Longhorns or NCAA tournament?

ME: I don’t know much about odds or chances, but I would say that pitching is so strong with Texas that they would have to be in consideration for a national championship. As you continue to climb up in this ladder though it becomes less about which team has the best players but which team is playing the best. It’s almost like a shootout, there are probably 7-8 teams in the country that could win the championship depending on who’s playing the best. Texas is unique because of the depth of pitching. So I definitely think that if Texas can continue to play defense and pitch the way they have, they can definitely win a championship. I would say that in my opinion that Texas is the favorite. Is that going out on a limb right there?

40AS: What will you be doing for the NCAA Tournament?

ME: I’ll be doing the Cal State Fullerton Regional, then one of the super regionals, and I still hope to come to Omaha. I’m hoping for a call up. I would love to go to Austin (for a super). Those fans were so good to me even though I represent the enemy being from California. They were so nice to me and took me in. I loved Austin.

40AS: Finally, having been there and won a title I have to ask, what’s it like playing in Omaha?

ME: There is nothing better than playing in Omaha. It is the end-all be-all for the college player. It’s such a special place, it’s almost held in a mythic regard by college players because Omaha represents the best. It represents excellence and getting to the end to play for a national championship. Playing in front of 25,000 fans, I’m so happy that Omaha, the city of Omaha gets to have that tournament there, they do a great job.

40AS: Thanks, we appreciate your talking to BON.