Share All sharing options for: A Q&A with SI writer Stewart Mandel 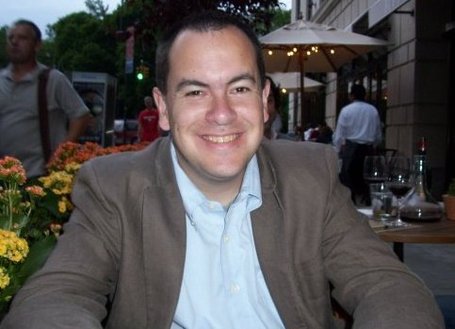 College football is my favorite sport to cover.
The stakes are so high week in and week out,
and the level of emotion it elicits from both the fans
and the participants is unrivaled.

Stewart Mandel is a senior writer for Sports Illustrated.

(1) Most of your writing for SI.com is column-length opining. I'm curious how, if at all, the parameters of your sandbox ever affect you when confronted with something as big, messy, and complicated as this conference realignment issue? In my sandbox, for instance, I from time to time wind up writing gargantuan posts. You're a book author, so there's that, but assuming you're not going to write a full treatise on a subject, how do you approach complex topics in a way that fits your parameters and serves the mission of your column? Alternatively, am I making a mountain out of a mole hill and you just seize the angle you find most interesting and present it as concisely as possible? I know I would struggle to do your job well. What are the challenges for you?

Good question, as I've struggled with this very thing since the Pac-16 reports first broke. Not just that it's complicated, but that it's moving so fast, with new tidbits leaking seemingly by the hour. Admittedly, people following my Twitter feed would almost assuredly be more informed than were they to rely solely on traditional columns that come out, at most, once a day.

So with that in mind, we've tried to pick out certain key issues that merit examination in a stand-alone column. See: Andy Staples' Baylor column last night. However, yesterday, with so many moving pieces to discuss, and with the understanding that I'm writing to a general audience that does not sit at their computer all day following every little expansion development, I thought it best to write something more big-picture, explaining the state of the situation but hopefully without overwhelming people. Hence, the "16 scenarios" conceit.

My weekly Mailbag is also a good forum with which to address various little issues that many readers are curious about. Today I will pick out some questions that, in theory, you could break out and write a 2,000 word column about, but might bore 90 percent of the audience if you did. Instead, I can write 7 to 10 "mini-columns" that hopefully inform as many readers as possible.

(2) Clearly, there's a good bit of jockeying for pole position among conferences right now. That is perhaps a rational, understandable course of action, but do you think it possible that each alliance pursuing it's own best interests winds up harming the collective interest of all the universities? What is the proper balance of cooperation and competition in this particular marketplace?

There's no question everyone's out for themselves right now. If you're a Big 12 school, the financial stakes are too high right now to sit back and hope everything works out for the best. You've got to protect your school's interests, even if it comes at the cost of negatively impacting longstanding partners. Now I'm not saying that's absolutely how this will play out. There does seem to be a genuine effort going on between most of the schools to try and maintain the Big 12, because ultimately that's what's best for that part of the country as as a whole. Nobody could argue that. But the reality is, the Big 12 is stuck in the stone ages TV-wise/revenue wise. (And by stone ages, I mean pre-Big Ten Network). If the Big 12 can't get its act together, and if the Big Ten or Pac-10 comes along and is offering an opportunity to double or triple your annual revenue, you'd be doing your school and all its athletes a disservice to stay put.

(3) If you were University of Texas President Bill Powers and you had to decide, here and now, between the following options for Texas, which would you choose, and why?

(B) Join the Big 10, not yet knowing whether or not Notre Dame will walk in the door behind you

(C) Commit to doing what you can to holding together the Big 12, either to buy yourself time or as a first step to trying to secure its viability for the forseeable future.

C, however if it's not possible, A. I do think Texas could hold together the Big 12, even without Nebraska/Missouri, but the league would start to drift more toward ACC/Big East than SEC/Big Ten in terms of national perception, TV dollars and long-term stability. Therefore, what the Pac-10 is offering is extremely enticing. It's a chance to secure your long-term future while also preserving all of your most important rivalries and still playing the majority of your schedule against familiar schools. This, to me, seems more appealing than the Big Ten/Notre Dame, which, while more concrete (its TV network is already up and running; the Pac-10's is hypothetical), would not be as good a fit for Texas. It would be a geographical outlier, and it would not enjoy the Alpha Dog status it does today in a league controlled by Ohio State and Michigan.

(4) You have written that Notre Dame will remain independent unless their hand is forced. What scenario has to play out for the Irish to give up their self-sufficiency?

Presumably, a whole-scale destruction of the Big East.

(5) What is really going with Missouri and Nebraska? Is there an ultimatum? Nebraska AD Tom Osbourne has denied this.

I wish I knew. I think it's clear some sort of deadline was established last Friday in KC (based on who you listen to, it's either this Friday, end of weekend or June 15). However, it's possible this was not a Big 12 ultimatum as much as a Texas ultimatum. As in, make up your mind or we're going to start planning our own exit strategy. There's no tangible threat the conference could use against these schools. They're not going to kick them out. So "ultimatum" may be putting it too strongly.

(6) Describe the college football landscape in five years. What will the BCS look like?

I think after this up-coming four-year ESPN contract we will finally move to a Plus One. As we've now seen, Larry Scott is not your typical, reactionary college commissioner. He embraces change, unlike his predecessor, Tom Hansen, who was vehemently opposed to it. If one of the two Rose Bowl partners is finally willing to stop putting that game ahead of the national title, we could finally take that next step, which several conferences (SEC, ACC, Mtn West) and all the bowls but the Rose support. I also think the MWC will have a seat at the table by then, either because of adding Boise State or b/c of the possible implosion of the Big 12.

(7) Give us your honest opinion: Who wins the Rose Bowl if Colt McCoy plays the entire game?

Ha! Still Alabama -- but it would have been a much better game.

A big thank you to Stewart for taking time for the BON Q&A. Visit his personal blog at stewartmandel.wordpress.com.