As you probably heard, the Horns emerged victorious over the University of Louisiana, Rider, and Rice. Three relatively easy victories awarded them the right to host TCU this upcoming weekend. A preview of the upcoming Super Regional will be up tomorrow. Until then, photos and thoughts about the Regional. 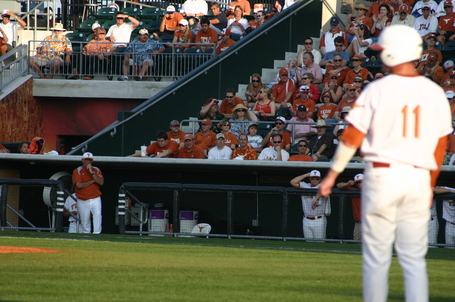 All eyes were on a recovered Brandon Loy

Brandon Loy's quick return was in doubt before the Big-12 Tournament after an MRI showed he had a contusion on his left scapula. Anyone who watched those games knows how much his presence at shortstop was missed. Jordan Etier has a great glove but just doesn't cover as much ground as Loy. It's no coincidence that the Horns played their worst defense of the season without their best defensive player. Brandon started his comeback strong against Rider with a walk, two singles, and a triple. Unfortunately, he went hitless in the two following games. In my eyes, the defensive support he provides outweighs his off-days at the plate.

More photos and random thoughts after the jump... 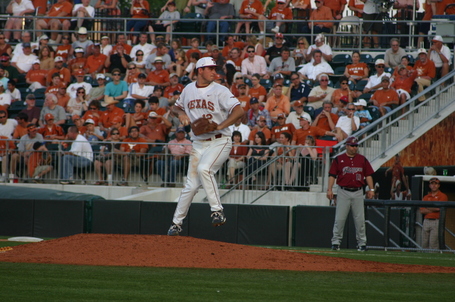 Brandon Workman was dominant on Friday despite not having total control over his arsenal of pitches. His first six pitches were balls, warranting a coaches trip to the mound. A short talk was all he needed to get his technique in order. In his defense, the umpire wasn't providing him an assistance. Brandon went on to throw 130 pitches for a scoreless, complete game. Workman has a great frame at 6'5'' and 220 lbs but has yet to fully master control of his fastball and occasionally loses his curveball. It was discussed in the postgame interview, "It was huge because I was walking guys and could not really throw strikes early in the game. When I was able to get a couple of double play balls and then hard hit ground balls to the infielders, they made all of the plays, and that was big in keeping my pitch count down and keeping runs off the board." 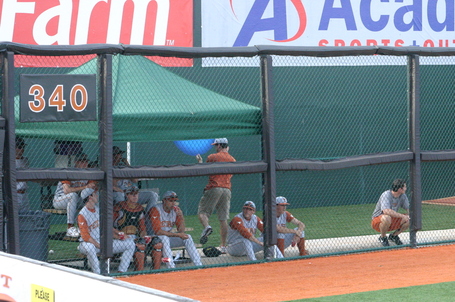 It's a hard life for a Texas reliever

There are fifteen pitchers on our roster (well, fourteen if you count Dicharry). Only four--the three starters and Ruffin--pitched over the weekend. There's two schools of thought here. The first is that they are all well rested for the Super Regional and Omaha. The other is that it is a little concerning that they haven't seen the field in weeks. Will they be ready when called upon? 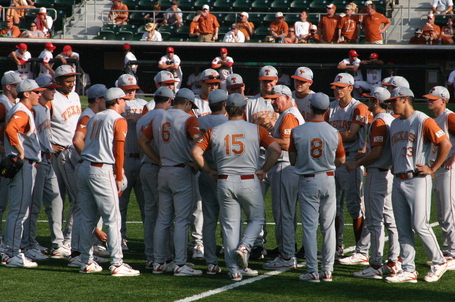 "This isn't my first rodeo"

Remember the Big-12 Tournament? Still have concerns? Augie doesn't: "What you are seeing is a composite of teamwork, unselfishness, and just sticking to basic fundamentals. We came back from Oklahoma, and we had a lot of questions about that." Workman also made a postgame comment that blatantly said that the Horns didn't really have anything to play for. The Horns clearly got back on track and put the disaster that was the Big-12 Tournament far behind them. 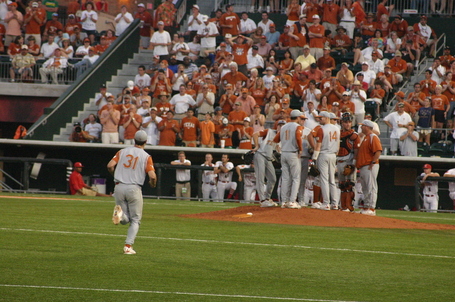 A glorious sight for a Longhorn Fan

Chance Ruffin is simply phenomenal. Is it too early to say he's Strasburg-esque? He faced seven batters on Saturday night, striking out five to earn the save. Ruffin returned to the mound again on Sunday to close the game without any hiccups. Ruffin was drafted with the forty-eighth pick in the MLB draft on Tuesday. The guys over at the Detriot Tigers SB Blog weren't too impressed, "Not happy. Above average fastball, plus slider, curve is a bit above average, change is average." I'm not sure what's average about being named Big 12 Player of the Year by the Statesman or having a 0.73 ERA. Moving Ruffin to closer could have been the most successful decision Augie made all season. 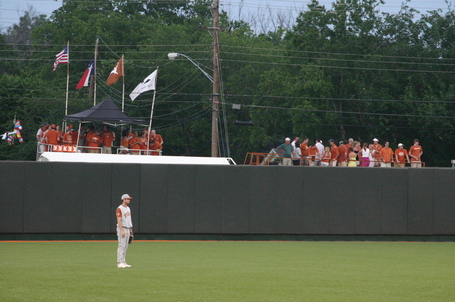 Connor Rowe guards the outfield below the cheap seats

Connor Rowe's season has been inconsistent at best. In truth, it has been an up and down roller-coaster. Let's hope that this weekend was the lowest dip before the last big climb. There's no denying that Rowe's an asset in the outfield. He has elite arm strength and is probably the fastest player in burnt orange. However, he's a major liability at the plate. His recent stats are ugly: 12 at-bats, 0 hits, 4 strikeouts.  At some point, Augie has to weigh his contributions in the outfield against his struggles at the plate. There's no shortage of alternatives, especially in Jonathan Walsh and Kyle Lusson. It's possible that we haven't seen the last of Walsh, who played extremely well for a freshman. On the other hand, this isn't Rowe's first rodeo either. 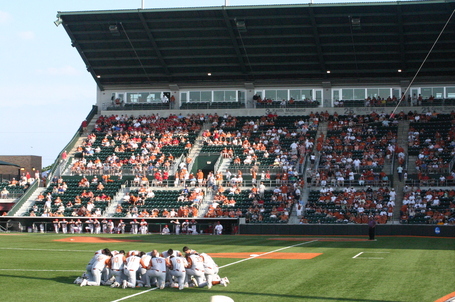 The team prays for some love for Jordan Etier

Jordan Etier has been getting flack, a whole lot of flack, for his hitting. Once you get past his batting average,  he isn't necessarily a terrible ninth hitter. The following chart compares him to other ninth batters at elite programs. Yes, his batting average is the lowest but the rest of his stats are consistent with the pack. Keep in mind that the Longhorns are far from offensive-minded. We value consistent fielding, which happens to be Jordan's forte.