The individual player ratings in the EA SPORTS Madden and NCAA Football videogames have become the virtual DNA of these football simulations. There is not a set formula to determine the speed or agility or accuracy or strength of a player's digital persona. It's pretty much all based on the eyeball test.

How do I know? I have been fortunate enough to work closely with EA SPORTS to create a few magazines on these games. Plowing through an entire Excel file full of Matrix-like code three months before the game releases is an odd mix of geekiness, science and sports.

For those who aren't familiar, the Madden ratings are based on a 100-point scale, although the lowest attribute rating is usually no less than a 50. Anything in the mid- to high 90s is elite. The low to mid-80s is about average.

While the good folks at EA have already determined the attributes of the players for the 2010 season, I thought I'd do my own ratings evaluation to preview one of the most intriguing positions headlining into the season: running back. So, let's put another quarter in the running back carousel and try to figure out where this thing will go in about five weeks. 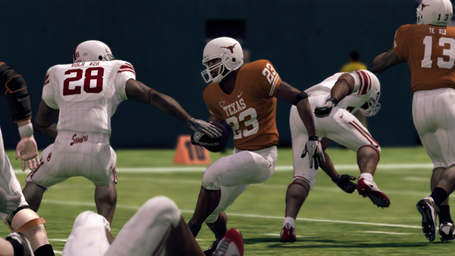 Last year's leading rusher racked up just 552 yards, but did have an impressive 4.8 yards per carry. Newton is the best all-around runner we have. He has great balance, and although he doesn't have great top speed, he can accelerate with quick feet. He doesn't have the frame to build a lot of muscle, but he is big enough to handle 20-plus touches per game. He's also going to have to learn to block for Gilbert if we're going to see more snaps from under center.

For me, Monroe is the most intriguing player on offense other than Garrett Gilbert. I have no idea what we're going to get from him. We didn't get to see him enough last year, but his 680 all-purpose yards were enough to make me wanting a lot more. He might only get a few touches a game, but he sure is fun to watch. 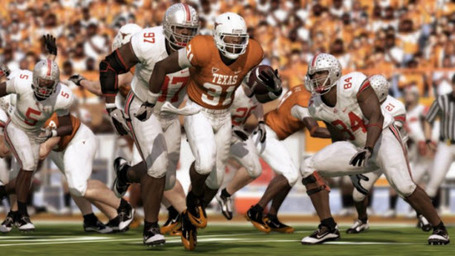 It wouldn't be Texas without the goal-line threat. Cody was the finisher last year, scoring 12 times (that's just one less touchdown than Jordan Shipley had in 2009). His 335 yards were easy to overlook, and don't expect many more this season. Johnson is still a crucial part of this offense, and if Texas is going to commit more to the run, he could be more versatile than ever. Blocking back?

McGee will be suspended for the Rice game because of an arrest in the spring. His role is clearly diminishing. He had just 300 yards and two touchdowns last year. Still, McGee can have some performances that make you wonder why he can't hang on to a full-time job. The guy did have a 5.4 yards-per-carry average last year. And being a senior, he could be the default back if others are injured or just not getting the job done.

If it were not for is inconsistency and inability to stay healthy, Fozzy "Waka Waka" Whittaker just might be the most complete runner on the team. He's shown great overall talent. This might be his final year to prove he's capable of handling the full-time job.

Let's see... an All-State, All-American big back wearing No. 32? Worked last time. Shead checks in at about 6-2, 215 pounds. Come get some. He runs hard, shows good balance, but doesn't make a lot of moves. Mack Brown has not been shy about playing freshmen runners, so watch for Shead to get some totes early in the season. I don't see the starting backfield consisting of an unproven sophomore quarterback and a true freshman running back. But the thought of it does make me want to fast-forward to 2011 and 2012. That said, Shead could be a very big surprise this year and leave us all wanting to see more.

(Disclaimer: What I know about Shead is based only on the film I have seen and the reports I've read. So too are the ratings below based.)

Those are your options. Agree on the ratings? Disagree? Leave a comment below with how you would rate each player.