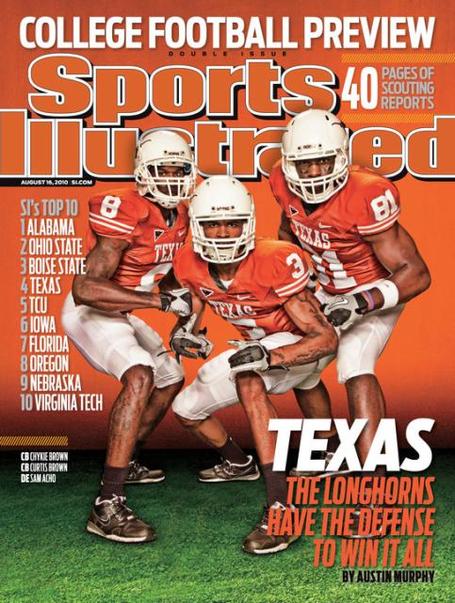 Sports Illustrated's 2010 college football preview issue is out now and feature fours different regional covers, each with one of the top four teams in SI's preseason poll: Alabama, Ohio State, Boise State and Texas. Each cover has three defensive players. The Texas trio of Sam Acho Curtis Brown and Chykie Brown grace the southwest region cover. (Check out a behind-the-scenes video of the photo shoot here.)

SI college football writer Andy Staples penned the 2010 Texas outlook inside the issue. BurntOrangeNation.com caught up with Andy to talk about what he sees in store this year for Texas, the Big 12 and his prediction on where the conference and college football are headed in the near future. So grab you oven mitt, because there are plenty of hot sports opinions to handle here.

There are a lot of uncertainties heading into this season. What are Texas's biggest strengths and weaknesses that will play out this year?

Andy Staples: The strengths are the fact that they've been stockpiling athletes for years. It seems to have a cumulative effect, and Texas has been doing it longer than just about anybody. You don't see that many transfers as you do with other programs.

The other thing is, people don't give Greg Davis enough credit for being versatile. It's hard to not let your ego take over and say, "Well, I'm going to do it this way because this is the way I want to do it, and this is the way it should be done." To really play to the strengths of the guys you have is not the easiest thing to do. And he's done it very well over the years.

I like what they are attempting to switch to with the downhill running. You've got to have some run support. The play-action has to mean something. When they take a handoff, the defense needs to believe that they're going to run. Otherwise, (Garrett) Gilbert's just going to get clobbered. And that line has to prove it can block. They didn't get a chance to do that last year. If they can seriously handle those people up front, they're going to open holes up for Tre Newton and Fozzy Whittaker and Cody Johnson, whoever runs the ball. And that's going to open things up for Gilbert. There has to be some sort of running game to keep the defense honest.

AS: I think one hand washes the other. If the running game is good, then there's less pressure on Garrett Gilbert. He's not going to have to get the snap, throw and try to force something in there. He knows he can hand off and get a few yards on the ground, or when he fakes the hand-off, the safety's going to suck up a little bit and he's going to find an open receiver.

If I had to pick one, I'd say the running game is the key because it allows Garrett Gilbert to be more comfortable. He doesn't have to win games for you right away. If the running game isn't working and you have to rely on his arm exclusively, that's where a sophomore gets in trouble. The running game as a tool to take pressure off him is so vital.

I talked to Mack Brown about this when I was out there in March. He feels like this is what they have to do. He said something that I thought was really interesting...

that this also helps Texas's defense. Last year they played Alabama in the National Championship Game. The only other good running team they played was Oklahoma. So it's something they didn't see very often. At least this way they see it every day in practice, so if they get into a game like this, they're prepared. Now, that's obviously not the main reason they did this. But that's one of the things that was on his mind.

The other thing he said that I thought was really honest, and I was surprised he actually said it, was that in the Colt McCoy era, he was afraid of when it would rain. He felt they lacked the ground game to adapt if weather took away the passing game. So this way you are a lot more versatile and you can handle any sort of situation that comes at you.

Which Texas player intrigues you most this season?

AS: (Alex) Okafor, definitely. I remember seeing him on a video as a recruit and thinking that this guy could be really, really good. He came in and played very well last year. The last couple years they've had that edge guy that really messes up the opposing quarterback.

So if he takes over the rush end spot, Sam Acho could go inside.

AS: And that's good, too, because that's a speed upgrade. You look back at those Miami defenses of the '80s and '90s, they're philosophy was, you make a safety a linebacker, you make a linebacker a defense end, you make a defense end a defensive tackle. You might be undersized, but you'll outrun everybody. And that always worked for them. Sometimes you can get a Henry Melton and you can make a running back a defensive tackle. It's a good luxury to have. Not many programs can do that.

So what are your thoughts on using an H-back position?

AS: When I was (in Austin), Mack actually drew up some formations for me on a legal pad, and I thought it was really cool what they want to do with the H-back. If you have the right guy in that spot-and only schools like Texas or Alabama or USC or Florida can recruit well enough to find that guy and have more than one-you can do all kinds of stuff.

You could conceivably go from a pro set, two-back I-formation with two receivers and a tight end, and if he's versatile enough, you could split some guys out and wide up with a five-wide formation, or four-wide with a single back. You could take away the traditional tight end, have three receivers on the field. You could have him as the tight end, put him in motion, split him out, put him back as a fullback. There are so many things you can do with one personnel group. You can really put a defense on edge because they don't know within four or five seconds of snapping the ball what you're going to do.

You could be in an I-formation, an off-set-I, single back, have the tight end right next to the tackle, you could have them split-there's so many things you can do. If you have the right guy in that spot, and that's the big question mark: are any of the guys they have that guy? That's why I was intrigued that Chris Whaley got moved there. I liked Whaley as a back, but he might be the guy in that spot. That person may not get a ton of credit because they might not catch a ton of passes, and they're going to do a lot of blocking. But if that works out, that could be the most important position in their offense.

What are your thoughts on the state of the Big 12 right now? Are there any sleeper teams?

How does the shrinking Big 12, as we call it now, fit in with other conferences expanding?

AS: I think as long as they have Texas and Oklahoma, they're going to get national respect. Those schools have earned every bit of respect they've gotten. They are going to compete for a national title most years. They are going need some improvement from the Texas A&Ms and from what's left of the north. They do need a few more teams to rise. I think the Big 12 will have respect, but I think it will be on a level below the SEC, Big 10 and PAC 10. I think those three leagues are going to be viewed as the best.

Do you see the Big 12 staying with 10 teams in the next four or five years?

AS: I don't know that the Big 12 still exists in five years. If Texas decides it doesn't like how things are going, Texas could blow it up at any moment. They pretty much hold all the cards. Even if Oklahoma got picked off or decided it wanted to do something else, that could break it off as well. Those two programs, you've gotta keep them happy.

There will be other conferences trying to expand again. I talked to Larry Scott of the PAC 10 about two or three weeks ago, and he said the 16-team super conference is not a dead idea. He said he thinks their conference is probably done for a while, but he wouldn't put it past other conferences to try to go to 16 teams. The TV people were very, very excited about the concept, and they're the ones who write the checks. If they push for it, and they think it's a good idea, it's probably going to happen at some point.

It may be several years down the road because everybody is in pretty long committals right now. But if the people with the money say they like something, it usually tends to happen.

What are some of the major changes you see coming to college football in the near future?

AS: I think the postseason is probably going to change. I'm interested to see if this season has anything to do with it, because if TCU and Boise State can go undefeated, which is definitely not a given, chances are you've got one of them playing for the national title. I think the second one of those schools plays for the national title, some people are going to start thinking, "Well, maybe the BSC is not keeping the power where it's supposed to."

That's really all the BSC did is keep those six conferences that have automatic bids basically in power and holding all the cards in college football. It's not about money. There's more money in a playoff, and the people behind the BCS will admit that. But it is about power, and if one of those schools gets in there, then all of the sudden, the power base has been eroded. What's the point of not making as much money as you can if you're not keeping all the power you're supposed to be keeping?

Stuart Mandel thinks they'll probably be a plus-one, and I think that's the most likely, but I'm of the belief that that's a slippery slope to a playoff. And I hope it slides all the way to a 16-team playoff. The current BCS deal runs out after 2014; I could see them doing it after that.

Good stuff, Andy. BON would like to thank Andy for taking the time to do this interview. And, yes, Andy admitted to being an occasional reader of BON. Glad to have you, Andy. Stop buy any time. "What's that, Andy, you'd like to link back to BON in your articles? Well, sure, that'd be just fine."