With the season just around the corner, it's time to take a brief look at our favorite northern neighbors.  The Land Thieves went into the 2009 season with pretty large expectations, but a questionable offensive line and some unfortunate injuries derailed whatever potential they had and they suffered five losses.  It may be worth noting that they were all close losses save their thumping in Lubbock, but nonetheless, five-loss seasons are hard to swallow for a top program, injuries or not. 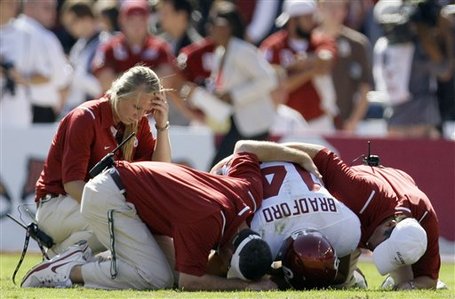 Texas fans can actually sympathize with this...

This season, expectations are once again high, with Oklahoma almost universally appearing in the Top 3 of preseason polls and going as high as #1.  Despite the loss of some big named players and their struggles last year, pundits are high on Oklahoma's talent and ability to replace important pieces.

Today, I'll take a quick look at their offensive units and what we can expect out of them.  Tomorrow, I'll tackle their defense.

The starter is obviously Landry Jones, who put in a respectable 2009 season despite being thrown into the fire after Bradford's injury.  When I've seen him, Jones has displayed a good arm and decent accuracy, but he can get jittery in the pocket, not uncommon for a young QB, and in tough situations his overall play can take a significant dip.  He is a bit more mobile than Sam Bradford, but Colt McCoy he is not.  If you look at his statistical splits, he struggled mightily on third and long, where QB's arguably earn their money (so to speak), and he was not very good in tight ball games.  To no one's surprise, he had a rough time against the two best defenses he faced all year, Texas and Nebraska, throwing a combined seven interceptions, and his road games were not nearly as strong as his home performances.  That being said, Jones performed fairly well considering the circumstances, and while I am a homer and prefer Gilbert over him, there's no question Jones at least has some solid production backing him up.  Jones will not be Sam Bradford, but he has the tools to be a good quarterback provided the rest of the offense improves around him.

He apparently plans to regrow his famous mustache from last year, saying that "Sooner nation needs the stache."  By all means, grow it back.  I'd love to see Sam Acho rip it off of you.

Behind him are Drew Allen and Blake Bell.  Both are young players and have athletic talent, with Blake Bell in particular being quarterback eye candy.  Still, OU is in the same boat as Texas:  If their young starter goes down, their season is in jeopardy.

In defense of Landry Jones' struggles, Oklahoma had a pretty inconsistent wide receiver corps. outside of Ryan Broyles (that sounds familiar too...).  Broyles is a legit playmaker and is by far the most proven receiver on the team, hauling in over double the amount of receptions and yards than the next leading receiver (which was RB Demarco Murray) and grabbing 15 touchdown passes.  Another notable is the freshman Kenny Stills, who has drawn positive reviews in camp and looks to be a reliable option.  They will need him to play well, because besides Broyles, it's hard to see where consistent production will come from.  DeJuan Miller looks the part of a big time wide receiver, but similar to our own Malcolm Williams, he can be hit or miss.  Brandon Caleb returns from last season but never impressed me much when I saw him play, and that goes for the senior Cameron Kenney as well.  This could be problematic for OU if they face a team that is capable of covering Broyles (like... Texas), but this may not be an issue against the rest of their Big 12 schedule.

Demarco Murray may be injury prone, but unlike Fozzy, the guy has played enough to put up solid numbers.  He is deadly on screen plays, as we have found out, and he has the quickness and speed to break big runs.  Oklahoma's run game has hit a brick wall against Texas the last couple of years, but such a game might very well come down to one big play that is broken by a guy like Murray.  He is not the consistent runner that Chris Brown was, but he can do significant damage on the edge and out of the backfield as a receiver.  He will be one of Landry Jones' biggest assets.

Their backups aren't bad, either.  From what I can tell, Mossis Madu is back as a runningback and he is the second option, while Jermie Calhoun showed some brief flashes last year.  From camp, Jonathon Miller has drawn positive reviews, but the talented Roy Finch, as PB reported, is out 6-8 weeks with an injury.  Not a huge blow as long as Murray stays healthy, but it limits their options a little.

This a solid group overall, but I think there is an appreciable dropoff after Murray.

What I recall from last year is Jermaine Gresham missing the season and Brody Eldridge being moved to center, where he was the greatest center in OU history, and then moving back to tight end, where he was the greatest blocking tight end in OU history.  Or something along those lines.  In any case, they have returning experience but it is not elite.  Trent Ratteree and James Hanna saw significant field time last season, but I see both as more blocking tight ends than great receiving threats (Ratteree deserves credit for a nice Sun Bowl, though).  These guys are your projected starters for the season, but from what I hear from camp, guys like top recruit Austin Haywood and Trey Millard are showing greater potential as receiving threats.  No one here is on Gresham's level yet, but it's a bit more pinned down than Texas' situation.

Oklahoma had some bad luck with injuries last year, but some of that bad luck was created by poor offensive line play.  While the line got better as the season progressed, it was a very disappointing season even for first rounder Trent Williams.  This year, it looks to be a lot better for Oklahoma.  Here's the starting five from left to right:

Donald Stephenson missed last year due to academics, and his return should bolster the OU line.  While they lose Trent Williams, OU fans are high on Stephenson.  I don't have personal experience watching him play a whole lot since he only had spot duty in 2008 and missed all of 2009, but he was projected to start last year and is expected to be a solid left tackle.

Stephen Good did play last year and has good strength, but the guy had his struggles in the interior against quick defensive tackles.  Habern is a good center and Evans is a talented young guard, so the interior line should be decent.  Senior Eric Mensik is a converted tight end and may lack a little size, so he is a project worth keeping an eye on.

The problem with this line is that it's thin.  They have a decent backup center in Brian Lepak, but former LSU Tiger Jarvis Jones is the backup for, well, everyone else, it seems.  Jones is versatile enough to play both guard and tackle, as he did last year with varying degrees of success, but besides him the backups consist of a bunch of freshman or redshirt freshman.  One injury would be problematic; two could be devastating.  The Land Thieves may think they deserve a break from bad injuries, but we've thought for several years we're due a break at tight end and that didn't happen.

Provided Texas does not suffer significant DL injuries, I still like our D-line matched up against this unit.

I'll cover the rest of special teams with the defense tomorrow, but I'll lump place kicking with the offense.  Simply put, OU is not in a good situation here.  The projected starter is Patrick O'hara and the backup is Jimmy Stevens, neither of whom has shown a strong, consistent leg.  This will put more pressure on the offense to score points, as Oklahoma cannot afford to get into a defensive slugfest that is settled by field goals.  Maybe they can take a tip from Mike Leach and ask random students to walk on.

This will most certainly not be the 2008 Oklahoma Sooners, but if their defense is as good as advertised, they won't have to be.  A lot will ride on the performance of the offensive line, which was the goat last year.  If they can keep Landry Jones upright and provide running space for Murray, this offense should put up a respectable amount of points against most opponents.  Also, it will be helpful if another receiver or two steps up to help Ryan Broyles.  Otherwise, teams with a strong secondary like Texas or Nebraska (in a possible CCG matchup) can severely limit what Oklahoma can do.  Jones will obviously have to play well for OU to seek the shiny crystal ball, but I feel that if he is asked to gunsling his way to victory, Oklahoma simply will not get there.

Matched up against our defense, I feel fairly confident that we can handle most of what Oklahoma would want to do.  Murray scares me the most, but overall I think we have the tools to counter Oklahoma's strengths.  All evaluations, of course, are subject to change once we actually see some football.