When the Cibolo Steele offense managed to run plays offensively, they looked like a football team with the potential to scare some opponents in the playoffs. The problem was being able to run the play.

While it was excusable to commit penalties and generally look sloppy in the Week O game on national television against SA Madison -- nerves, the setting, the early-season nature of the game -- none of those excuses were valid for this tilt against Austin High in Week 4.

By this author's count, the Knights committed 13 false start penalties throughout the game. The Austin High defensive line surely helped out with several of those late in the game, as they apparently took notice and began shifting and twitching before the snap in an attempt to get their opponents across the line of scrimmage to move.

Overall, 23 penalties amounted to 140 yards walked off against the home team.

For Mike Jinks and his team, then, there is plenty of work to be done. And little time spent savoring a dominating, 27-7 win.

On offense, the domination resulted from the prodigious talents of the Steele Big Three -- running back Malcolm Brown, the most recent Texas commit in the 2011 class, quarterback Tommy Armstrong, and wide receiver Blake Gardner. On defense, the Cibolo Steele line, led by Marquis Anderson and Alex Lincoln, controlled the line of scrimmage and harassed Austin High quarterback Jordan Jaquez into three interceptions.

The first Steele score came courtesy of a big penalty on the Maroons -- a roughing the kicker call on 4th and 15 that extended the opening drive for the Knights and resulted in a 7-yard touchdown pass from Armstrong to his favorite target Gardner on third down.

With star Austin High wide receiver Cayleb Jones clearly hobbled by a left knee injury and the big offensive line unable to win their battles at the point of attack in the running game (22 carries for 61 yards overall), the Austin High offense was an exercise in futility until a meaningless touchdown late ended the shut out.

Jones did not play in the second half after catching only three passes for 32 yards in the first half and the two longest Austin High drives while the game was still somewhat in question both resulted in interceptions.

The decisive second quarter made sure there was little doubt. On the first play from scrimmage on the fourth Knight drive, Brown broke through the line of scrimmage and outran the Maroons defense to the end zone for a 65-yard touchdown run.

Then, before halftime, a slip screen to Gardner caught the Austin High defense blitzing and the senior receiver took it 39 yards for the touchdown that clearly put the game out of reach.

After an early score in the second half on a 7-yard touchdown run by Malcolm Brown ended a drive in which the Texas commit carried the ball five times for 52 yards, the three stars on offense took an early end to their evening and the rest of the game was nothing more than the clock melting away to nothing. 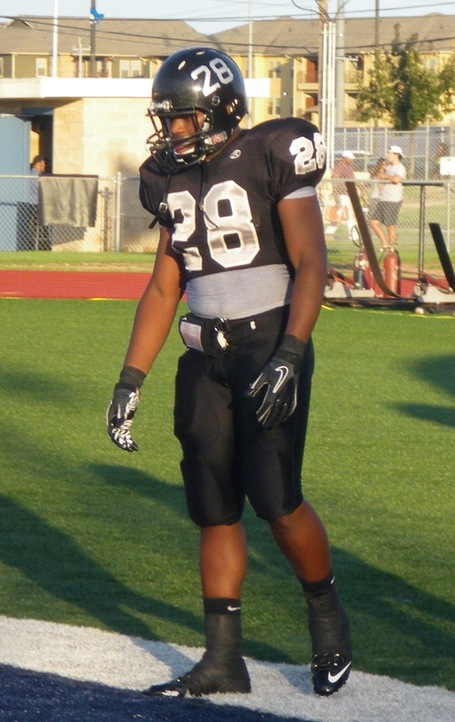 Malcolm Brown, senior Cibolo Steele running back -- The source of much discussion after the Week O loss to SA Madison was Brown's conditioning. However, as generally expected, Brown has worked himself into better shape and now appears about 10 pounds lighter. About a shade over 6-0 and with long, lean arms, Brown is a player who could easily add a significant amount of mass to his upper body in college -- the question is how much weight he can again and still maintain his quickness, a major concern for a player who won't be running away from many collegiate defensive backs anyway.

It wasn't a heavy load night for Brown, who carried only 15 times, gaining 184 yards and scoring the two touchdowns in the process. Discounting a fumble directly after the exchange, Brown had only three running plays go for five yards or less, despite the fact that Austin High loaded up the box in an effort to stop him. The combination of his speed, power, and quick feet made him difficult to bring down without picking up significant positive yardage.

Though Brown doesn't run with particularly good body lean, his lower body strength and ability to drive his legs on contact allowed him to step through arm tackles, per usual. And while he didn't run over any defenders on this evening or show off his balance on spin moves, there's certainly enough evidence out there that Brown can do those things consistently.

Tommy Armstrong, junior Cibolo Steele quarterback -- A couple looks at the stop-start ability of Armstrong and his impressive initial acceleration are enough to tell that the Knight signal caller has a future somewhere in Division I football. The question is whether or not that position will be at quarterback.

The supreme talent of Malcolm Brown means that Armstrong isn't asked to do much more than manage the game for Steele -- look downfield for Gardner a couple times a night, make the proper decision on zone read plays, and generally not make the same mistakes that plagued him early against Madison.

On this night, Armstrong did all those things, avoiding any fumbles or poor decisions with the football. He has a strong arm that he can show off on deep throws to Gardner or intermediate routes, when he can really zing the football with accuracy. The deep throws need some work, as he seems to overthrow Gardner on a consistent basis -- it's positive in the sense that he's not in danger of throwing interceptions on those plays, but he does need to give his receiver a chance to make a play on the football.

Overall, Armstrong would best be described as somewhat raw at the position. However, his dual-threat ability will make him appealing to teams running spread offenses and his arm question is not under question, nor his mechanics. He might be able to contribute more quickly at another position (like wide receiver or safety), but Armstrong's skills as a quarterback will surely warrant a look from some Division I schools.

Marquis Anderson, senior Cibolo Steele defensvie tackle -- The major concern about Anderson has always been about his frame -- his thin lower body means that he will always carry most of his weight through his shoulders, arms, and torso. Right now, quite a bit of that weight is bad weight, as Anderson has a pretty significant at his listed 280 pounds. The good news for Sooner fans is that there is room on his frame to add muscle mass in his upper body.

Anderson was most active on special teams, making a tackle running down a fake and nearly blocking a punt on another play. The rest of the time he wasn't particularly noticeable making plays in the backfield -- he's not a player who consistently shoots gaps. A major reason is that is that he doesn't look to have any developed moves or ability to play half a man. He does shoot his hands well at times and when he comes off the ball low, he does have the strength to bull rush his opponent. 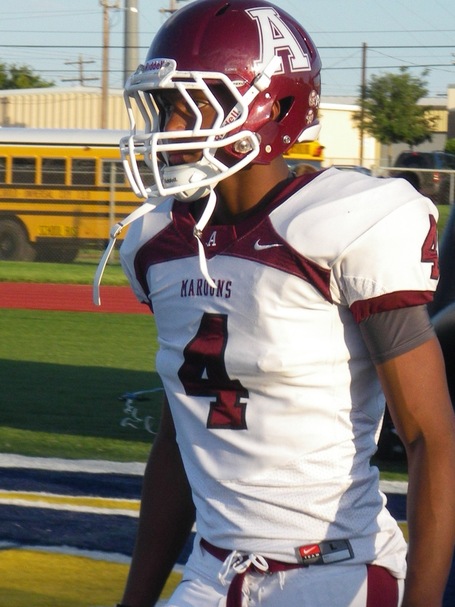 Cayleb Jones, junior Austin High wide receiver -- Given his various injuries (the elbow/shoulder injury that kept him out the week before, his knee, and a wrist that required some attention), this was not the game to get a full evaluation on Jones. From the start, Jones did not look like his usual self and it quickly became apparent that he lacked his normal burst, both off the line of scrimmage and coming out of his cuts.

With the game all but out of reach following the first half, Jones did not play in the second half. Based on his effort in the first half, it was clear that Jones wanted to be out on the field contributing, but physically was incapable of doing so at his normal high level. The concern moving forward is not about his toughness, but rather about the ability of his lanky frame to sustain a high number of hits every week.