In Defense of Greg Davis...

Share All sharing options for: In Defense of Greg Davis...

AO is out at Yell Practice, so it's just JA stepping on this grenade.

The general consensus in these parts appears to be that Mack should tar, feather and launch Greg Davis far away with a trebuchet. Fair enough. I'm reminded at times like this though of Adlai Stevenson from the movie 13 Days. While Kennedy's advisers plot a winning nuclear war strategy, Stevenson chimes in that "one of us in the room should be a coward." Ladies and gentlemen, I can be your coward.

This is not a defense of Greg Davis. At least not in a traditional sense and not right now. I wasted a post-graduation Austin visit on that crap and am as pissed off and embarrassed as the rest of you. The play calling was abysmal and unimaginative, Gilbert stared down receivers, threw into double coverage and missed wide open targets, and the running backs and receivers, well, you know. Yet one of us should defend our favorite scapegoat, hence I will play the Devil's Advocate. 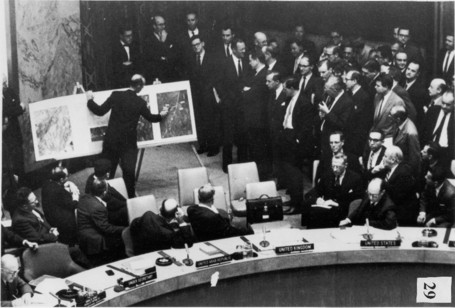 Fielding a punt at the four didn't work for Khrushchev either.

The argument in Davis' favor (if you can call it that) is not that things are going well right now. The offense has sucked all year. But that's nothing new to you. Does Greg Davis deserve the lions share of the blame for that debacle against UCLA? Absolutely. Nothing new here. You're pissed off, I'm pissed off, but calling for the offensive coordinator's head is not the answer because we've been here before. We can believe things will turn around because they've turned around before.

A new QB with a different skillset has led to offensive struggles in three of the last seven years. Transition years are a fact of life in college football. You no doubt remember 2003 and the struggles Vince Young endured developing. He flashed signs of brilliance, just as Gilbert has (although VY did so to a far greater degree, but if GG's ceiling isn't as the greatest college QB of all time I'm okay with that...tangent over), but was inconsistent through a full season's worth of starts before the light turned on for good. Similarly, Colt McCoy was maddeningly inconsistent for nearly two full years before the light turned on in 2008. Sure, Colt and the offense struggled at times in 2009, but if Gilbert struggles his way to 3rd place in the Heisman in a few years, I'll be okay with that.

Is the analogy perfect? Of course not. But Gilbert has now made four starts in his career. If this is the finished product we're going to get with Gilbert, then Davis deserves to be canned. But like it or not, Greg Davis is the man responsible for his development and he's in an unwinnable position. If Gilbert develops into a great QB, as both VY and Colt did, he'll see none of the credit from the fans (as he does now). More than a few Texas fans seem to have forgotten their own calls for VY to be moved to safety or wide receiver in 2004 where his talents wouldn't be wasted.

Davis' response to both VY and Colt's struggles was to develop an offense that played to their strengths, and the results in 2004-2005 and 2008-2009 were extremely positive. Surely Davis' critics can grant him some credit for the light turning on for consecutive quarterbacks and their resulting dramatic improvements. Even the most ardent Davis critic can see the danger that canning Davis now would damage Gilbert, potentially beyond repair.

So, that's it. Is this argument persuasive with you? Yea, I'm not totally buying it either. The offense is really bad, and 3-3 seems like a distinct possibility before the schedule lightens.The scheme is terrible and a change along the offensive line is long past due. I want things to improve as bad as the rest of you, but is firing Davis suddenly going to make things better?

This is a transition year. Quarterbacks grow, offenses change, and coaches adapt. These coaches have done it in the past, and their successful track record (remember that?) suggests that an 8-4 season could lead to better things in 2011. If things don't get better next year, then by all means we should all riot. I'll volunteer AO's car as the first thing we set on fire.

Anyhow, I'm your coward. If you must pelt me with rotten eggs remember my family's motto: not in the face. God save the Queen!