Share All sharing options for: In the Trenches - The Longhorn Saga 2010, Episode V: A New Hope?

All right, people. Buckle your chinstrap. No more screwing around with metaphors, weird humor and strange analogies. This is serious business. We're going to analyze the un-analyzable and attempt, from afar, and without compensation, to propose where the Texas Longhorns' offense can go from here for the rest of 2010. All the remaining games are winnable. We are fans, and we shall overcome the tortoise-like properties of one Greg Davis, fume about the mindlessness of the Horns' senior leadership, or decry the strangely empty results of offensive recruiting over the past 5 years, and as mighty mites irritating the skin of the Texas coaching staff, shall attempt to fix the problem with all of our amateur might. 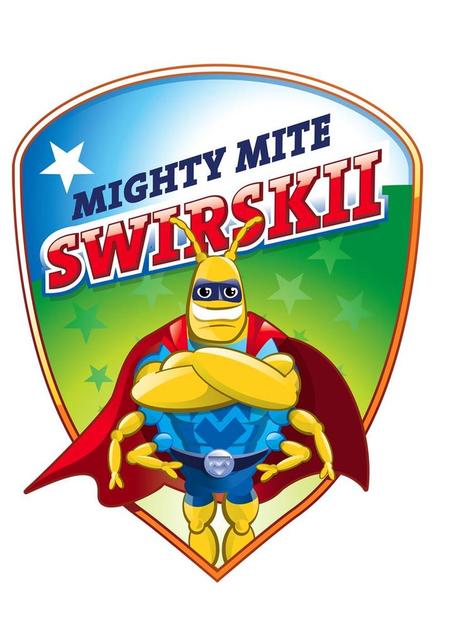 Amateur analysts arise! Descend on the skin of Greg Davis and dare to inject your great wisdom, O mighty mites of the interwebs! There is yet hope to topple the evil empire of of Greg Davis and his polluted vassal, young Garrett Gilbert , and opiated minions otherwise known as the Texas wide receivers and tight ends. Let freedom ring! www.koppertonline.ca

Hope. Defined as "the general feeling that some desire will be fulfilled." Often used in the context of when failure seems imminent, that is to expect a positive outcome when all indicator lights are flashing red, and steam is issuing forth from all apertures, when every instinct is to bail and run for the nearest bomb shelter.

So what exactly is the hope of fans of this tortured version of the Longhorns? Well let's start with the crazy ones and put those out of their misery.

1. Freaky Saturday will descend and Garrett Gilbert will wake up as Vince Young, stride onto the field, run the zone read offense, and vanquish the Sooners. Okay... right...uh... next?

2. Major Applewhite gets the play-calling mantle. Are you kidding me? This is OU week.

3. Greg Davis puts in DJ Monroe for 20 plays and actually runs a (gasp) toss sweep out of the I formation on 8 of them. On the basis of this wrinkle, plus the usual jet sweeps and draws, DJ goes off for 144 yards and 3 touchdowns, and the Horns win 34-10. Greg Davis thinks a toss sweep is a trick play, so we can only run it once a game...next?

4. A Sooner defensive back falls down on Texas' first series, giving up a 70 yard touchdown pass to Malcolm Williams. Jackson Jeffcoat mauls Landry Jones, strips the ball and Sam Acho carries the ball in for a touchdown. Down 14, OU panics a little and passes too much, playing into the strength of the Texas defense. Result: Texas 20 OU 10. That's why they play the game, but hey, let's get real.

6. Greg Davis changes the "rules" for Garrett Gilbert to throw into tighter coverage windows for larger gains. Hmm.... Now we might be getting somewhere.

7. The offensive line finally figures out how to assign protection to asymmetric defensive fronts in which an outside linebacker or defensive end lines up way outside to the offense's left, and the other defensive linemen (and potential blitzing linebacker) crowd the right. This alignment has caused two strip-sack fumbles plus at least two other sacks in Gilbert's five meaningful games, including the MNC. It also produced two sacks on Colt McCoy in the RRS last year. The problem is that Texas has an automatic protection call to shift protection to the right without regard to who is isolated on a TE (!) or left tackle, like Jeremy Beals, which leads to This should be a certain improvement, not a hope. But wait... this has been a problem since last year's OU game. Hmmm...

8. Garrett Gilbert reverts to his second half form from the MNC and begins to look off safeties and linebackers and deliver good passes up the seam. Another possibility.

Hopes 1-4 simply aren't going to happen during a one-week preparation for OU. To find out if hopes 5-8 would make a difference, I break down some plays (take your acetaminophen now, everyone) from the UCLA game after the break.

One of my favorite movies, "Pitch Black," has one of my favorite lines. After the prisoner Riddick saves a few of the other ship passengers from the rapacious night predators, he remarks to his bounty-hunter captor, Johns, "Think about how it could have gone and didn't." A review of last Saturday's tape suggests the converse,: 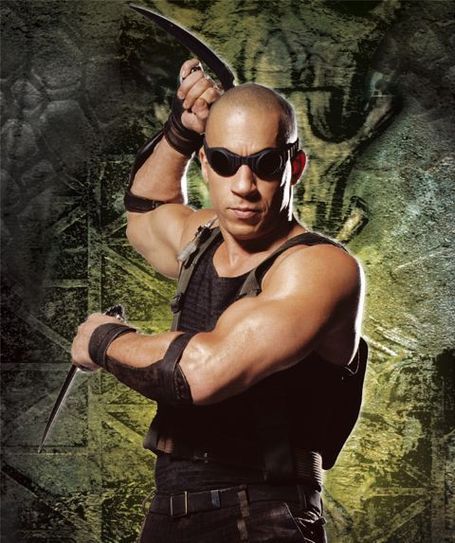 "Think about how it SHOULD have gone and didn't." www.pollsb.com

In mid-season, before the most important (usually) game of the year, there will be no drastic changes like firing someone or re-defining roles or importation of new offensive systems, etc. , at least not on Mack Daddy's watch. So hope springs eternal on the basis of some adjustments Texas can make, given that Greg Davis is calling the plays, that Texas will use its usual complement of badly timed formations, and that there are no freshman wasting on the bench that we haven't already seen.

6. Greg Davis changes the "rules" for Garrett Gilbert to throw into tighter coverage windows for larger gains. Nowhere was this more evident than on the first drive, with the Horns facing third and 5 from the UCLA 41 yard line. A first down here woul likely have been worth 3 points. Texas opens in the 11 personnel (1 back 1 TE) set that they used virtually the whole game, with Gilbert in the shotgun. Mike Davis ran a deep out to the right, which pulled over the deep safety and led the UCLA left corner to leave James Kirkendoll and run up the sideline to take away Mike Davis. James Kirkendoll was wide open, but inexplicably a yard short of the first down marker (which may be why he was abandoned by the corner). Malcolm Williams ran a drag pattern to a seam in the UCLA zone (yellow circle), which at this point in the game was 3 guys, including a linebacker, along the first down marker. His closest defender was a linebacker about 3-4 yards away off his right shoulder. If Gilbert zips a pass to Williams' left shoulder, it's a first down. Instead, he throws to the "most open receiver," Fozzy Whittaker (red circle) 12 yards from the first down, which allows the linebacker and a safety to run up and make the tackle at the line of scrimmage, thereby forcing a punt. 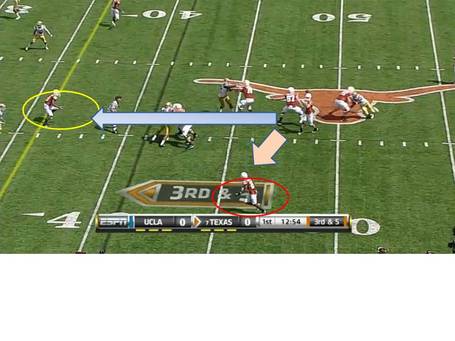 This play and many others in the game indicate that Garrett is either choosing or is instructed to choose the receiver who is "most open" if the primary receiver is double-covered. If this algorithm is changed to the "open receiver in first down position," the drive continues (assuming Malcolm catches the ball). A popular notion ofn the message boardsd is that there were no open receivers many times. Later in the game this may have been true due to UCLA figuring out that Texas receivers only run routes short of the first down marker. Also, apparently, the Texas definition of open means a defender 10 yards away and making the safest possible pass. This is an attitude that can change on short notice and can be implemented this week and might pay huge dividends.

7. The offensive line finally figures out how to assign protection to asymmetric defensive fronts .This means essentially that the linemen are coached to recognize a team's most dangerous pass rusher and do a help check on that rusher rather than just automatically shift pick-up to the side of the line with the most rushers. This problem of dealing with an isolated outside rusher cost Texas twice against Texas Tech in 2008, points in last year's OU game, several sacks against Nebraska in the Big 12 championship game and the strip-sack fumble of Garrett Gilbert against Alabama, and againagainst UCLA (See below). Mac and Greg -YOU CAN FIX THIS NOW! BECAUSE YOU KNOW YOU WILL SEE IT AGAIN!

A great example of this was on Texas' second drive, facing 3rd and 6 from the UCLA 46. Texas went 5 wide and UCLA showed 4 rushers with 3 to Texas' right side and Akeem Ayers, their best pass rusher wide left of Kyle Hix. Only 3 rushed, with Ayers blowing by Hix, Huey double-teaming a rusher 7 yards to Hix's right, and Mason Walters and Britt Mitchell getting split in their double-team by a UCLA defender who meets Ayers at Gilbert and is actually the player who knocks the ball out of Gilbert's hands. 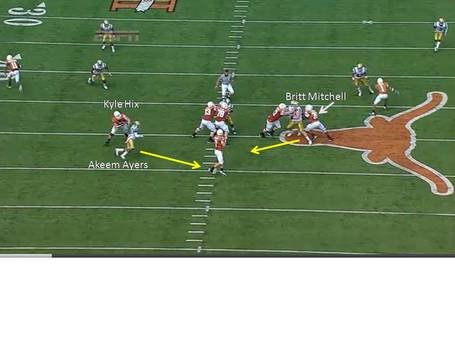 8. Garrett Gilbert reverts to his second half form from the MNC and begins to look off safeties and linebackers and deliver good balls up the seam. A great example of what this might bring was on the third drive, third and five from the UCLA 14 following Emmanual Acho's fumble recovery. Texas goes with 11 personnel again, with Mike Davis slotted inside Malcolm Williams to the right and James Kirkendoll split to the left. Whittaker stays in to block, Kirkendoll gets double-teamed, but puts on a great double move (red circle) to escape to the corner of the end zone. Almost certainly Gilbert overthrew Kirkendoll because of the desire to get the pass over double coverage. As the snapshot below shows, Gilbert had a much easier throw to Greg Smith (yellow circle), who was running a seam route into the end zone unopposed. While not obviously open in this shot, his defender is running parallel to the line of scrimmage, whereas Smith is running a vertical route to the goal line. Protection was excellent on the play, and there were multiple and easier ways to score on this play than the pass to Kirkendoll. 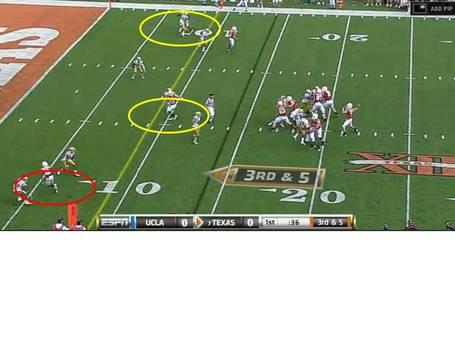 Also of note is that Malcolm Williams at the top of the screen had outside position on the corner covering him with no safety help deep. A nice fade to that corner might have also yielded six.

Perhaps the most revealing thing about this snapshot is that UCLA was completely unconcerned about Texas going deep. All seven cover guys were within 3 yards of the first down marker, and both cover guys on the left bit hard on Kirk's double move, and the nickel back was up on (I believe it was) John Chiles two yards short of the first down, unlike earlier in the game when the corner abandoned the short out to cover underneath the deep out. If teams play Texas this way, the short routes will be a disaster.

Which brings us back to hope number 5.

5. Garrett Gilbert will go deep to Texas' speedy receivers 10 times during the game. The deep pass was there after the first three drives; the Horns just didn't take it much. I get the feeling that Gilbert doesn't even rep it much in practice. When they did take it (twice in the first half), Kirk was open for six, and Mike Davis beat double coverage with a double move and drew a pass interference before being injured. It's out of character for GD to adopt the deep pass because he's always thinking about what could go wrong. But even if Gilbert throws two deep interceptions, defenses are jumping Texas' hot routes so hard that there are many plays to be made. Going deep repeatedly will get the safeties off the crossing routes even if it doesn't result in a score.

So there you have it: Five hopes for episode V of the Longhorn 2010 saga. If the penalties can be cleaned up, and Gilbert is freed to throw to "less open" but better-positioned receivers, and some of the receivers make a few more catches, this offense can score enough to win.