The Horns beat the Raiders.

The win was the largest margin of victory for Texas ever in Lubbock and the worst loss for Texas Tech in United Spirit Arena, which opened in 1999. The last time the Red Raiders lost at home by more an 89-56 loss to Oklahoma in February 1998.

Freshman Tristan Thompson scored 20 points to lead the Longhorns, who kept the pace quick all game.

When he was finished, Thompson explained that he has much to learn about proper positioning near the basket, passing to his teammates and making the right decisions.

"The season's a process," Thompson said. "Every game I'm getting more comfortable in the (low post)."

Been there, done that. Rick Barnes understands Pat Knight's pain.

When you say, "I know how you feel," you actually do; because you've been there, done that.

So when Rick Barnes expresses sympathy for the situation in which Texas Tech coach Pat Knight finds himself -- coaching a team without senior leadership -- Barnes knows what he's talking about.

"It's one of the hardest things you deal with," Barnes said. "People think it's just natural that your older players are always going to lead. Sometimes it just doesn't work out."

Nash thought she had played her final game last spring, and had no intentions of rejoining the Longhorns while attending graduate school this fall. At 23, she had already begun the "next phase" of her life when she received a text message on Dec. 12.

Nash, who had not touched a basketball since March, was asked to consider a return to the Longhorns. The request came from coach Gail Goestenkors.

The season may have been awful, but the post-season has been great.

The proof comes next season, when perception turns into reality. But the pedigrees of Brown's recent hires are strong, especially the track record of the play-caller he will entrust with turning around the most anemic Texas offense in 20 years: Bryan Harsin, hired Friday after five jaw-dropping seasons as the Boise State offensive coordinator.

Maybe you shouldn't say that back in Idaho?

“I don’t think like that. I thought it was neat to be mentioned with some of the guys that they were talking about (as candidates). … When the opportunity came up, I thought it would be a good chance to at least come and have the opportunity to interview and go through the process, which I had never done. I felt like I needed to do this because I’d regret it if I didn’t. … When I came here, it was more than interesting. It was the right place.”

Cole Green isn't motivated by money. He wants something else.

When the Detroit Tigers offered fourth-round pick and Texas pitcher Cole Green a signing bonus in the range of $300,000 last summer, the right-handed pitcher had a tough decision to make. He could take the money or return to the Lone Star State for his senior season.

As the summer progressed, it was obvious there was only was one thing on Green’s mind: helping the Longhorns win their seventh national title. After all, he was a starting pitcher two years ago when the Longhorns lost the national title series to LSU, and was a key cog last season when the ‘Horns were heartbroken following a home super regional series loss to TCU.

Please don't remind us. The Big 12-2 had the worst bowl record.

And did that bowl record teach us anything?

If the Big 12 is going to impress on big stages against other conferences, it has to get better at stopping the run. You saw it in last year's national championship game, which was part of the reason Texas committed to a downhill running game in 2010.

Nebraska's finish left a lot to be desired. The ugly loss to Texas A&M aside, Nebraska was still in position for a Big 12 title and a BCS bowl appearance. So much for that. The Huskers squandered an early 17-0 lead against Oklahoma in the championship, and then laid an absolute egg against Washington, losing 19-7 despite being favored to win by two touchdowns.

So did the Aggies' finish. Texas A&M's ugly loss to LSU doesn't erase the momentum established during its six-game winning streak to close the season, but it certainly delivers a blow.

1. Oklahoma Sooners
After struggling in 2009 because of myriad injuries, Oklahoma coach Bob Stoops seems to have his program back on track. The Sooners finished the 2010 season with a 12-2 record, won a Big 12 title for the seventh time in 11 seasons and ended their five-game losing streak in BCS games by blasting Connecticut 48-20 in the Tostitos Fiesta Bowl. The Sooners might be the team to beat in 2011, with 14 players coming back who have starting experience on offense and 15 on defense. Quarterback Landry Jones gets back his favorite target, Ryan Broyles, who passed on entering the NFL draft to return to school, and all but one offensive lineman is expected back. The Sooners will have to replace leading rusher DeMarco Murray, along with a few key parts on defense -- end Jeremy Beal and safeties Jonathan Nelson and Quinton Carter. Two of OU's toughest Big 12 games (Texas A&M and Missouri) will be played at home and the Sooners will have to make difficult trips to Oklahoma State for the Bedlam Game and Florida State for a key nonconference contest.

ESPN blogger David Ubben put out his own early rankings.

No, Nebraska. No one wants Bo Pelini.

Les Miles and Brady Hoke answered two big questions Tuesday aboard the college football coaching carousel, and the decisions of both reverberated in Nebraska.

First, Miles delivered word that he planned to stay at LSU, informing Athletic Director Joe Alleva after the coach had met with Michigan A.D. Dave Brandon in Baton Rouge, La., on Monday about the Wolverines' job.

Justin Blackmon and Brandon Weedon are returning to OSU.

Doesn't this guy have enough to do?

After announcing Wednesday he was returning to play football at OSU in 2011, Weeden announced he would also be joining the Oklahoma State golf team.

"I forgot to mention I'm also the newest member of the OSU golf team!!!!" Weeden announced via Twitter. "Proud to be part of something special! Football and Golf!!!!"

"He's going to walk on for us," McGraw said in a phone interview. "He's a great leader, he loves golf and he's a great Cowboy."

There is hope? The Sooners found some solace in their loss to Baylor.

Oklahoma didn’t win Tuesday night at the Ferrell Center. But the Sooners stayed within striking range much of the game before Baylor freshman sensation Perry Jones and the Bears finally pulled away for a 74-61 win.

The Aggies are a mystery.

Well, check off all the boxes. We've found one. Say hello to this year's men of mystery: Texas A&M.

The Aggies are 14-1, with quality wins over Temple and Washington, and are ranked in the top 15 in both polls heading into tonight's home game with Oklahoma State, but you can still count coach Mark Turgeon as part of the group that isn't exactly sure what he has.

Be sure to head over to Big 12 Hoops for everything Big 12-2 basketball.

They are recruiting five-year-olds.

The next LeBron James?

Why?  Because he's really good.  The kid can't even read but he was playing against seven and eight-year-olds when he was just four.

They didn't do the chant.

Auburn fans yelled War Eagle. They chanted "It's great ... to be ... an Auburn Ti-ger!" They tossed rolls of toilet paper in honor of the folks back home who had so thoroughly covered Toomer's Corner in TP that those with untrained eyes would never have known the worst of the snow storm that ripped through Alabama had missed Auburn.

But they didn't chant S-E-C.

The SEC is the KIng of all conferences.

It's about brand loyalty. Right now SEC fans are addicted. A fight broke out in the BBVA Compass Bowl last week between Kentucky and Pittsburgh. Fans in Birmingham's Legion Field began chanting "SEC! SEC!" There is anecdotal evidence of the same happening on Bourbon Street during Sugar Bowl week when an altercation erupted between Ohio State and Arkansas fans. These people don't just buy souvenirs, they name their children Archie and Herschel and Bo.

LSU's coach staying true to his (adopted) school came Tuesday when Miles recommitted to the Tigers. That ended a second flirtation with his alma mater, Michigan. There isn't going to be a third. By staying in Baton Rouge, Crazy Les said it without saying it: He had switched dream jobs from Michigan to LSU.

Following the gravy train of college sports and the BCS...money. 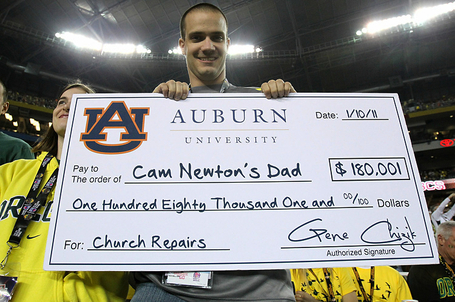 Keep talking about gridiron justice and huge payouts and fan demand, keep throwing fits and talking like Robespierre in the French Revolution, and no one in the ivory towers of chancellor offices or the NCAA will lift an eyebrow.

But start talking about Kyle Brotzman, and maybe you've got an audience.

We're not waiting around for that playoff, either.

I am hopeful that there will come a day when there's a playoff in college football, but I'm not holding my breath about it either. I suspect that day is a ways off, but as our man Berry Tramel wrote today, there's a growing body of reasons why a playoff is needed. The latest is having kids who are kicking $12 million field goals. The NCAA doesn't like that kind of thing, and it might be something that moves them to action.

Christina-Taylor Green, the 9-year-old Arizona shooting victim, is the daughter of Dodgers national scout John Green and granddaughter of former major league manager Dallas Green. Our thoughts and prayers go out to her family and friends.

BDR doesn't endorse any of the rubbish that is out there, we just link to it. If you happen to find something on the interwebs that might be of interest, please send the link to dimecoverage at gmail.com.